2013 has been an AMAZINGLY fruitful year! The talent of our Ink Slingers and their ability to convey the Faith in a variety of ways to meet you where you are in your faith walk, our prayer campaigns shared exclusively through our Facebook fan page, our prayer intentions on the fan page as well as the website, our splash onto the Instagram scene with our debut Lenten photo challenge, our saint of the day photos, Catholic Nerd series created for chuckles, our daily #WFD posts on Facebook {that’s What’s For Dinner for all you greenhorns!}, our strong presence at the DC March for Life on Twitter and lastly, quadrupling our following on Pinterest, this year has been marked with a lot of projects and activities, all centered on sharing the Faith. I am excited that we have had a well-balanced presence on the most popular social media platforms!

Though the primary mission of Catholic Sistas has always been 1) to inspire others to learn and grow in the Faith {transmission of the Faith} and 2) to connect others through prayer, I am pleased to be able to offer something else I find important and almost integral in the life of a Catholic – being connected to other Catholics and Catholic resources to assist our ongoing faith formation. Our Pinterest account exploded this year! After careful review of the content we were offering in early 2013, it became necessary to restructure the boards. All this means is the boards that were broad in nature were carved into specific niches, creating a more streamlined experience for both myself as well as all our followers. In April, I took over the Pinterest account responsibilities and saw how much the previous ladies had done, first Heidi and later Birgit. It was incredible to me the amount of work they put into getting it where it was! I initially had some reservation about making changes, but knew it was inevitable. The account went from 30+ boards to currently sitting at 120+ boards, with a few more on the horizon {mostly taking broad categories and carving them out a bit}. 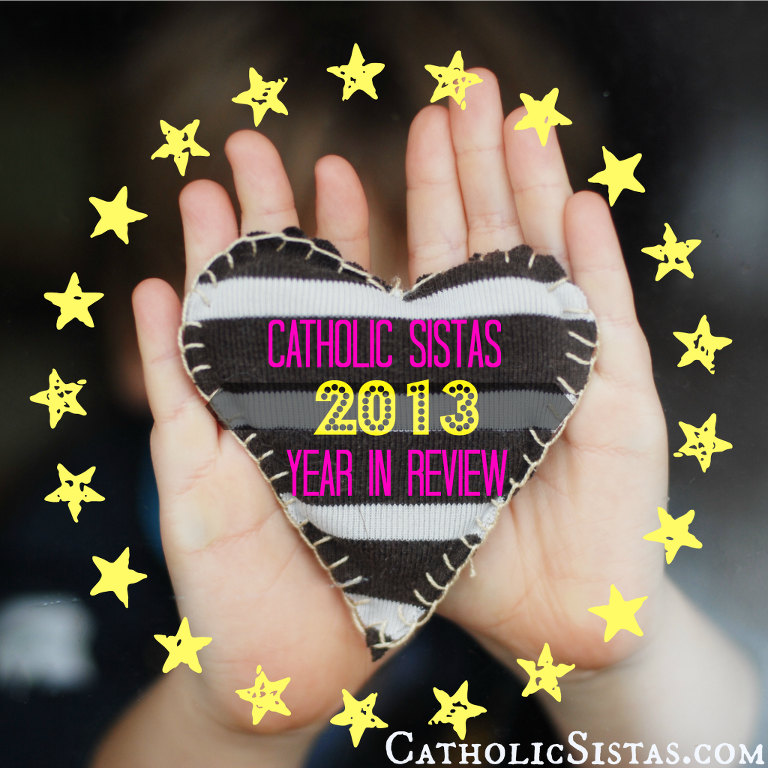 Because our schedules are so busy and our time precious, this became the motivation for me to create very specific boards for our Pinterest account. I want our followers to find what they need and pin it and not get sucked into the Pinterest vortex! From all things Catholic, such as feast days by the month, Catholic homeschooling, sacraments, vocations, our pope, respect life, articles, youth ministry ideas, and domestic church, to food, design, homeschool resources, organizing, fashion and more, you will find there is something for everyone! If you have not yet ventured into the world of Pinterest, I invite you to come check us out. I even wrote a how-to article on Pinterest for those interested in the pros and cons from a Catholic perspective. We have become one of the largest, most organized Catholic Pinterest accounts and look forward to your company!

Our 10 most popular posts for 2013 are the following, thanks in part to our readers like you who continue to support us by reading and praying for the blog and its mission. Without further ado, I give you:

10) Getting Over the Free-Range Chicken Syndrome, Order in {Catholic} Homeschooling

9) Why Christians Opened the Door to Gay Marriage

6) A Chemist Believes in Transubstantiation

4) We Will Remember: How Being Chained to An Abortion Table Saved a Life

2) Will the Next Pope Be the Antichrist? The Last Pope? Is The End Near? and other burning questions

If you could continue to keep Catholic Sistas in your prayers as we head into 2014, I sure would appreciate it! With a simple mission, it allows us to explore so many avenues, ideas and projects and we always make every effort to place God at the center of those decisions.

Thank you, friends, and God bless. 🙂

« Wordless Wednesday, Christmas EditionA Day in the Life of the Holy Family »