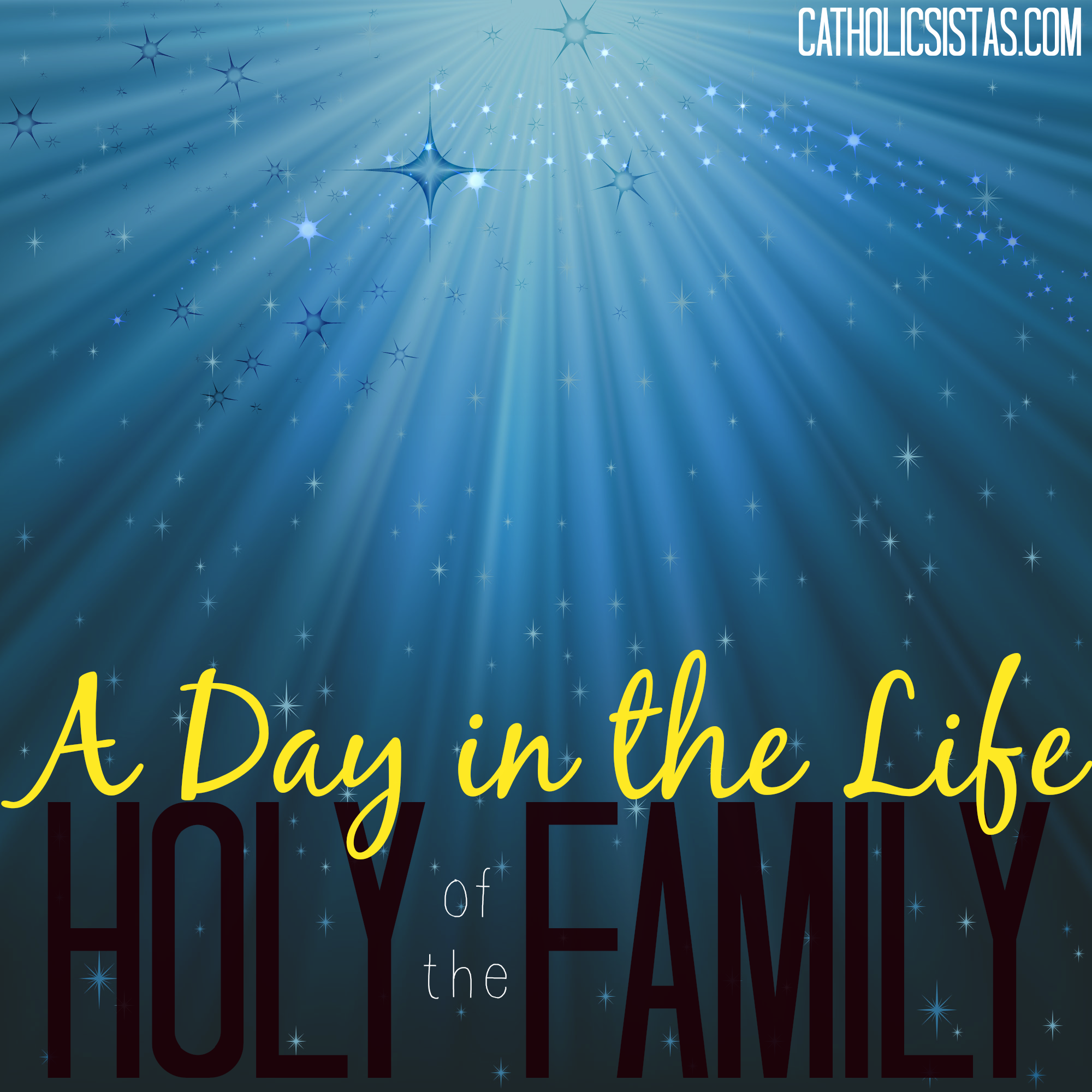 With the decline of the family becoming very evident already in the late 1800’s, Pope Leo 13th endeavored to promote the feast day of the Holy Family in hopes that the Holy family would be an inspiration to the world.  But long, long before our modern day popes were concerned with the breakdown of today’s family life – St John Chrysostom (344 – 407 AD) was urging families to look to the Holy family for inspiration as how to make the family a domestic church.

But in order to be inspired by someone, or something , one must come to know it. So with that in mind – let’s take a moment and in our minds eye take a little time to imagine what life must have been like for the Holy Family the morning St. Joseph woke from that second incredible dream. 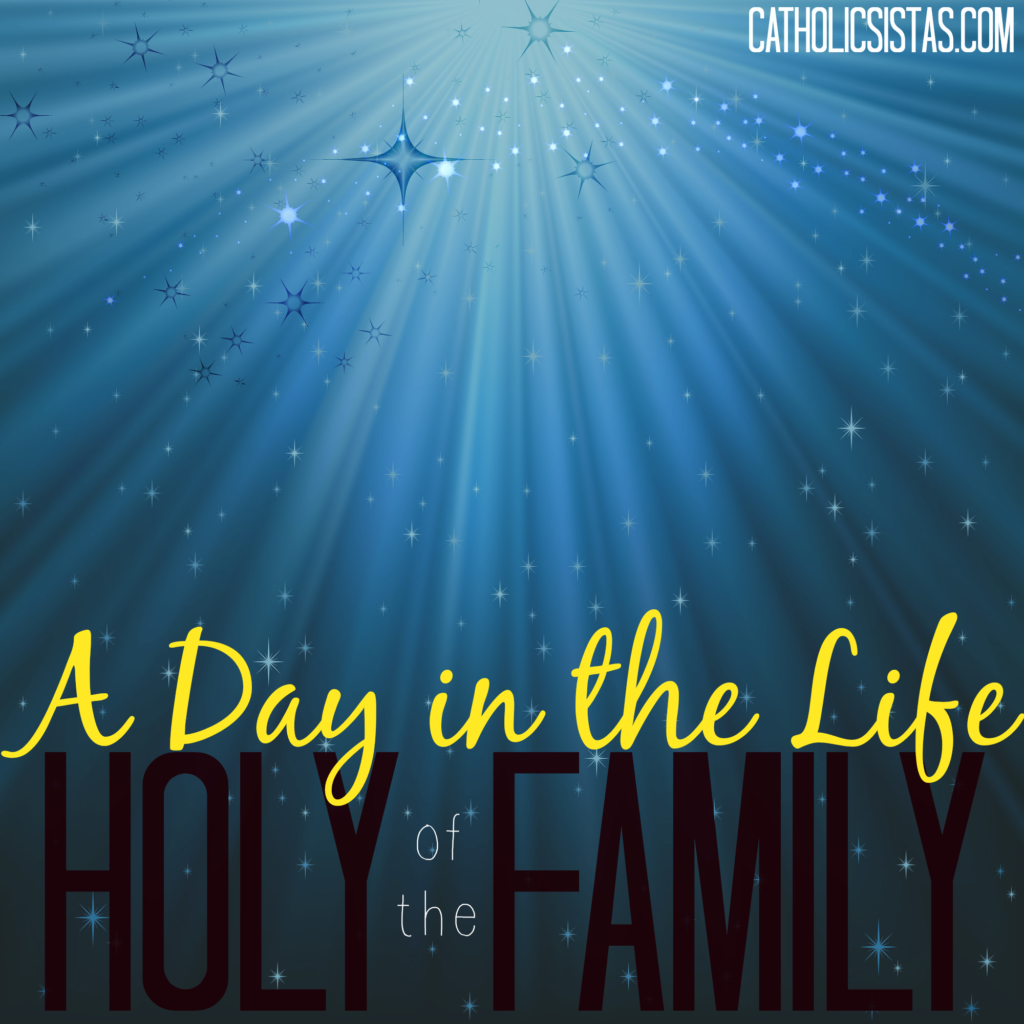 Joseph rolled over onto his back and stared up at the roof of the cave – smudged in places from the soot of the small fire kept burning near the front. Rubbing the sleep from his eyes, he resisted the urge to shake his head in hopes of clearing of his mind. The roughness of the stone that was his pillow would not be softened any by this action. He pushed himself up on one arm and stared at the tiny baby wrapped in Mary’s arm and winced. What would she think when he woke her to tell her that they must, on the basis of a dream, pack their meager belongings once more and this time head out, not towards an ancestral home, but for a land unknown to either of them? Egypt! The angel had been very clear on that.

Well, nothing to do but to get moving he decided. Wasting time lingering in the heavy large shawl he had slept in would not serve anyone. Still, he mused, no need to wake Mary and the babe just yet. This was not going to be an easy journey.  The caravan they had traveled with to Bethlehem had long ago reassembled and returned to Nazareth. But with Mary recovering from birth and such an arduous journey to Bethlehem, Joseph had opted to remain in Bethlehem for a while. He had earned a few coins doing the odd carpentry job here and there, though not enough to cover the foodstuffs they would need to procure in order to eat on such a long walk to … Egypt!  Thankfully they had not needed to spend any of the gold the three men had brought with them to give to the baby Jesus.

Joseph deftly rolled up the shawl, tucked it away and then added fuel to the smoking coals left in the small fire pit. He grabbed a gourd and headed to the community well where he quickly filled it with fresh water. Once back in the cave he rested the water near the folded shawl and knelt to wake Mary.  Gently he touched her shoulder and smiled as her eyelids fluttered and then opened. Mary’s smile was brief as she noted the look of concern deeply etched on Joseph’s face. Trying to avoid waking the baby – she gingerly wiggled out from under the wraps covering her.

“What is it Joseph?” she whispered. Her deep brown eyes searched his face as he sat there puzzling how to tell her of his dream.

He sat back and absently picked up a stone and quietly rolled it about in his hand. For not the first time Mary studied the strong fingers as they deftly moved the pebble in and out. Carpenters hands studded with scars from chisel hits. She patiently waited. She knew he would speak when he was ready.

“Remember the dream I had, after our betrothal, Mary?”

Startled by this remembrance, Mary nodded somberly and waited. Her dark hair slid forward as she shifted, trying to find a more comfortable position on the hard stone.

“I’ve had another… it was a most fearsome dream, Mary. The angel warned me that Herod is looking… looking our baby. Our dear sweet Jesus!”

Mary started, and protectively placed her hand on the sleeping child.  “What do you mean Joseph, looking for Jesus? To take him away from us?”

“No, much worse Mary. He is deathly afraid of the child growing into a man and taking his kingdom from him!”

“Why that’s just ridiculous Joseph, we both know -“

“Shh, yes Mary – we both know… but Herod obviously doesn’t. “

“So what does the angel want us to do, are we supposed to hide him somehow – how will we hide him until he’s grown?”

Joseph hesitated for a moment and then taking Mary’s other hand he held it tight. “Mary, the angel has told me that we must escape to Egypt.”

Her fingers tightened around his and she sat there absorbing the news.

Then she straightened her shoulders, caressed the baby’s round cheek gently before whispering “We had better begin to prepare, I guess.”

Joseph helped her up and bent to help her collect the heavy wraps from where they had fallen. The baby stirred and Mary gathered him up.  She turned worried eyes to Joseph; “How long do we have to get ready. It took several days to gather all we needed when we left Nazareth… ” her voice trailed off.

Joseph rolled the wraps up and tied them with some leather thongs and placed them with the shawl he’d folded earlier.  “I don’t think there is much time. I want to be on the road by late afternoon if at all possible. “

Seeing the worried surprise in her eyes he pulled her near him and hugged her and the baby close. “It will be ok, Mary. The lord will provide. He always has, right?”

Mary smiled her agreement. “Yes he has. Actually I guess that might be why those men left the gold. Our lord must have guided them to us for that very reason. Those gold pieces will make it much easier to get the food we need for –  actually, how long do you think it will take us to get there, Joseph? “

“It’s over 400 miles just to reach the outer parts of Egypt, so I think we will be at least three weeks on the road, maybe four. There are some settlements and villages on the way so we can freshen our supplies as we go, though there is no guarantee of fresh rain water so I will see if I can buy a an extra wine skin or two in the market today. We are down to only a cupful of cleansing water as it is. Let’s cleanse our hands now, say our morning prayers Mary, and have a bite to eat before we start our preparations. I will try to find a caravan. The road we will take to Egypt will be less treacherous than it was to reach Bethlehem, but I would feel better if we traveled with at least one other family.

Mary cuddled baby Jesus close to her heart and smiled at Joseph before tenderly kissing the sweet baby’s forehead. She sat and patted the rock beside her. “Come Joseph, sit and tell me a little more of the angel who came to you last night? Was he as fearful as Gabriel?”

She stirred the embers and Joseph reached for the flat rock they would bake their flat bread on. Knowing their Lord would provide, our Holy family  broke their nightly fast together, and planed for the long journey ahead.