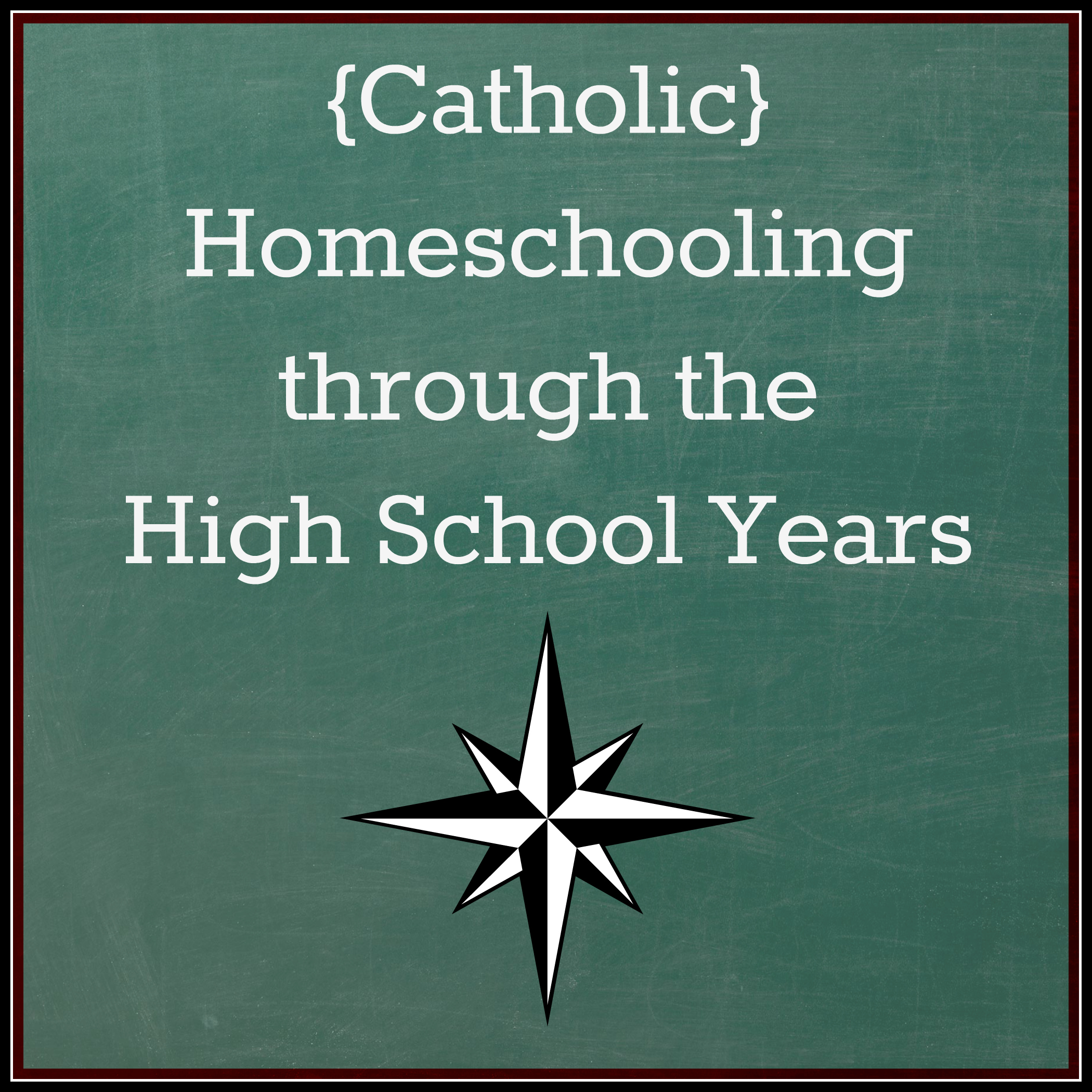 One of the scariest tasks I have had to endure is homeschooling our oldest child through high school.  He is currently a Senior and it is only early November and boy have we had a busy year!

One of the things that I worried most about was, ahem, the social issues.  I did not want him to miss out on Prom, and band, and any other great opportunity he might have had at the local public school.  So for the first time, my husband and I when finishing the eighth grade, offered him the opportunity to go to a brick and mortar school.  His reply was quick, short and to the point and completely convinced me that he was spot on.  He said, “why would I want to expose myself to things that would damage my soul?” and went on to list things that on a moral level, would not be healthy.  He was right and since we did give him this choice, we honored his very mature response.  I should add, at this point he had only been homeschooled for three years as he went to a Catholic School from Preschool until the fifth grade. So once I let it sink in that I had to figure out his high school curricula, I got started on researching what we wanted to do.  I had taught in the past for fifteen years but always avoided jobs at the high school level.

Since he wanted to study music and I am not musically inclined, this was a bit of a daunting task.  In hindsight, I can tell you even an area where mom is not familiar with is definitely possible.  Through speaking with people and asking for help from those in our area we were able to supply him with ample opportunities to train, participate and perform in many areas of music he was interested in.  Here are the examples of what we did to make this happen for our son:

CURRICULUM
Finding programs to choose from was not hard, there was Seton, Kolbe, Our Lady of Victory, Mother of Divine Grace, etc., I could just enroll him in a program and move on.  But, up to this point, I had learned that I loved the flexibility of planning out the curriculum to his liking.  So I decided we did not want to enroll but I did want lesson plans I could buy so that I had a spine to work from and not get overwhelmed.  I did have four other children in the house to think of as well.  So we decided to go with Our Lady of Victory because for $85, I was able to purchase lesson plans with Quarter exams a la cart.  This was very helpful as we selected the literature, science, history, religion, etc., we wanted.  This way we had the flexibility we liked but were not recreating the wheel sort of speak.  We used Our Lady of Victory for grades nine and ten exclusively except for Mathematics because we had found Jacob’s Math and loved it.  I also added music courses I wrote myself with my son’s help.

SOCIALIZATION
For the social aspect, we joined the local homeschooling groups and asked around about dances, and events that most homeschooled teenagers were involved in.  There were several balls he attended and about an hour away, homeschoolers from the surrounding areas organized a Homeschooling Prom.  Aside from actual planned events, there were casual opportunities to go to the movies in groups and also just hanging out with friends.  Much of the real socializing he did while participating in extracurricular activities found in the next paragraph.

EXTRACURRICULAR ACTIVITIES
Thankfully, our FSSP parish has a large amount of homeschooling families so finding friends his age was not so difficult. Locally, we found a college that offered a Community Choir with rehearsals every Tuesday night and performances each semester.  So he got to help the community offering free concerts and also got experience being directed by a college professor and participating with a choir.  He also made friends with some of the students at the college who were also studying music, something he was considering since the ninth grade.  In addition to this, we asked our Schola director (choir) if he could try out and sing with them.  This lead to finding out he had a great singing voice and she offered to give him private lessons each week.  So my seventeen year old loves to spend his Friday nights practicing with the schola at our parish and then many times they all go out to eat dinner or just for a yummy ice cream treat.  Many of the families involved in the schola have volunteered to give him a ride there and back when he did not have a driver’s license which was super helpful since we have little ones at home. In addition, he attended the Sacred Music Colloquium which was held at Duquesne University last year. This was a week long event, he attended classes, was able to present a composition piece he wrote and also get to sing with the choir at this event.  He was able to meet prominent people in the Catholic music world as well, which was fantastic as well as priests in love with proper liturgical music. Lastly, we found out the local Coffee Shop had an open mic night and he and his friend got together a series of songs to play together, he played the accordion while she played the violin as a fiddle.

RELIGIOUS PARTICIPATION
An additional aspect I did not want him to miss out on was participating in religious events.  He did attend Catholic School when in a brick and mortar, so looking for opportunities to participate in retreats and pilgrimages was important for us.  One of the best experiences he had aside from participating in the liturgy at our parish and singing for the Schola, was the Auresville Pilgrimage he had the chance to attend twice during his high school years. This is a four day event where they walk 20-25 miles per day following the steps of the North American Martyrs.  During this time they have access to traditional priests, confessions, and spiritual direction.  On the last day they have a Mass which everyone is invited and he has had a chance to sing with them.  He was also fortunate to attend a camp that was more like a retreat with the Brothers Slaves of the Immaculate Heart of Mary in Massachusetts.  Their retreat is open to any young man in high school.  The neat part was they did camping activities as well as getting as spiritual component to their week long event.  He really fell in love with Saint Louis de Monfort and has since consecrated himself to the Immaculate Heart of Mary.  In addition to this, once he turns 18, he will be visiting Our Lady of Guadalupe Seminary in Denton, Nebraska for a week.  He will be able to see how the seminarians spend they days and nights and participate in daily prayers.

Looking back to the last four years of his high school career he has been able to learn enough to flourish in both voice and musical instruments of his liking.  He has participated in social activities, and also in musical activities, but most importantly, also in activities that have allowed his spirituality to grow!  So it is possible to home educate through the high school years that allow your student ample opportunities to participate in similar social and educational activities as if he was in the local high school.  I would even dare to say, he has had a better experience from home even though I was not musical at all.  Looking for people around you to help you in the areas your child is interested in and asking for help is vital in allowing him or her ample opportunities which will help him through his university career.  If I could do it, so could you!

I would love to hear of others and their experience with homeschooling through high school.  How were you able to provide your child with ample opportunities in your area?  How did your child participate in spiritual activities, social activities and lastly extracurricular activities while spending very little money on these things?