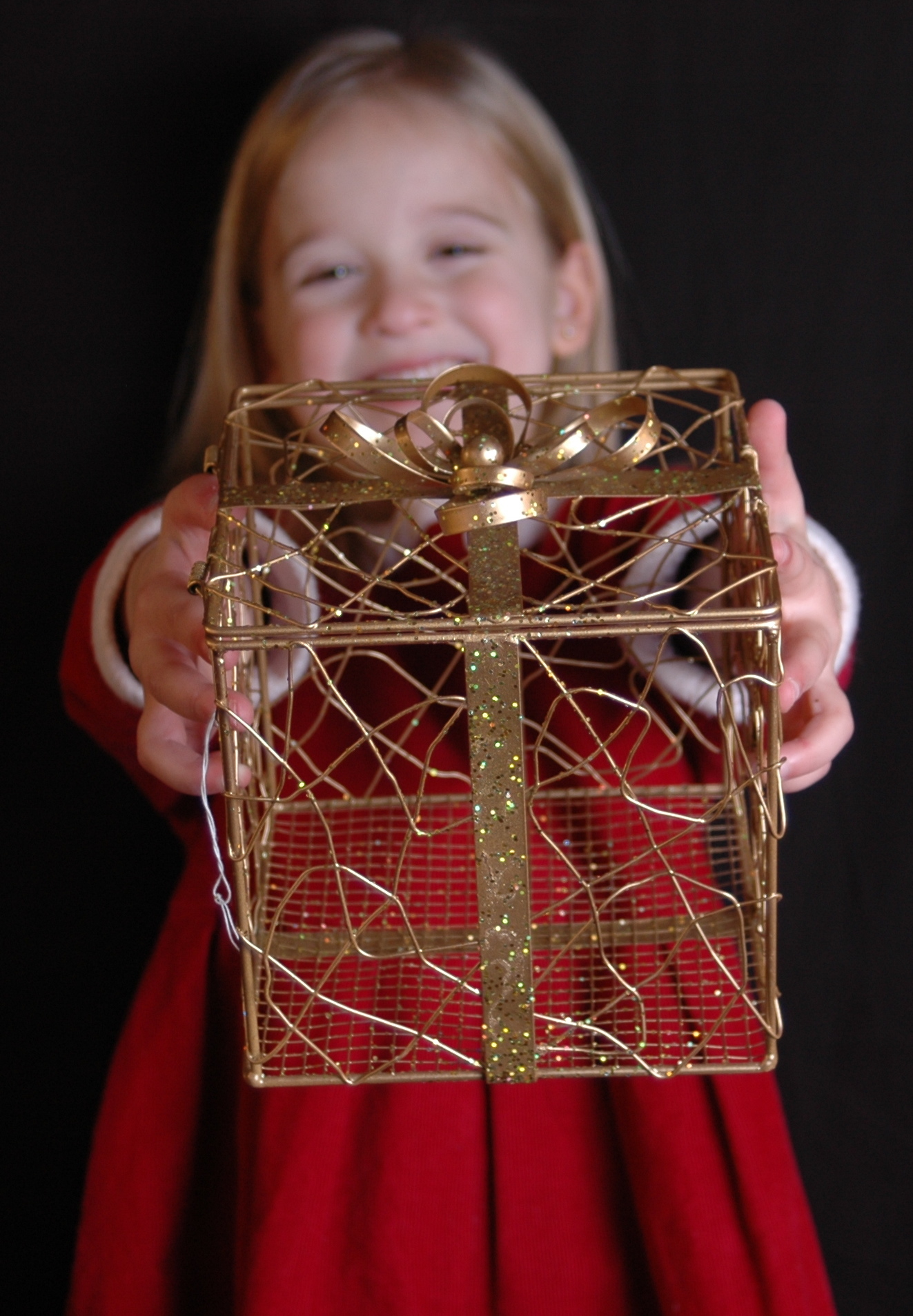 There is one simple choice our family has made over the last ten years that has surprised me. We do not make Wish Lists. Let me explain by sketching a story.
—–

It starts out innocent enough. When the baby’s first Christmas finally comes, you are ecstatic about surprising him with the bright new baby toys on Christmas morning. With genuine glee, you watch as he fumbles with the wrapping paper, and you watch every sweet reaction as he discovers the new toys before him for the first time.

When she is two, you just know she will play with that first doll forever, and it is a milestone you will never forget. When she is three, you wait with palpable excitement to capture her delightful squeals as she walks down the stairs and discovers the Dream Land of Toys that awaits her.

And so it goes.

By the time he or she is four or five, the compiling of the Wish List has become an annual event. “What do you want Santa to bring you, Honey?”

Christmas morning is the one morning of the whole year when grand dreams of toys and candy come true; so by six, seven, eight, nine, ten, little him or her slowly evolves to anticipate that Wish List for months in advance. “What shall I ask for? This is my chance, make it big!”

It is so fun to fulfill those little dreams, and relatively easy to buy just what is wished for. The joy and smiles on those faces Christmas morning are worth everything. You live for it every bit as much as they do.

At eleven and twelve, the little man starts to show interest in electronics. By thirteen and fourteen that little lady has developed her own taste in clothes which, to your chagrin, is not consistent with your taste in her clothes, but oh what does it matter? It is Christmas. Give her something special. Get him the big game system. Fourteen only comes once.

By fifteen that Wish List starts to come with instructions, “Do not buy me anything but what is on this list. Do. Not.”

A little taken back, you excuse the behavior because, after all, this is when kids start to spread their wings and become independent. You negotiate; some things you might buy her, some things are off the table.

And so it goes.

There is an expectation that the Wish List will be fulfilled. That Christmas morning adrenaline rush and all its dream-come-true satisfaction is a bit of an addiction. The teenager not only plans for the Wish List all year long, but plans for the negotiations as well. She asks for things she knows are off the table, but wears you down so the thing she really, really wants, but knows you cannot afford, might just appear Christmas morning anyway. You feel guilty for rejecting so many things, so you give in and buy the less expensive, but still too expensive items. He needs an iPhone 5, never mind that he doesn’t even know what the iPhone 5 does that the iPhone 4 does not do. She needs the $50 t-shirt with skull and cross bones because it is just what kids wear, “Come on Mom, get with it.”

When it gets to the point where you realize Christmas is out of control, alas, it is too late. What happened incrementally over all those years cannot be undone with a mere wish of your own.

Why do you think grown men and women knock each other down on Black Friday each year to buy items they think they cannot live without? Why do you think malls are packed with people spending money they do not have? Gift-givers need to be the Dream-Maker as much as the Wish List-Maker needs to have the Dream Land. Who is Christmas all about anyway?

I have watched this happen more times than I will admit. When my husband and I began raising our young children, I started out, as most mommies do, fussing over just the right gift to get our babies, and our parents and relatives; I fussed and fretted, and fretted and fussed. After a couple of years, my husband made the observation that I hated the time between Thanksgiving and Christmas, and he was right. I did. I dreaded it all year long. When I converted to Catholicism, and understood that this time was also the time of Advent (I never knew that), I had an epiphany. The season is about the gift of Christmas, the gift of salvation. And that is the thing.

Gifts are supposed to be received, not demanded.

So I banned the Wish List. I know, “Boo!” When the kids got old enough to see their friends making them and asked if they could make a list too, I told them that if they made a list it didn’t mean they would actually get anything on it. When commercials come on, even now, and they want a flashy new toy, I flatly say, “You don’t need that.”

“Sure, when you can buy it for yourself.”

Harsh? Maybe, but all I know is this: They don’t know what it means to compile a Wish List. And I don’t dread Christmas anymore. Beyond that — get this — it is instilling in them an understanding that making demands is inappropriate. “You get what you get and you don’t get upset.” Life lesson, kiddos.

It helped me too. I was happier when I learned to appreciate what I’m given in life, whether at first I like it or not. There is always some good to find in any gift (including the bags of candy the nice ladies at church give the kids every week, which they fight over until I want to burn it down to carbon). Every gift is an act of kindness, and that’s enough. Plus, sometimes really wise people see more in us than we see in ourselves.

No one made a Wish List for Redemption, after all, but the human race pined for it nonetheless.

Has this hard line been worth it? Absolutely. I get all of my Christmas shopping done in an enjoyable, but short, span of time. We get the kids one gift each — they don’t get to pick it — and a pair of pajamas. You know what? They love it. They actually are grateful for those small gifts. It frees our family to focus on the real Gift of Christmas. In a lot of ways it’s turned the normal mornings throughout the year into that Dream Land, that mystical, awesome experience that some people only think exists in material shiny form one day a year. I’ll take that. 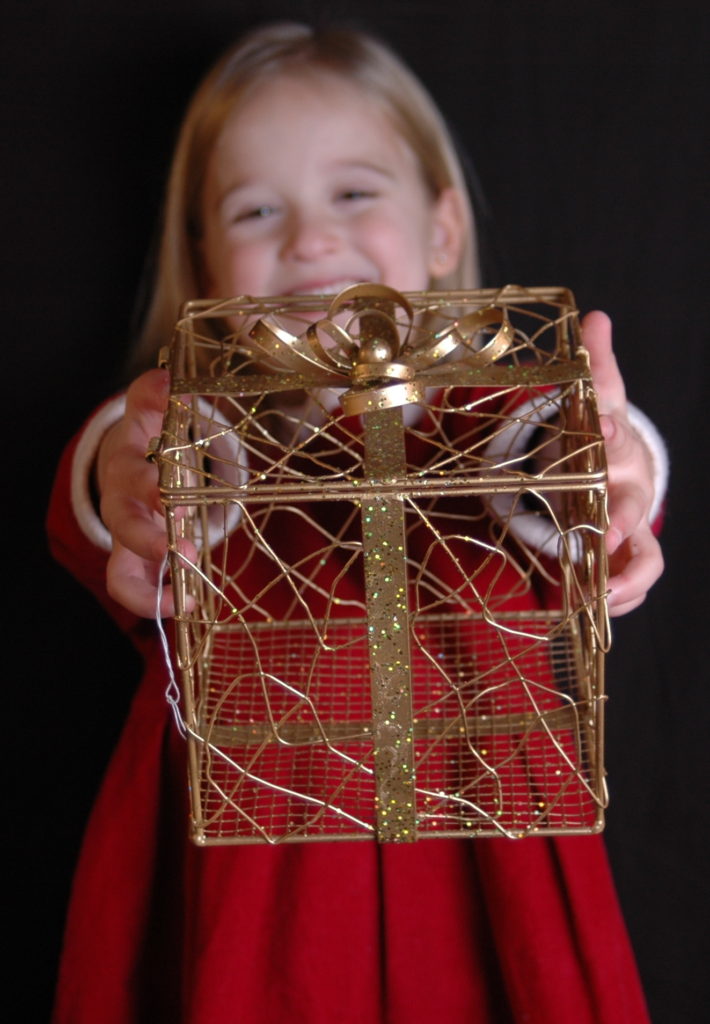