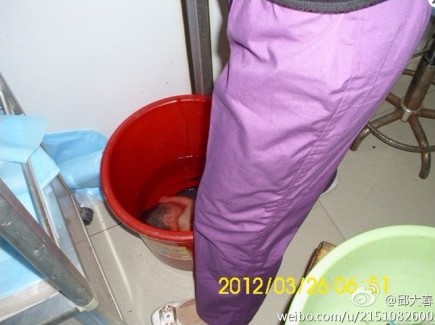 The new Internet outrage? A photo of a full term baby drowned in a bucket of water after a forced abortion in China. People are outraged and disgusted, as they should be. This photo has been shared countless thousands of times on facebook now and supposedly was shared at viral quantities over in China after the photo was released. You can read the full story HERE.
This is beyond disgusting. One word. Communism. This is only ONE case out of millions. Chinese mothers are being kidnapped, tied down and forced to abort their unborn. Read this woman’s story HERE.
Then if their baby still isn’t dead after all this, they drown them or shoot their heads full of poison or downright smash their skulls in and then throw them out into dumpsters like rotten garbage. Shocking isn’t it? Disgusting beyond belief? You bet. But why exactly are people so SHOCKED over this? Because that “fetus/clump of cells” is actually a BABY and not a clump of lifeless cells after all? This baby, this sweet innocent child finally put a face to this horror. Humans, being naturally compassionate, are horrified because they finally saw a snapshot of reality.
WTH people?! This is happening countless thousands of times a day all over the world. Babies, all the way to full term and even after birth are the victims of heinous crimes of violence. They are mutilated, chopped to pieces, sucked out of their mother’s wombs by vacuums, shot in the head with poison, drowned, their heads crushed, their body’s disposed of as though they were useless sacks of meat. Pro-CHOICE people are condoning this every.single.time they call themselves “pro-choice.” It’s apparently ok to murder unborn and even born children if they are inconvenient or unwanted by the parents. Infanticide is happening right now as you read this, all over the world. What do most people do? They turn a blind eye to it. They pretend like it’s not happening. They want to be politically correct and blend in with the liberal crowd who condone evil and so they call themselves “pro-choice.” More like “pro-murder-your-child-if-you-want.” They refuse to put faces to these children. They tell themselves they aren’t even human and don’t deserve the right to live. Why is it that our society of death is so shocked by this photo? A drowned baby in a bucket thrown into the corner does not even begin to show the reality of what’s really going on.

Chinese mothers can only have one child. If they get pregnant with a second the government tracks them down, kidnaps them and forcefully murders their child that they so desperately want. What do Americans do in general? They have their one or two token children and then refuse to have anymore because children are inconvenient and it means not buying that new car or house.
It means no more partying and coming home drunk and having sex with whoever you want. It means being a responsible adult.So what do they do? They convince themselves that they aren’t pregnant with a baby(even though it is scientifically proven that life begins at conception) and they go and volunteer their child’s life up for their own benefit. Some might say “the baby is only a couple weeks old…It can’t feel pain.” Umm…Can you prove that? And even if the child can’t feel pain, does that condone murder? Oh and just so you know, it is not uncommon for women in the USA to have abortions all the way into the third trimester.

The only difference between China and ourselves is that we are not YET forced to have an abortion – thank God! – but babies are still being murdered the same way and thrown into dumpsters, regardless. Don’t be fooled though because that is the path we are heading down very quickly. Obama has tricked so many fools. He is trying to get the HHS Mandate passed and it will be a huge step towards communism. The government is trying to force us all to pay for abortions, sterilization and birth control(which is also an abortifacient) because he has no morals and these children have no faces to him. He wants to be sure we have blood on our hands right along with him. This goes way beyond “affordable health-care for women.” This is just plain evil. Anyone who does not see this forces their eyes closed and covers their ears, screaming “it’s not true, it isn’t happening.” Obama is trying to force YOU to pay for that baby to be drowned. Obama is trying to force you to pay for that baby’s head to be injected with poison or his/her head smashed in. I, for one, would rather not have health-care at all then know that I knowingly put even a penny towards the murder of a child. I don’t want to face God and tell him that it was too “inconvenient” to stand up and fight for these children and that it was much easier to bow down, kiss Obama’s a** and pay for these demonic baby-slaying abortions. Yes, you’ve been horribly lied to. There is absolutely nothing in any way shape or form that is good about Obama-care. If you have any morals at all you will absolutely NOT support the HHS Mandate or any of the evil things our president and government are trying to force down our throats. Don’t turn a blind eye to what is really going on not only in our country but other’s like China. Be the first to stand up for the basic human rights of these children – LIFE!

Please do be horrified by this picture and please let this be a wake up call. This is happening in your own town, right down the street from you. Every time you call yourself “pro-choice” you are telling the world that you believe a woman has the right to choose whether her child lives or dies according to what she feels she wants or needs with no regard to the child. You are condoning the drowning of the full term baby in this picture. Either you are for what this picture represents or you aren’t. There is NO grey area here. DO NOT support abortion in any way, shape or form and that includes calling yourself pro-choice or giving your money to anybody/thing that supports abortion. Boycott the companies who donate any amount of money to Planned Parenthood (the biggest abortion slaughterhouse in the US) to name a few big ones: SGK – Susan G.Koman breast cancer foundation, Girl Scouts, PayPal and Ebay,etc. View the list to boycott HERE.

DO NOT support China! America is a HUGE consumer of Chinese products and that money is going towards the communist government, forced abortions and slave labor. Don’t buy Chinese cr**! Thirdly, for your own good and the good of our beloved country just STOP supporting Obama and his plans of suicide and destruction. Don’t vote for him. Don’t support the HHS Mandate which is a baby slaughtering move on the government’s big ole’ chessboard. They are using you as their pawns.
Be the first to stand up and say NO! Fight for the rights of unborn children! They cannot speak for themselves and they are the current victims of the biggest ever holocaust on earth. Their silent cries go unheard because too many people turn a blind eye to their deaths.Thousands of them being brutally murdered daily but it goes unnoticed by the majority because it’s not “politically correct” to fight for them. Educate yourself on what is REALLY going on in this world and don’t let the evil surrounding us fool you. Do not let this child’s death be in vain. If enough people stand up and fight this child will have died a martyr for many others who cannot defend themselves against this horror.

« Of Nail Polish and Elbow GreaseCrucify Him! »