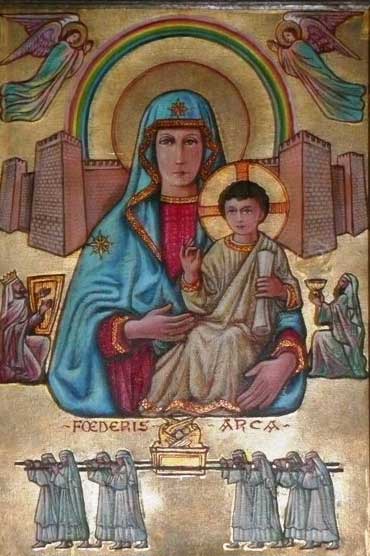 Mary, as the new ark of the covenant, is my favorite Old Testament type ~ designed and built for beauty inside and outside, dwelled over by God’s Shekinah glory, bearing within the visible law, manna, and priestly prop, treated with the utmost respect and joy. Everything in the Old Testament is a picture, a perfecting, a positioning of the New Testament. 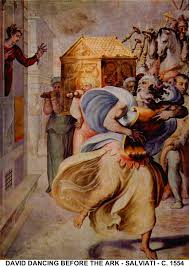 The ark of the covenant:
• Was overshadowed by God’s glory (Exodus 40:34),
• Contained the stones of the ten commandments, a pot of manna, and the first priest Aaron’s budded staff (Hebrews 9:4),
• Was sent to the hill country for three months when Uzzah was killed for unlawfully touching it (2Samuel 6:1-11),
• Was leapt before by King David when it came home (2Samuel 6:14),
• Was hidden and lost (2Maccabees 2:5-8) 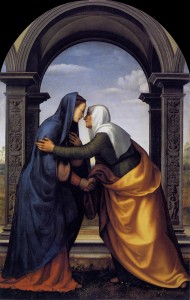 Athanasius and Gregory the Wonder-Worker (third century) sang and wrote of Mary as the ark ~ covered in gold within and without and holding the treasure of the sanctuary. I read a statement by protestant preacher R.C. Sproul, that “The presumptuous sin of Uzzah was this: he assumed his hands were less polluted than the dirt.” Well, no sir. His sin was disobeying God and touching the sacred vessel, a picture of Mary’s sacred virginity.

The final point above puts Mary in heaven, bringing us to the feast of her assumption, which we celebrate in a few days. Formally defined as dogma in 1950 as, “having completed the course of her earthly life, was assumed body and soul into heavenly glory,” we find writings about our blessed mother’s assumption from the honored sixth century author Gregory of Tours’ Eight Books of Miracles (and even centuries earlier in obscure texts). This story is not found in Scripture, but has clearly been believed and written about since before the New Testament was in place and it is certainly not an un-scriptural concept, as there are other “weird heaven-goings of holy people” like Enoch (Genesis 5:24) and Elijah (2Kings 2:11) being caught up to heaven body and soul.

“There (heaven) in the glory of the Most Holy and Undivided Trinity, in the communion of all the saints, the Church is awaited by the one she venerates as Mother of her Lord and as her own mother.

In the meantime the mother of Jesus, in the glory which she possesses in body and soul in heaven, is the image and beginning of the Church as it is to be perfected in the world to come. Likewise, she shines forth on earth, until the day of the Lord shall come, a sign of certain hope and comfort to the pilgrim people of God (CCC 972).”

Hail, kecharitomene (“were, and are, full of grace”)! We celebrate your assumption; you are with your Son now! We love Him, too, and look forward to the day we follow you to Him.