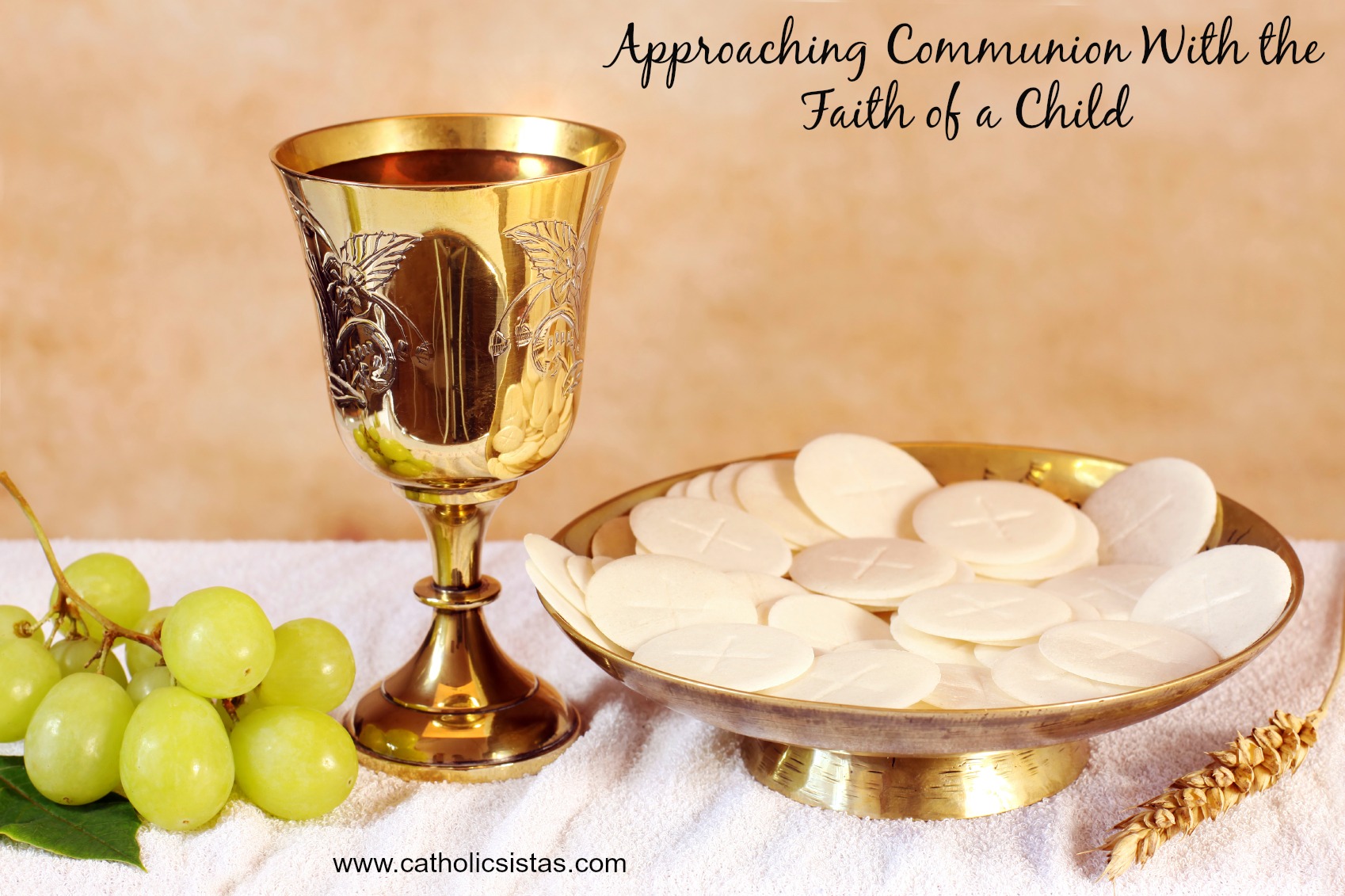 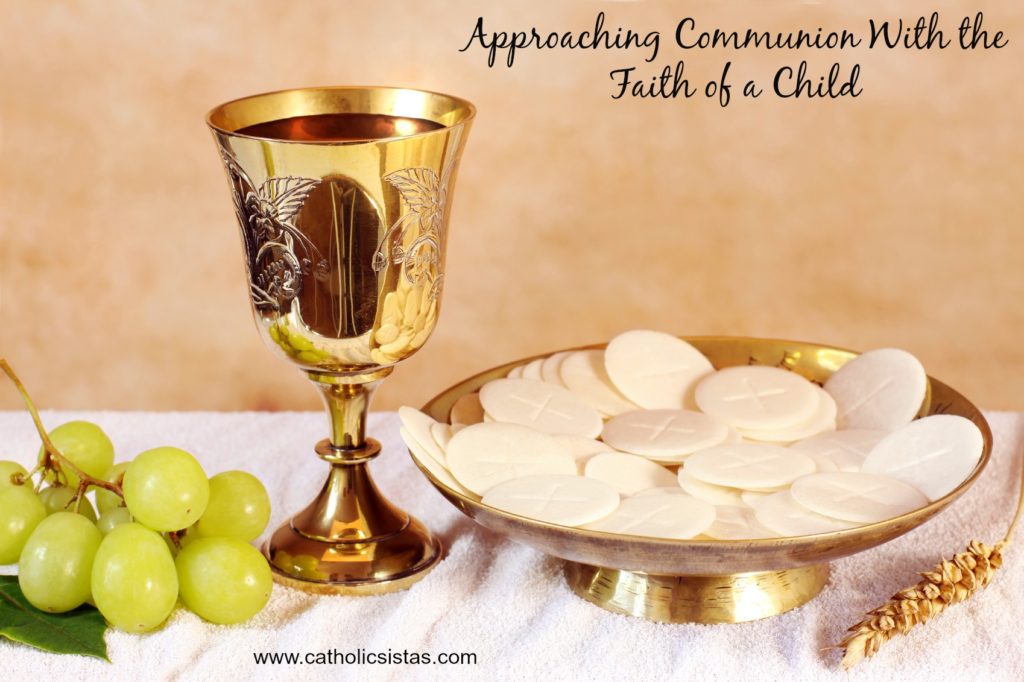 This past weekend, my oldest daughter, Rose, received her First Holy Communion. My husband and I were primarily responsible for preparing her for this incredibly special day. We did her lessons from the required First Communion book; we took her to Mass every week (as we always have); we took her to Confession often; we talked to her about what Communion is. We also tried to model respect and reverence for Jesus in the Blessed Sacrament. We got some compliments on her First Communion day about how reverent she was, and how well we prepared her. It would be easy for me to bask in the glow of these compliments and pat myself on the back– that is, if I weren’t so acutely aware of my own shortcomings in this area, and how much Rose has actually taught me through this process.

Seven years ago, I wrote a Facebook post about how Rose– then just barely more than one year old– was teaching me about seeing the dignity in all human life. (I published the note here a couple of years later). Just like she did so many years ago as a baby, Rose has shown me once again what Jesus meant when he talked about the importance of becoming “like little children.”

I have more book knowledge about Jesus and the Church than Rose does, and I intellectually know more about what postures and behaviors are most appropriate in Mass. I can communicate those things to Rose fairly easily. But I think she is the one who more fully recognizes and appreciates Jesus present in Host and Cup. Children are much more able to simply trust in Jesus without full understanding. Their innocence and imagination help them to have a confident assurance of Jesus’ presence in the Eucharist that eludes most adults. It’s real to them in a way that it might not be for many of us – even those of us who know and believe all that the Church teaches on the matter. They don’t just believe with their heads, but with their whole hearts and souls. 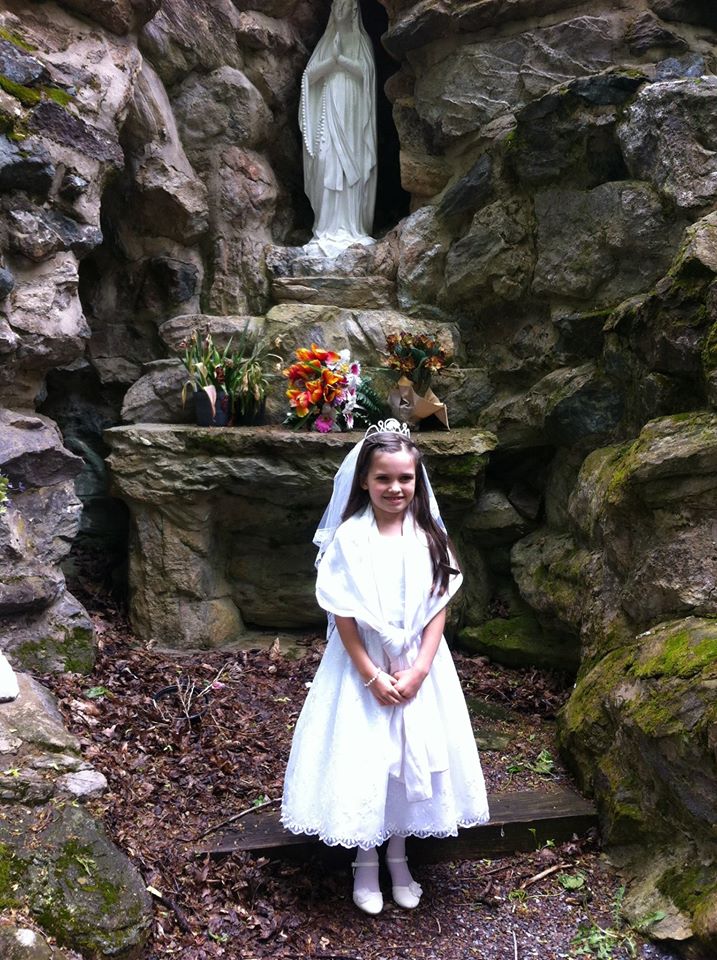 I can’t begin to describe the excitement that Rose had for months leading up to her First Communion, and especially on the day it took place. There was a time when I thought that maybe she was just looking forward to wearing a fancy white “princess” gown and getting a lot of attention; but in talking to her about Communion, I realized I was wrong about the source of her excitement. She really knew Jesus is present in the Eucharist and she really could not wait to receive Him. She came home from the First Communion practice the night before the ceremony with the biggest smile on her face, and it didn’t leave her face until well after Mass the next day. She was positively beaming. When was the last time I felt excited about receiving the Eucharist, and full of joy at the prospect of encountering the Lord there?

After she received for the first time, she told me that she was sad that Sunday Masses were an entire week away from each other because she wanted to receive Jesus more often (I reminded her that Mass happens every day, but it’s somewhat difficult for this pregnant mama to get her three little ones to weekday Mass alone). She received for the first time on a Saturday, so she did get to receive again the very next day– and she was more excited than ever to go to a regular Sunday Mass! How often do I long for Jesus in the Eucharist during the week, or make an extra effort to get to daily Mass to meet Him?

A few days before she received First Communion, she asked to go to Confession even though it had been less than a week since she had last been (she frequently has asked to go since her first time in November). She had been having an especially difficult time behaving herself in the days leading up to First Communion (I wondered if she were under a little spiritual attack), and she knew that you need a clean heart and soul to receive the Eucharist. We weren’t able to get her there since our access to weekday Confession is very limited, so I explained to her that her sins were not so serious that she couldn’t simply pray and ask for forgiveness and the grace to behave better. But, I was in awe of the fact that she understood how important it is to be well-prepared to receive the Lord. How often have I put off going to Confession for a long time and didn’t think twice about all the “little” sins that made my heart and soul less-than-pure for the Lord? I pray at each Mass, “Lord, I am not worthy to receive you,” but do I really think about the meaning of these words, and how I could prepare better so as to be a little more worthy next time? It’s so easy for adults to take reception of the Eucharist for granted, as if we are entitled to it under any circumstance.

Rose may have learned the proper words, actions, and doctrines from her father and me, but the proper interior disposition of joy and reverence can only come from the Holy Spirit. It’s acquired most easily by those with an innocent, child-like faith. I confess that despite my head knowledge and my going through all the correct motions, I frequently fall far short of the mark when it comes to that proper disposition of heart and soul. We adults can all too easily feel overly secure and superior in our faith because of our theological intelligence and our years of practice at doing things the right way. We can forget that, while important, these things do not equate to a close relationship with the Lord, or a strong faith. Rose inadvertently reminded me of that, and inspired me to try to do much better so that I can be more like her.

I’ve been thinking with sadness about all the children who made their First Confessions and received their First Communions this year with the same joy and sure-faith that Rose demonstrated, but whose parents will not bring them back to the Sacraments on a regular basis now that they have reached this milestone. First Confession and First Communion (like Baptism and Confirmation) are too often viewed by parents as boxes to check off because they are just what Catholics are supposed to do. Then, their children’s innocent longing for the grace and freedom of Confession and for the deeply personal relationship with Jesus through the Eucharist goes unfulfilled – and eventually fades away. It’s an incredible tragedy. I may not be responsible for the genesis of Rose’s pure love for Jesus in the Eucharist, but I am responsible for nourishing it. I pray that I will always take that grave responsibility seriously, and that, in the process, I can continue learn just as much (or more!) from Rose as she is learning from me.