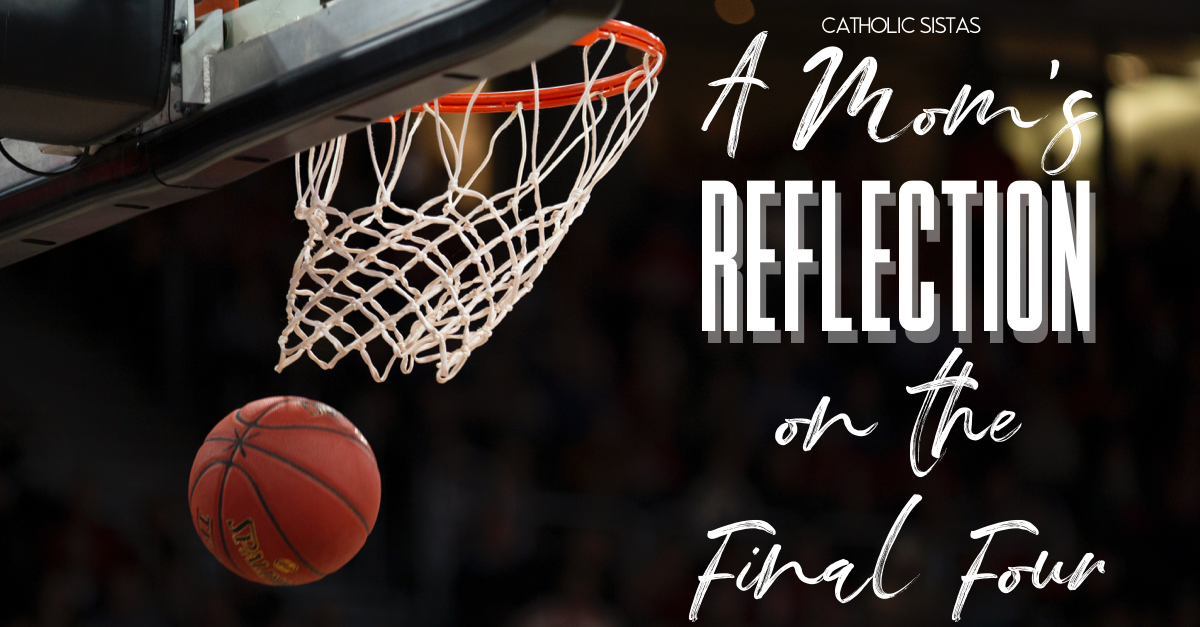 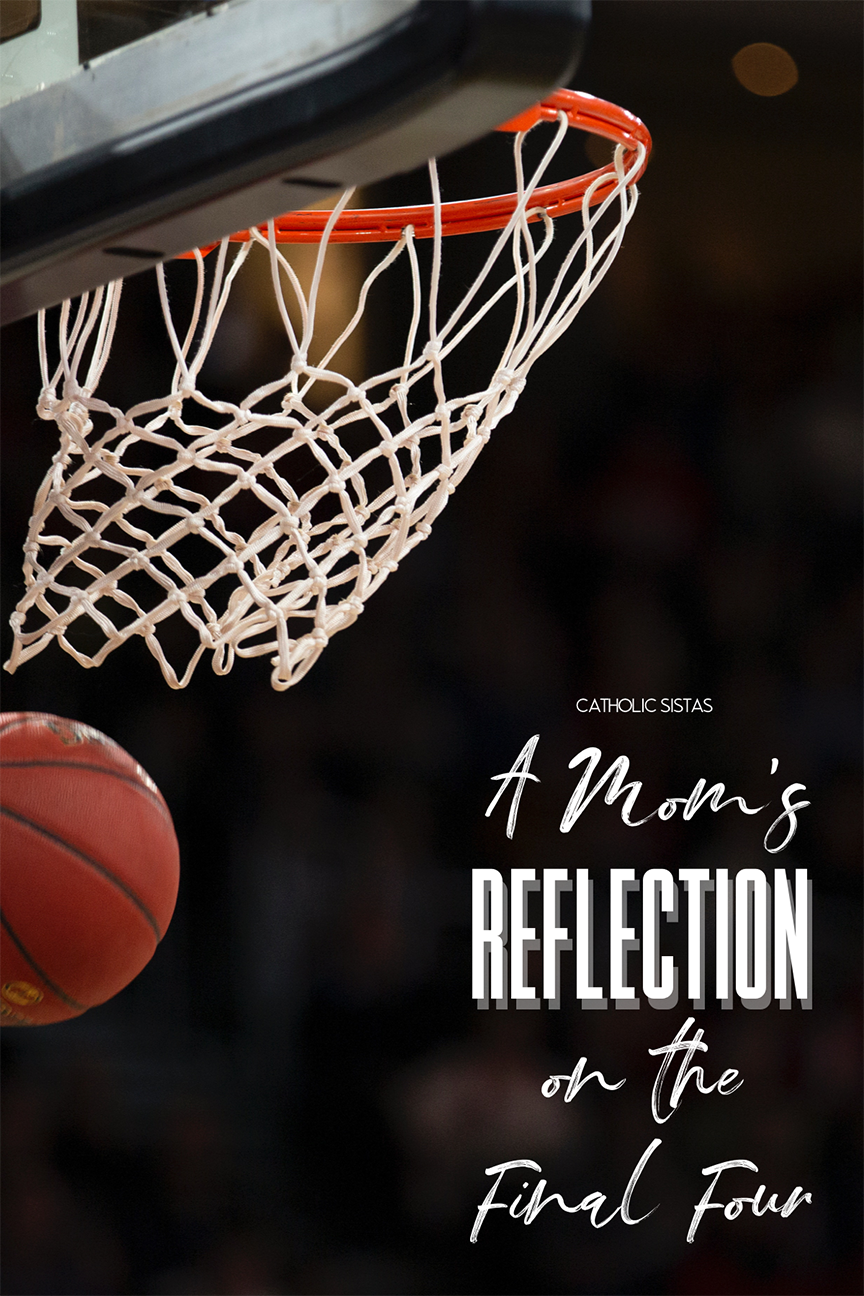 Oh, what a night it was. It began days before or was it a year or more?

In the Bible there are two words for time: chronos and kairos. The former is the quantitative sequential time that we are all accustomed to living in (or trapped in). But the story I want to tell is rooted in kairos, a time measured qualitatively, timelessly. It’s difficult to determine when the night began…

I didn’t grow up in a family that played or watched sports on TV. I married into the madness that is March. My marriage then gave birth to Friday Night Lights and Soccer Saturdays and Sundays…and Mondays, Tuesdays, and…Mother’s Days? Seriously?! I have learned to love sports because the people I love do.

So it was a big deal in our family when the University of Virginia made it to the Final Four this year. The last time it happened, my husband was a 3rd year student at UVA (it’s what the university calls its juniors). Fast-forward 35 chronos years and we now have two sons at UVA, one in his 4th year and another in his 1st . So naturally they texted us after the Elite Eight game and said they bought tickets to the Final Four. 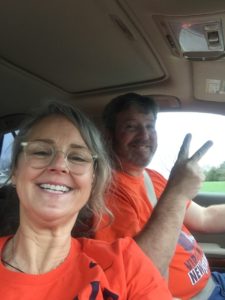 I cherish the texts I get from my college sons. They arrive at my empty nest like carrier pigeons from distant lands, as magical as a letter from Harry Potter’s Hedwig. And they are almost as fantastical. Take the one I read after coming out of Mass a few months ago: “Don’t worry, Mom, I’m going skydiving with friends. I’ll call you when we land.” I immediately went back into church and got down on my knees.

So last weekend’s text shouldn’t have surprised me.

“Whaaaaaaaat?!” I texted back, “The game is in MINNEAPOLIS?!” I then proceeded to rain questions on their parade: “How are you going to get there? Where are you going to stay? How are you going to pay for it? What about classes?” Once again I had “mommed it all up” with pesky details, while dad wondered aloud if his college ID could still get him a student ticket to the Final Four. 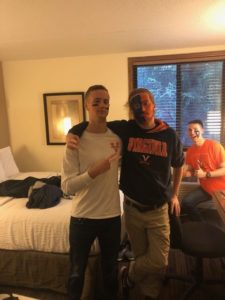 But it had already been decided. My sons were going to make the 20-hour drive–one way–to watch what could be a mere 3-hour game. Oh, to be young. I cursed myself for having taken them on that cross country camping trip in middle school…for convincing my husband to let them travel to Spain while in high school. You reap what you sow. Now our babies were taking trips of their own and I was beside myself with worry.

Fearing the worst, I woke every few through the night and tracked their progress across the Midwest on the stalker app we all share. (Don’t judge.) Before drifting back to sleep, I would I refresh the screen several times to make sure their car was moving and not stuck in a ditch somewhere.

A wonderful friend suggested I imagine Jesus and Mary riding in the car with them. By the time they got to the mountains of West Virginia in the wee hours of the morning  (not even halfway to their destination), their car was crowded with the additions of St. Catherine Laboure, St. Therese of Lisieux, and St. Michael. Praise God and thanks be to the angels and saints, my boys left UVA at 5pm on a Friday and arrived at their hotel in Minnesota by 1pm the next day.

If you didn’t watch the Final Four game it’s not too late. It is, after all, a kairos story. In all the years I’ve not-so-graciously watched basketball, football, and soccer, I haven’t learned much. My interest lies primarily in the people. And if you’re not familiar with UVA’s basketball team, let me tell you about it.

I’ll start with the coach–the strikingly handsome Tony Bennett will draw in the most disinterested sports’ widows. And he is the calmest coach you ever saw. No maniacal hopping up and down like a wild boar on the sidelines, sweating through his clothes and spitting and cussing like a sailor. No, Tony’s chiseled face is one of utter coolness. Michelangelo’s David. “Calm is contagious,” he likes to say.

Next I fell in love with Kihei Clark. If rosters are to be believed, he measures 5’9”, a modern day David among Goliaths. If you are the opposing team, he is like a gnat–all in your face and throwing you off your game. If he’s on your side, he’s more like Tinker Bell, sprinkling fairy dust on your dreams and desires. He doesn’t smile a lot and I can’t figure out how he is joy personified, but he is. Perhaps it’s because he is a joy to watch: number zero, coming in clutch against all odds. The young David everyone overlooked, a college freshman unheralded as a high school recruit. His plays are packed with personality and positivity. They are momentum-shifters that lift everyone watching out of their doubts it can be done.

If you like the brooding, serious type, there’s Ty Jerome: Masculine-filled fury on the court and in post-game interviews. And then there is that GUY. Kyle Guy, my new hero. I officially fell for him when he effortlessly dropped three free throws into the basket, nothing-but-net, in overtime with a half second left to win the Final Four game and usher his team into the National Championship for the first time in school history. (Not to mention that he gave my boys two more days to catch up sleep before making the 20-hour trek back to UVA. This mother thanks you, Kyle.) My older son watched courtside and said it looked like Kyle had ice running through his veins when he plunked in those baskets…while his opponent pantomimed the choke sign just feet behind him. I fell even harder for him when he admitted in interviews he was confident but terrified.

Then I read the heartbreaking letters he posted on Facebook a year ago, baring his soul after “the worst loss in the history of sports.” That’s how announcers and reporters refer to it EVERY time they’ve talked to or about UVA basketball players for the past year. As the only 1-seed in the history of basketball to lose to a 16-seed, the team’s devastating fall from grace occurred in front of millions of people.

The loss led to a mental breakdown for Kyle. Crippled by anxiety, crushed by public humiliation, and devastated by doubt, he literally collapsed sobbing on the hardwood floor at the end of that fateful first-round exit from the “big dance” last year. He was practically carried off the court by his teammates. It’s painful to read his brutally raw letters to himself, that he bravely shared with the world, detailing how that anxiety followed him back to campus, along with, if you can believe it, death threats.

One of the more refreshing questions I’ve heard a reporter ask recently was about what Coach Bennett did to help Kyle overcome his anxiety. “Kyle-Guy-then” and “Kyle-Guy-now” is a study in transformation and redemption. His three consecutive free throws in overtime this year didn’t simply win UVA a ticket into the historic championship game, they effectively knocked last year’s weight off his and his team’s back.

“What’s the secret to helping someone overcome that?” the reporter asked. Finally! A GREAT QUESTION! I don’t think anyone was prepared for coach’s answer.

“I pray for him,” Coach Bennett replied. Now this is some sports I can truly love.

If you didn’t catch the NCAA championship game, at least watch the highlight reel.  That’s my redheaded 4th year’s screaming face, painted blue and orange, filling the TV screen at the 17 seconds mark. Or you can wait for the movie because Hollywood couldn’t have scripted a better story with a more exhilarating ending. It’s a kairos tale that will thrill for decades.