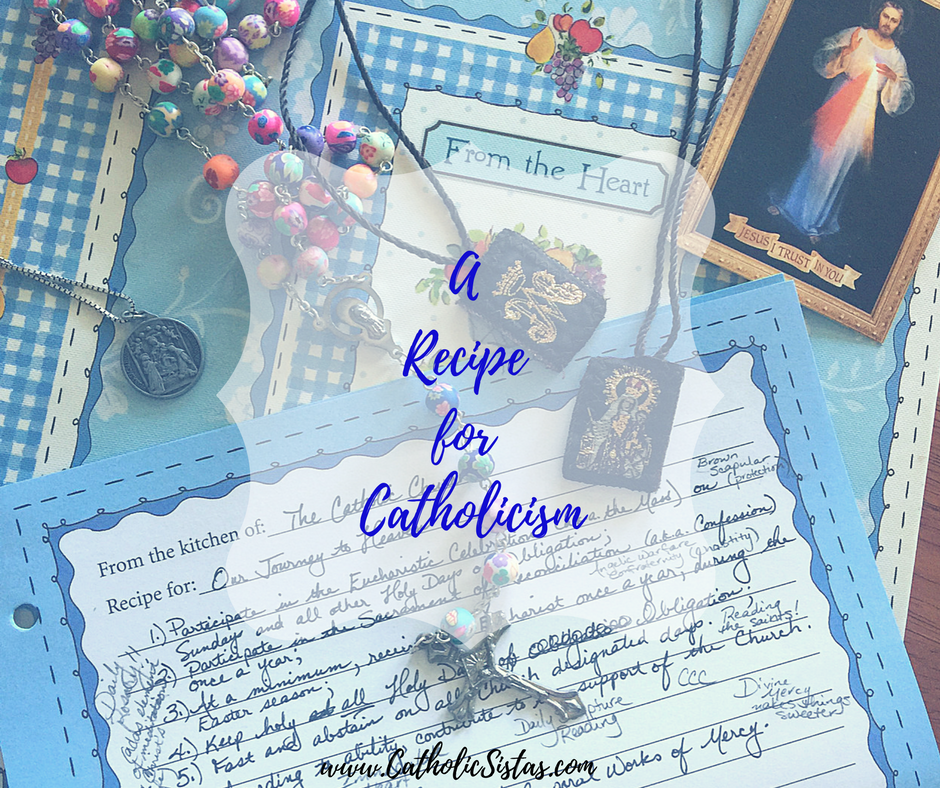 Being Christian is tough at times. Being Catholic? Even harder most times!

Sometimes, as Catholics, it can be difficult to explain our Faith, let alone convince others about our beliefs. As I have explained to my husband (who is Methodist), as a Catholic, there are more things I am called to pay attention to – not because I think we are better than anybody else, but rather, because I have firm belief that my Catholic Faith and Traditions will open my soul to be truly transformed by Christ!

To use a cooking analogy – I believe the Catholic Faith has the complete recipe, with generations of those who have gone before having filled in the recipe card with handwritten notes of love, encouragement, and tried-‘n-true tweaks.

When we look at the recipe of Catholicism, the (arguably) Six Precepts of the Catholic Church are outlined on the Vatican website, and are the pen on the recipe card:

1.) Participate in the Eucharistic Celebration (a.k.a. the Mass) on Sundays and all other Holy Days of Obligation;

2.) Participate in the Sacrament of Reconciliation (a.k.a. Confession) once a year;

3.) At a minimum, receive the Eucharist once a year, during the Easter season, making the second precept annual to ensure reception of Christ’s Body and Blood, Soul and Divinity is received under a state of grace;

4.) Keep holy ALL Holy Days of Obligation by attending Mass;

5.) Fast and abstain on all Church designated days;

6.) According to ability, contribute to the support of the Church. 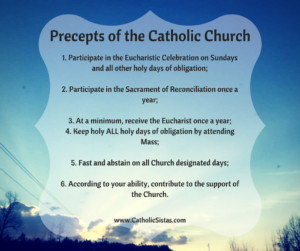 The other penned ingredients include the belief found in the words of the Apostles’ Creed, the Ten Commandments, and the Bible.

Further down on the recipe card are instructions, in which we find the Spiritual and Corporal Works of Mercy, the Theological and Cardinal Virtues, and the Fruits and Gifts of the Holy Spirit.

But, written in the margins?

The writing left from those who have come before us, and traveled the rocky, hilly terrain to God?

In the margins, tucked between the ingredients and steps of the recipe, we are given the devotions promoted by the Catholic Church!

Nowhere is the uniqueness of the Catholic Faith more acutely felt, than when one considers the vast devotions applicable to living and being transformed by one’s Catholic Faith.

Whether it is a special devotion to the Rosary, to the First Fridays or First Saturdays, Divine Mercy, or Brown Scapular, there is no right or wrong! Sometimes, devotions can begin to weigh you down, literally, as you add the Miraculous Medal to the one worn by the Angelic Warfare Confraternity, to the St. Christopher Medal, or medals for other special causes or saints.

Each of us have our own call to particular devotions – one person may feel drawn to the Immaculate Heart devotion, while another may feel drawn toward the Divine Mercy devotion. The beauty is that we don’t have to adhere to every special devotion, but we can learn from each other, and share those treasures – those notes in the margins – with each other!

The point of this is to not discount the handwriting in the margins.

Instead, keeping the ingredients written in pen, read the extra handwriting, take note of added ingredients, and tinker with your own recipe!

Devotions serve to enhance our transformation into followers of Christ. They are present to allow us into a deeper relationship with Him! 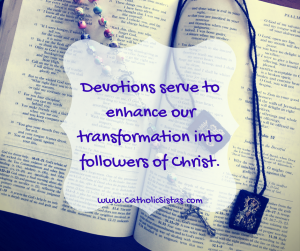 Through our Catholic Faith, we see a transformation in our lives as we seek, find, and get to know God. Through that transformation that occurs, we are challenged to be Christ’s hands and feet, bringing Him to others through our thoughts, our words, and our actions.

Devotions serve as a (mostly) daily reminder of the added benefit of knowing Christ, and being Christ-like to others. They serve as a way to recognize Christ in our neighbors, and become a representation for us, of the reward of knowing and keeping Christ close.

When was the last time you researched a new devotion?

When was the last time you considered adding a new devotion to your faith life?

Do you have a special devotion?

I’d love to hear your devotions in the comments below!