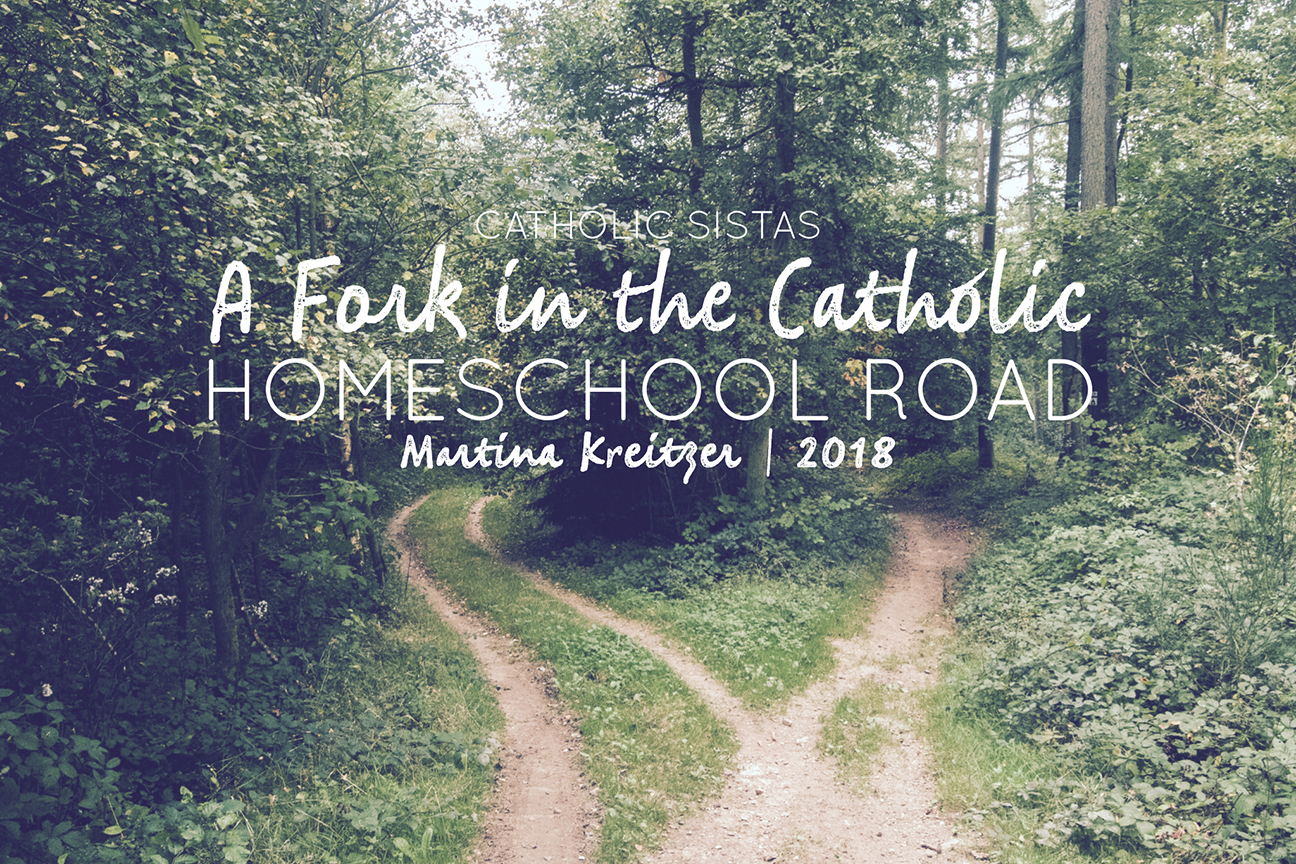 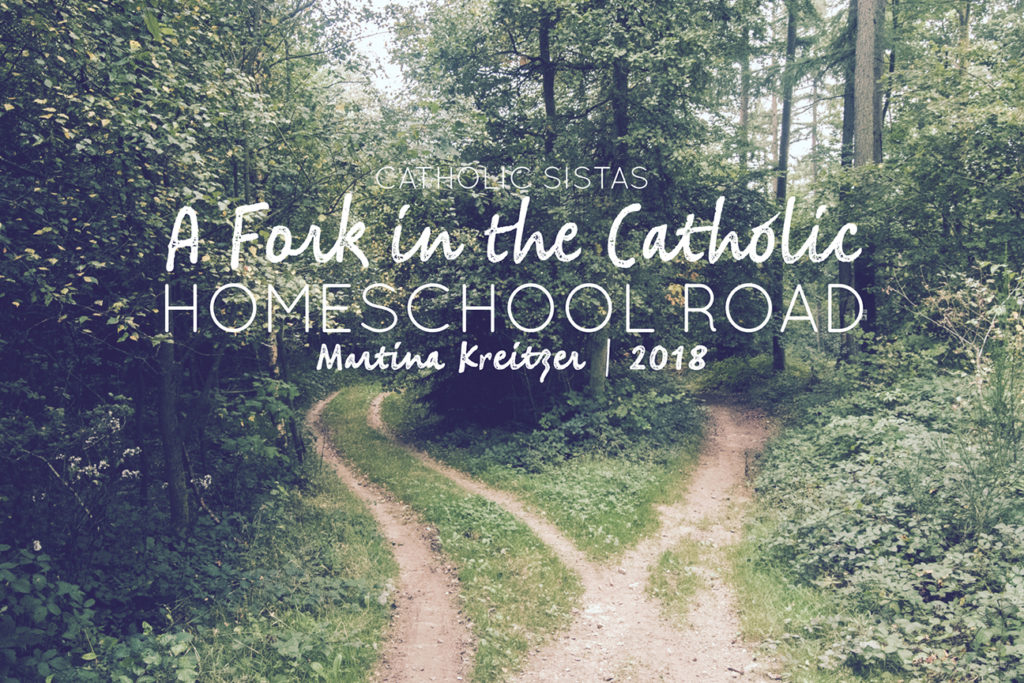 Discernment has always been an easy thing for me. I’ve never been one to jump headlong into life-altering decisions without considerable time spent in prayer, confession, and consulting my spouse, as well as my spiritual director. I am a true aries in that I live for lots of new ideas and changes and exciting projects – I love the thrill of a new idea and fleshing it out from idea to product or campaign or movement. I’m also an INFJ, practically a Sasquatch in terms of personality types! So, what this all amounts to is that I am slow to warm to an idea that will require a LOT from me – or my family. It needs to make sense in all applications, spiritual and practical. But when I’m in, I’m all in.

And that’s how it was when we discerned homeschooling. I took a full year to discern its place in our home, our life, and examine its impact on the children. I wrote about it here, here, and here. We are spoiled where we live in terms of education choices. There are plenty of Catholic school options, homeschool styles {stay at home, to co-ops, hybrid schools, etc.}, and even public schools around here come complete with the option to explore the various charter schools, even outside of our local school district.

So, imagine my surprise on the heels of seven years of homeschooling last year when I seemingly made a hasty decision to enroll my then 10th grader – well, rather I applied for him to get a seat at a local charter school.

This one school had become the hot topic among many many circles of Catholic friends. Friends whose kids were in public school; friends whose kids were in Catholic school; and, friends who were solidly entrenched in the Catholic homeschool community. It had been in the back of my mind as a possibility going back as far as the day when the doors of the school first opened and a friend was singing its praises.

In true INFJ skepticism, I reserved my judgment, but happy that a steady trickle of friends were starting to lean toward this school. It must have ultimately been a subconscious discernment. It had to have been.

I met with the friend whose kiddos have been enrolled since day one for a completely unrelated matter, and the conversation eventually rolled over to some academic challenges we were facing with our high schooler. We had reached a stalemate with my ability to get him to do his work and the result was a quickly deteriorating relationship.

The problem, as I saw it was, as his momma, I knew what his potential actually was. This was affirmed by many people at church who worked with him and trained him as an altar boy. He was the silent leader, the kid who was excited to attend the altar server retreats to help and to mentor and train incoming servers. He was the type of kid whose solid work ethic gave funeral directors a sigh of relief as soon as they saw him arrive to serve at a funeral Mass. Or a visiting priest who didn’t know his way around the sacristy – our son was there to assist and make the priest’s job as easy as possible. He was also the kid who willingly served eight funeral Masses in a span of just 10 days. Willingly served. Our parish is crazy big – the largest in the Austin diocese, and there he is up on the altar almost every Sunday, able to work without any thought to how many people were all looking in his direction. There was so much to proud of as his momma, and yet the schooling situation did not exemplify his best. He needed something else.

He needed a place to continue to strengthen those skills and I had to come to grips with the fact that we had come to the end of the road with homeschooling – him. I wasn’t sad about this realization, though. I was relieved to let it go.

We have homeschooled in the face of true adversity

I had decided from the beginning that I would not be a homeschool purist, or duro homeschooler. It was never about homeschooling because it was “the perfect way to educate my children” because I don’t believe there is one perfect way to educate my children. I realize not everyone feels this way, but I share this because I feel like it better paints the picture of the decision to transition out of homeschooling. I have always believed that homeschooling was the best decision for OUR FAMILY as long as it made sense. And that would require ongoing or rolling discernment each year. There was one time in our lives when it could have made sense to put all the kids in public school. And I might have. When your pro-homeschool in-laws suggest you strongly consider it given all the chaos in your life, you know you’ve got some straight up legit reasons to look elsewhere.

You know what stopped me? It was April. The idea of putting them in school for the last two months of the school year seemed like more of a disruption to the kids – and an unhealthy idea at that. It was a time when we really needed to go inward as a family and I needed to pour into my family. So, we plugged along with the basics (math, reading, spelling, English) and were able to pick up full steam again in the fall.

Homeschooling is one of those things that has been what I call a rolling discernment. Did it work this year? How effective was I as a teacher? How did each kiddo respond? And then we would continue forward. What looked like seven years of solid homeschooling was really piecemeal if you were behind the scenes. Can you relate? Does your homeschool also look seamless from the outside?

Why I drag my feet out on discernment

One of the reasons it takes me so long to discern, is because there is typically some element of processing the change. For me, I need time to process it on the front end as much as possible. I don’t like sudden change. I feel a loss of control in that I didn’t get to think things through. It ends up feeling like a rug is yanked out and super chaotic to me.

Somehow, this decision was prompted when the boy asked about going to the local high school.

Oh, and did I mention we had just had a baby AND we were in the middle of selling our house? And buying another?

I believe my response was something along the lines of ‘oh sure, just throw another log on the bonfire!’ I told him I’d research options and that the local high school {read: freakishly large high school that my cousin attended some undisclosed number of years ago} was likely not going to happen.

And that’s how it began. I found myself on my laptop registering my son for the charter school so many friends had sung its praises when that wild hair crept in:

“Go ahead and enroll the rest of the kids.”

And that was the extent of my active discernment, y’all. And it was just this one charter school that I considered.

Education for its own sake

Not technology based {can I get an Amen?!}

Small school {perfect for transitioning out of homeschooling}

Two weeks later, we found out our son was offered a seat to this school. This was one week before we moved. We met with the headmaster {see, how cool is that title!} prior to his acceptance after we moved and it was done. He started school less than a month later.

SHEW. No other immediate decisions needed to be made with the other kiddos! I was able to continue to process this eventual change to our family.

Then my sweet Mary Jo was accepted to start the last quarter of this school year. I was pregnant with her when we started homeschooling and her big brother – now at the charter school – who was the catalyst for homeschooling. They would be together at the school. While I was weepy about the sudden change, I was happy for her to have this opportunity.

I cried anyway. I had to. I’m Mom and Mexican American – it’s pretty much my thing to be a hot mess of emotions. ?

We had already opted for public school for our youngest son as a means of being able to continue homeschooling the others, so we already had feet in different schooling options. The beauty of homeschooling is you learn to recognize what education style works best for each kiddo. Our kindergartener has also been accepted to the charter school for the fall as well.

This is my life right now.

ENCOURAGEMENT – I NEED IT, YOU NEED IT

I want to offer encouragement to any other parents out there who may be considering other options. We tend to fall for ideas that tell us we are “less than” if we don’t do x, y, or z as Catholics. And that can be the case when it comes to homeschooling.

But let me tell you this – there is a season for everything. Go to confession to create a clear pathway for discernment and take it to prayer. If you have one, speak with your confessor or spiritual director about it. And then rest in the confidence that if God has provided the path for you, that He will give you the strength to see it through.

Our season for homeschooling will have lasted for eight years by the time it’s all said and done,

and I have peace about the decision to move the kids to this one school.

Has there ever been a time when you were discerning a major change for your family and felt a clear tug from the Holy Spirit to change directions?