The month of October is designated by the pro-life community as Respect Life month. This is a time for us as Catholics and pro-life people to focus our efforts on promoting respect for all persons at all stages of life—from conception until death— and spreading the message that all human life has intrinsic dignity (after all, we are the only creatures that God made in His image).

Traditionally the primary focus of the month is on promoting respect for life in the womb. There are a few reasons that the issue of abortion seems to take priority above other facets of the Respect Life theme. First, it has to do with sheer numbers. Over one million innocent lives are lost through abortion every single year in the United States alone. Since Roe v. Wade in 1973, when abortion was enshrined in national law and States were forbidden to ban it, there have been over 50,000,000 abortions. That number is staggering when you think about it.

Second, respect for life begins with life in the womb. The baby in the womb is the most defenseless of human beings, and the womb should be the safest place on Earth. If we as a culture cannot respect life in the womb, then there is no reason that we should be expected to respect any other life at any stage in development. The arguments that are put forward in defense of abortion have scary implications for the rest of society when they are carried to their logical conclusions. For example, if abortion is okay because some babies are “unwanted,” or will be too difficult to care for, then what about children whose mothers decide after birth that they don’t want them or can’t care for them? What about the the elderly who are unloved and unable to care for themselves? If abortion is okay because ‘fetuses’ don’t have sophisticated mental capacity, then what about already-born people who are brain-damaged or severely developmentally handicapped? If abortion is okay because some unborn babies have diseases or deformities that may doom them to a very short life or a life filled with suffering, then what about people who develop a debilitating or terminal disease or physical handicap after birth? If we can take some human lives–the most innocent among us–why not others? (In answer to this question, pro-choice people will start throwing out words like “personhood” and “sentience,” which are arbitrary and subjective standards… but that is a post for another day).

Yes, respect for life begins with respect for life in the womb. But, we also cannot ignore the other ways in which our culture offends against human dignity and promotes an agenda of death over life. This includes embryonic stem cell research, euthanasia, assisted suicide, the unjust use of the death penalty, and the disrespect for the ill and elderly (many of which have become much more accepted by society as abortion has become more accepted). 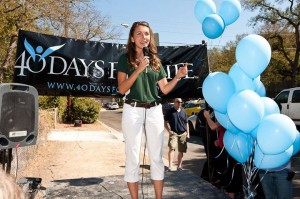 Elizabeth McClung, Executive Director of Austin Coalition for Life, at the 40 Days for Life kickoff in Austin, TX. Photo by Arlen Nydam.

Over the course of this month, the Catholic Sistas will be doing our part to promote respect for human life by blogging about abortion and other topics encompassed by the Respect Life theme.  Many of us will also be participating in local Respect Life month activities and engaging in personal prayer and fasting for an end to abortion and other offenses against human dignity. Some of us also will be participating in the national 40 Days for Life campaign that began on September 28 and goes until November 6. We encourage our readers to find some way to participate in the efforts of Respect Life month/40 Days for Life as well (as October is also the month of the Holy Rosary, you might consider taking up praying a daily Rosary if you do not already do so).

Amidst all of this Respect Life activity, there is something else going on during the month of October, which is especially important to some of the members of our blogging team. It’s also National Breast Cancer Awareness month. It’s fitting that two issues that affect women, especially, so very deeply are converging in this one month, and the goals of these two campaigns should fit together nicely. We Catholics and pro-lifers want to support and promote the dignity of those who are dealing with cancer and whose lives may no longer meet our society’s utilitarian standards of who is worthy of respect and who is not – who has dignity and who does not. It is the very ill who are the target of our culture of death’s misguided “compassion” that says that a life of suffering is not worth living. And it is women who suffer from cancer while pregnant who are told that they must choose between their own lives and those of their unborn children (and very often are pressured to abort their children).

There should be no conflict or competition between those wearing pink ribbons and those wearing precious feet pins. Yet, the most well-known and highly visible charity related to Breast Cancer Awareness, Susan G. Komen for the Cure (SGK), contributes YOUR donor dollars to the nation’s largest abortion provider and a major dispenser of hormonal birth control (which can act as an abortifacient*) – Planned Parenthood. This is wrong from both the standpoint of respecting the unborn life routinely destroyed by Planned Parenthood through abortion and hormonal contraception, as well as the standpoint of respecting the lives of the women who are (or may be in the future) victims of breast cancer. Women deserve to know that the pregnancies they are trying to prevent or destroy could protect them against breast cancer, and that there is a possibility that their use of hormonal contraceptives or their procurement of abortions may directly increase their risk.

So, as controversial as this may sound, we as pro-lifers should not support SGK. Unfortunately there is also a long list of other charitable organizations that we should not support because of where that money would be going, including the American Cancer Society and the National Cancer Institute. Some of them are also “in bed with” Planned Parenthood, but in many cases, the reason we should not support them is because they support or directly fund embryonic stem cell research as part of their effort to discover treatments and cures for various maladies . Apparently, they think that it is okay to disrespect and destroy some lives in the pursuit of caring for other lives. 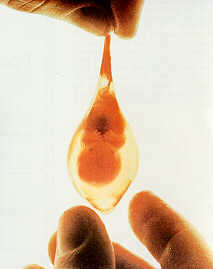 Most of society seems to be on board with that concept these days. They think it’s okay to sacrifice embryos in pursuit of medical advancement. Or they think it’s okay to allow a fraction of our charitable donations given to cancer organizations to go toward supporting Planned Parenthood because of the good that may be done by the rest of the donation. But we as Catholics know that these are human lives that we are talking about, and that we do not and cannot value one innocent human life above another. This is what sets us apart from our secular society. We understand that we can never choose evil no matter what good may come from it.

Taking a stand on this principle can put us in an awkward position. I’m sure most of us have been in the situation of being asked to support SGK or other questionable organizations through donations or participating in walks. If we refuse to do so, it can make us appear as if all our talk about respecting life only applies to the unborn and that we don’t really care about anyone else, especially not women with breast cancer (it doesn’t help that Catholics are routinely accused of not caring about women in general). We can appear callous and ideologically-driven rather than compassionate.

The truth is, however, that we don’t have to choose between being compassionate and adhering to our beliefs. We as Catholics can, and do, respect both the lives of the unborn and the lives of women (and men) with cancer (and it is hard to believe that SGK or Planned Parenthood respect either).

If we are going to take a stand on this issue and refuse to compromise on our support for any vulnerable persons, it is a good idea to arm ourselves with information, and be aware of alternative charities that we can support – there are some out there that don’t force us to choose between the unborn and the born. I have a hunch that this topic will be covered more extensively by other Sistas during the month of October, but here are just a few bullet points to help you to educate and defend yourself on this topic: 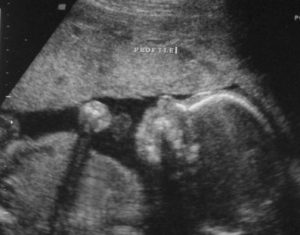 My oldest daughter at 20 weeks gestation.

I’ll leave you with a quote from Blessed John Paul II (taken from a farewell address given in Detroit’s airport, at the end of his 1987 pilgrimage to the United States):

America, you are beautiful and blessed in so many ways […] But your best beauty and your richest blessing is found in the human person: in each man, woman and child, in every immigrant, in every native-born son and daughter […] The ultimate test of your greatness is the way you treat every human being, but especially the weakest and most defenseless ones. The best traditions of your land presume respect for those who cannot defend themselves. It you want equal justice for all, and true freedom and lasting peace, then, America, defend life! All the great causes that are yours today will have meaning only to the extent that you guarantee the right to life and protect the human person.

It is our solemn duty to defend life. All life. Life in the womb; life created in a petri dish by overzealous scientists; life that is laden with suffering; life that is nearing its end.

And we can’t let anyone persuade us away from this mission by trying to force us to pit one life against another. We can’t let anyone guilt us into believing that we can’t take a stand for the unborn without taking a stand against women with cancer. There need not be any dilemma here. When we foster respect for life in general, we foster respect for all lives in particular.

*Hormonal birth control works primarily to prevent fertilization; however, the “backup mechanism” is the thinning of the uterine lining to prevent implantation of an already-fertilized egg (ie a tiny human being).

** The Sistas will be providing in future posts information about “safe” charitable organizations, especially those related to Breast Cancer. In the meantime, if you are looking for a good organization to donate to, there is a new charity called Journey 4 a Cure that raises funds for Pediatric Cancer research (which does not get a lot of attention or money). It was founded by a family that I am acquainted with, and I personally confirmed with this charity that they did not support or fund embryonic stem cell research. 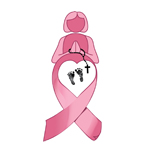 « The winner of our very first giveaway is…drumroll please!Tell me lies, tell me sweet little lies… »