10 Things You Should Never Say to a Catholic Mom

Welcome! Are you reading this because a dear Catholic friend shared it with you? Perhaps you are someone who has been on the receiving end of comments and questions that gave you pause…and you didn’t know how to respond. If either is the case, then this is the post for you! When we found out we were expecting #6, I wrote a post about all the different anticipated responses I was sure to hear from people. 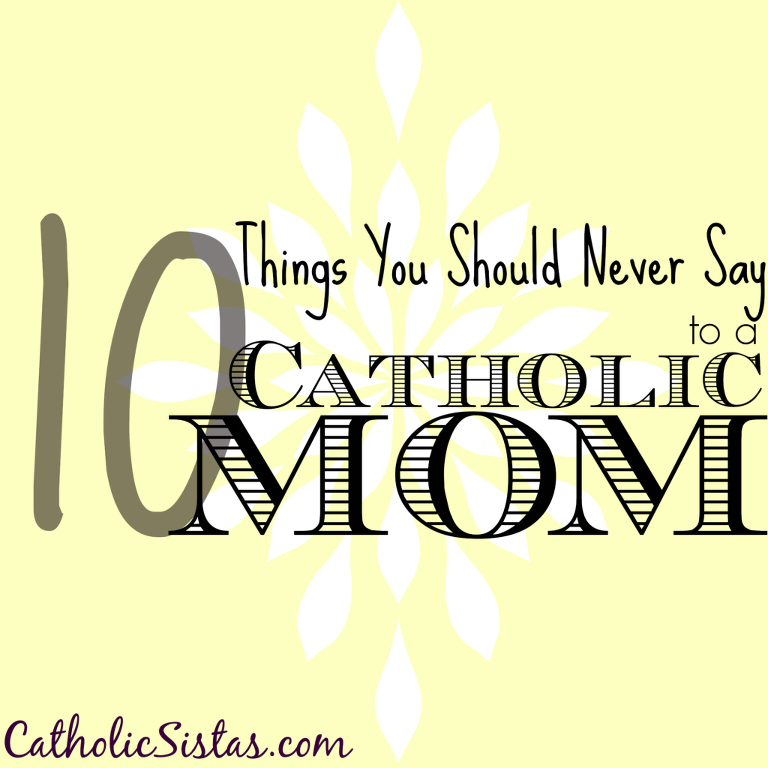 Oftentimes, we find ourselves in social situations in which people tend to fill the air with small talk, chitter chatter, etc. I’m not especially good with small talk given that I am an introvert and have fallen into some awkward conversations because I struggled to keep the conversation going. So, if you have found yourself in the same situation, take heart. Maybe you meant well and didn’t realize the comment or question could be construed any differently than you intended. That’s ok! The aim of this post is to shed some light on why certain questions and or comments can come off as intrusive, rude, or unfeeling. And let’s say you aren’t that kind of person. I tend to err on the side of giving others the benefit of the doubt.

After talking to some Catholic mom friends, they were gracious enough to help me compile a condensed list of comments and questions we often hear and are faced with, many times asked in the company of our kidlet brood, which makes the situation all the more awkward for us.

Are you done yet? Asking someone if they are done having children is like inviting yourself into someone’s bedroom. Here, let’s finish this conversation in the hallway. *** More awkward is that this question comes from complete strangers. Not that it’s any less strange or embarrassing when an acquaintance, friend or even family member who actually knows you asks! When you ask someone this question, please consider that it is impolite to essentially ask someone about their sex life.

So, what kind of birth control are you going to be using after this baby? Again, in the same spirit of are you done, you have just invited yourself into a stranger/acquaintance/friend/family member’s bedroom. AWKWARD! Ask yourself the motive behind asking this question and refrain from asking.

You do know that NFP* doesn’t work, right? Apart from the secular notion that NFP “doesn’t work,” the bigger underlying issue here is that Catholics have some kind of crazy hangup about being ok with having…children. Crazier still, it is part of the vows we take when we are married in the Church. So, we are crazy from the moment we get married. 😉

*Read more from our collection of NFP articles and posts.

I don’t understand why you let the pope in your bedroom! Wait! You saw him in my house??!! Ok, seriously. This is offensive because the implication is that we allow a man to dictate actions that go on in our bedroom. Nothing could be further from the truth. We follow what the Church teaches, which in turn is upheld by a succession of popes. We aren’t being oppressed or made to be barefoot and pregnant at all times. We have freely given ourselves to following Christ and His Church, while prayerfully discerning what His will is for our family. 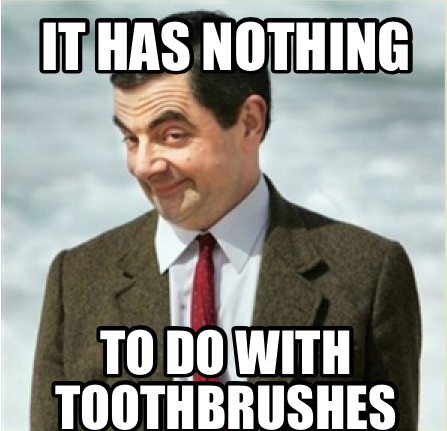 You know what causes that, right? ::wink wink nudge nudge:: People think it’s cute and funny to ask you if you know what causes babies. As if my six beautiful children and super cute husband didn’t give it away. I often joke {to the rolling of my husband’s eyes who thinks I’ve gotten all the mileage I possibly can out of it} that we figured it out and that our toothbrushes are now safely on opposite sides of the sink, thankyouverymuch. Ok, seriously, though. It’s not cute. Yes, we’ve figured it out.

Now that you’ve got your girl/boy, is your husband getting…ya know…snip snip…”the big V”? I really hope this one is self-explanatory, but let’s just take a stab at it just in case it isn’t. First off, there is nothing wrong with our God-given fertility. In fact, there are so many who suffer from infertility and would love to have children, so instead of looking at ourselves as something in need of being fixed when there is nothing broken, let us start to look at ourselves as the beautiful beings who are made in His image.

You have all girls. Are you going for your boy? While this may seem like a legitimately curious question, the underlying implication comes across as though the children someone does have are somehow inadequate or lacking. Whether a family has all girls, all boys, or one of each, all children should be loved and welcomed as the blessing they are, not because they are filling up our expectation of what a “perfect family” looks like. 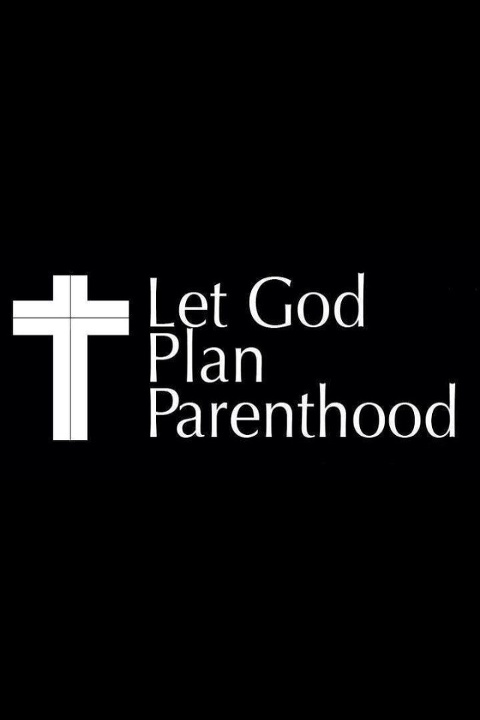 Were they all planned? Strictly speaking in terms of marketing, Planned Parenthood has certainly done their job in convincing the secular world that all things worth having are things that are properly and deliberately planned. Have you ever received a surprise gift from a friend, co-worker, or your spouse? How did you feel when your husband showed up with a surprise bouquet of flowers? Did you stomp on it and toss it in the trash? Would you reject the blessing of a child conceived who wasn’t planned? Guess what. Catholics love surprises, so even while it might blow someone’s mind that an unplanned child could be considered good, we can always confidently answer this question with a confident no because we know Who is ultimately in control of our family planning.

You know, you don’t really need to believe everything the Church teaches, right? That’s absolutely true!…only if you aren’t really concerned with taking your God-given responsibility as a Catholic seriously. In matters of Dogma and Doctrine, Catholics are absolutely bound to uphold Her Teachings above and beyond personal opinions and struggles. So, when you ask whether we need to believe everything {and only talking about Dogma and Doctrine, here}, you are asking whether we need to believe in and subscribe to the very definition of being Catholic. The answer should always be a resounding yes from any Catholic convicted in the Faith!

You know, you shouldn’t force your kids to be Catholic. Let them explore all religions and make their own choice. I have a great analogy to address the faulty logic in this comment. I’ve heard and seen people make this comment all too frequently. The idea behind it is that we want our children to be well-balanced and open-minded about the world around them. How can they possibly achieve that if we are busy bogging down their brains and hearts with all this Catholic stuff? Well, two things come to mind. The first is you wouldn’t put a sapling out in the yard during the dead of winter and expect that it can survive without your intervention on some level. The second is my analogy. I want to build a house, but I don’t want to build it on any old foundation, so I use sand in one section, concrete in another, gravel in another, dirt, wood, etc. By not choosing one sturdy foundation, I have effectively compromised the foundation that the house will be built upon. And so it goes with forming our children. When we make the decision to be Catholic, it is with the knowledge and conviction of going all in. I want them to have a healthy understanding, rooted in God’s love of what the Catholic Faith teaches, right down to the warts of our history. They need to know the human and divine Church. When they leave the house, they will have 18 years of being fortified in the Faith that God gave us. They will have the tools in their arsenal to weather those who will hate them simply because of our beliefs. Lastly, it will be good in helping them discern the difference between what they were raised with and other religions and belief systems. If as parents, we don’t give them something, we are choosing to give them nothing. I would rather be guilty of giving them something than shifting sands to build their morals upon.

So, there you have it! The key to having meaningful conversations is attuning ourselves and being more introspective when it comes to others. The next time you feel a {possibly unappreciated} comment coming on when you see a mom with her children out and about, consider these alternatives instead: 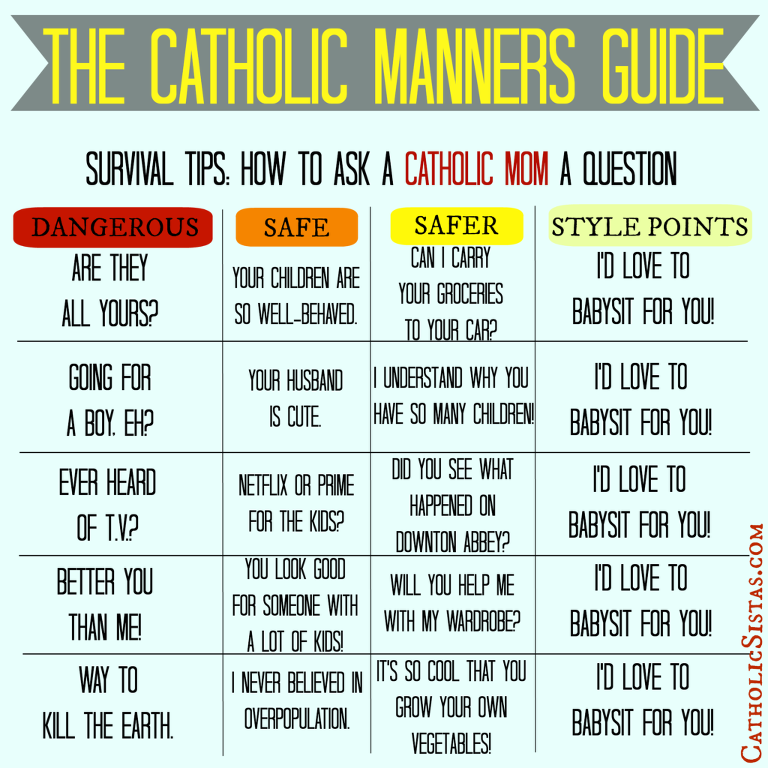