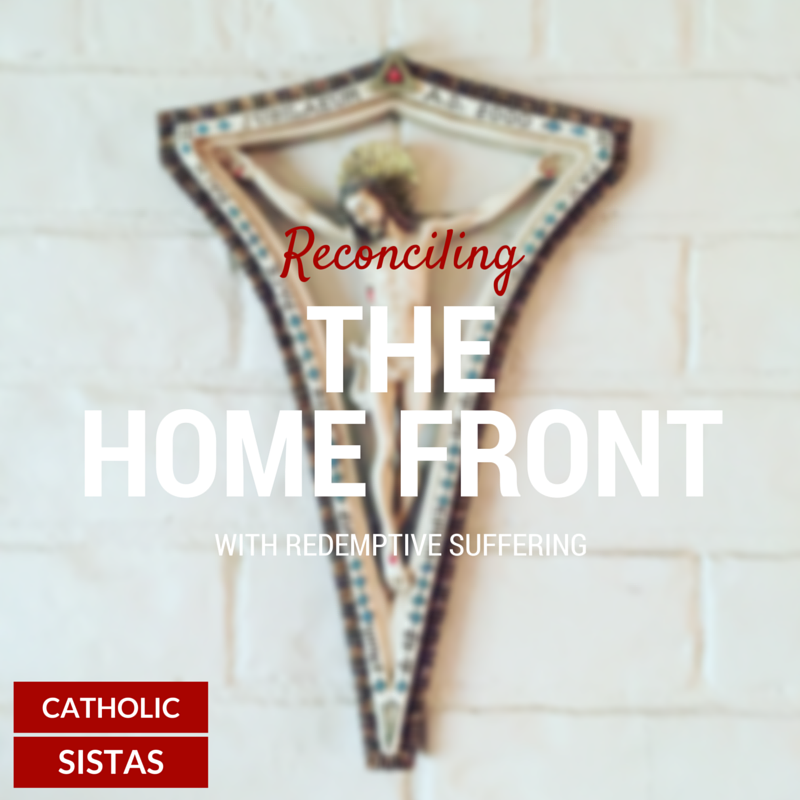 Years ago, I got this twisted idea in my head that being home (with the kids) was akin to not being a contributing member of society. Hard to know where I would have picked that up, right? I grew up the eldest in a two-parent double income household, and while there was really no pressure spoken of in the home to do the same, the example made a definite impression on me.

So, when faced with the financial numbers of my teacher’s income at the end of one school year {with one kiddo in first grade and the other in the toddler room at the school where I taught} I noticed that after gas, tuition, lunches, and a few creature comforts such as oh, I dunno, appropriate clothing for my teaching gig, the money and time just wasn’t there. The tradeoff, the expense was too high. While the timing would never be perfect {had we planned long enough, set enough aside, etc.?}, it was a plunge we had to take.

And still, that nagging feeling of you’re not contributing to society kept ringing in my ear like a nasty little bug.

You have a college degree.

You should be using it.

You wasted all that money on a degree you aren’t using.

I would shoo that bug away, trying to fill it with pursuits I thought noble enough to pursue while staying at home, putting myself into a class {or so I thought} that helped quell that feeling of not contributing.

I would begin my own wedding photography business in Northern Virginia – just outside of DC – but my heart wasn’t in it. I’ve always loved photography – I got my first Pentax K1000 when I was just 15 – but starting the business made me soon realize that I loved it for the art and not the work side of things.

Back to the drawing board.

Back to being just a stay-at-home-mom.

Society had really gotten to me. That cursed message told me I was worthless if I was at home. So, I continued to search for things that would fill me in a way that I could stay at home and still be able to provide on some meager level.

Then, one day I started to pray that God would silence that nagging feeling of being at home. I had tried various things with no real success or – worse – fulfillment, so I turned to God. My prayer was simple – I don’t like being at home, help me be at peace with it. I didn’t even ask Him to help me like it. I just wanted to be at peace with it. To settle that feeling of not contributing.

And my word, did God provide a whole new sense of clarity about things! It took many years of this simple prayer to pull the scales back from my eyes.

I realized it was my perspective that was leading to my own demise. I didn’t really think I wasn’t contributing to society. My society was represented within the walls of my own home.

Why didn’t I think of this before? From this epiphany, emerged a sense of confidence in the role that God had shown me. I was always a child of God, beloved in His eyes, first, and then wife and mother after, but it was my lack of understanding of the last two that led to being trapped in my own flawed thinking.

Of course being at home has value – take THAT stupid society and your stupid impossible standards!

Now came the hard work. Parenting kids all day long is hard, and exhausting, and mentally draining. At the end of the day, all I wanted to do was pour a stiff drink or eat a pound of chocolate…so, my prayer shifted. I went from needing peace to having peace to…desiring to like where I was. There’s a difference between existing in your vocation and thriving. I wanted to thrive. My family needed me to thrive. What I needed was spiritual Miracle Gro! 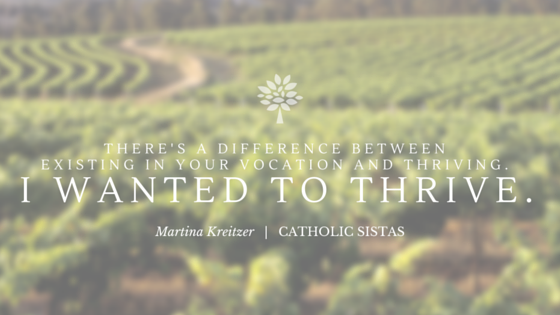 And so began a second phase of prayer and discernment:

Why was I home, truly?

What was the goal?

What were my own personal goals?

Was I meeting them?

If this were a traditional work out of the home job, how would I be evaluated – honestly?

If my husband is my companion in my vocation, how was his input and support affecting my work?

This second phase would involve a difficult look inward – until I heard Noe Rocha, our parish Adult Faith Formation director share in one of his talks during our Jesus Is Lord program:

Therefore, whether you eat or drink, or whatsoever else you do, do all to the glory of God. 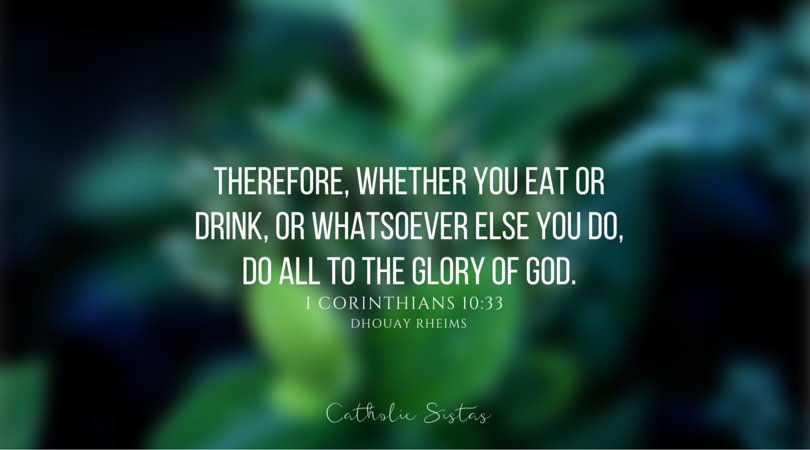 I realized that if I were to find any peace, any sense of calm in my heart, I was going to have to shrug off whatever had been weighing me down – my own personal stumblings.

So, I set to work on just changing my own attitude. Chores around the house, once the bane of my existence, I now looked at as opportunities to glorify God. I’m going to bloom where I’m planted, I decided. My husband and I were gifted this beautiful crucifix years ago that hangs over our fireplace. I knew that even though I wasn’t wild about chores – especially the kitchen which I found to be the absolute least gratifying room to clean – I could find solace in uniting my small suffering to Christ on the Cross. Not as a way to hush myself up, but to give my daily work meaning in a way that I hadn’t done before. Redemptive suffering gave me an opportunity to see my own suffering in a new light, almost like food that shouldn’t be wasted.

Don’t waste suffering! Someone else can use that, Miss!

While the struggle is always going to be real, it’s become much easier to deal with the daily doings when they have a purpose that is bigger than myself.

How have you embraced your vocation?

« The Blood of the MartyrsMarch: Dedication to Saint Joseph »