In our first two articles, we looked at why people become atheists and some common mistakes believers make when trying to evangelize them. Now we’ll look at some strategies that can be helpful in reaching an atheist’s heart and making them more open to the gift of faith.

Remember: you don’t evangelize atheists (or anyone, for that matter) to give them faith. Only God can give the free gift of faith. Our goal is simply to remove the misunderstandings, emotions, and pride that puts up barriers to the person accepting the gift of faith. With that in mind, these are the five most effective strategies I’ve found for planting seeds of doubt in the atheist’s heart.

And if they don’t make cracks in your atheistic loved one’s armor, don’t despair. After all, he’ll only be an atheist until he dies!

Strategy #1: Dispel the myth that faith is the enemy of science. 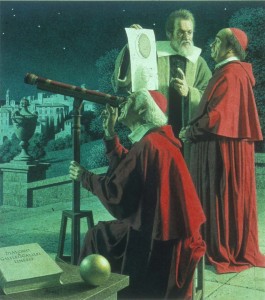 Actually, no, the Church did NOT kill Galileo for being a free thinker.

Secular media has all but declared faith and science to be mutually exclusive. No doubt most of this impression came from fundamentalist Christians’ total rejection of the theory of evolution. According to fundamentalists, the creation accounts must be taken literally: God created the world in six 24-hour periods.

Catholicism, however, concedes that the theory of evolution may have merit. Pope Pius XII declared that the Church “does not forbid…the doctrine of evolution, in as far as it enquires into the origin of the human body as coming from pre-existent and living matter.” Catholics aren’t required to believe in a literal interpretation of the creation story; we can see them as at least partly allegorical.

Could God have used the process of evolution when creating the universe? Yes. After all, Psalm 90:4 tells us that one day to us is like a thousand years to God. But while God may have had creation evolve over time, He still purposefully and actively guided that process. Human beings, too, though our bodies may have evolved, were still gifted with a specially created soul at one point that did not evolve. We can believe in evolution as long as we concede that 1) God was still the author of the evolutionary process and 2) God set humans apart from the rest of creation when He gave us a soul.

John Paul II wrote, “Faith and reason are like two wings on which the human spirit rises to the contemplation of truth.” Read up on some of the ways throughout history the Church has supported scientific inquiry (including the much-misunderstood conflict between Galileo and the Church). Be ready to claim some of history’s most brilliant scientific and philosophical minds as faithful Catholics: Rene Descartes, Nicolas Copernicus, Louis Pasteur, and Georgius Agricola (the father of “mineralogy”), to name just a few. Providing evidence that the Church is, in fact, the world’s greatest champion of science will disabuse most atheists’ of the idea that you can’t be both faithful and rational.

Strategy #2: Use secular terminology when possible.

Many atheists have a strong, negative emotional reaction to the concepts of faith, religion, and God. Take the emotion out of your exchanges with them by using secular terms to discuss the origins of life. Call the beginning of the universe the Big Bang (because surely it was!). If you believe human beings evolved, say so. Call God an “intelligent designer” instead of “Our Lord and Savior” or even “God.”

St. Paul says, “To the weak I became weak, that I might win the weak; I have become all things to all men, so that by all means I may save some” (1 Corinthians 9:22). Don’t let scrupulosity keep you from meeting the atheist where he is.

Strategy #3: Bring everything back to the First Cause.

Once you concede there could be some truth to the theory of evolution, it’s time to knock this crutch out of from under the atheist. Let’s say evolution is true and man did evolve from a monkey/fish/single-celled creature who crawled out of the primordial ooze. Where did the ooze come from? And what about that Big Bang? Is it really more plausible to believe all the material that makes up the universe spontaneously appeared out of nowhere than to believe it was created by God?

Don’t let the atheist stop at life on earth; make him go back to the origins of the universe itself. The goal is to take him back to the concept of the First Cause, which is nothing more than, “Where did all this stuff come from that created the earth and us, if not from God?” A clever way to bring this home to point home is to engage an atheist in the following conversation. I’ve had this conversation with many atheists and nearly every one takes the bait.

Catholic: Pretend I invite you to dinner. You walk into my home and in the center of the living room is hanging the most beautiful mobile of the universe you have ever seen. The heavenly bodies suspended from the nearly-invisible frame are perfectly formed and crafted with the most intricate, realistic details. The moons, stars, and planets are positively luminous, with their colors swirling around each one so vividly it almost appears the paint is moving. You’re struck by the beauty of this model and are deeply moved.

If you saw this in my house, what would be the most likely question you’d ask me?

Catholic: And what would you say if I said, “No one made it. It just appeared there one day?”

Joe Atheist: I’d say that was ridiculous. Nothing just “appears” out of thin air.

Catholic: And if I insisted that it did …?

Joe Atheist: Then I’d insist that was still ridiculous/stupid/dumb.

Catholic: Well, isn’t that how you say the universe and the earth and human beings got here? 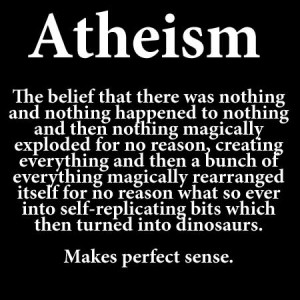 At this point, you may be called “stupid” or “closed-minded.” You might get a laugh or if you’re lucky, anger! But be assured: the arrow hit its mark.

I don’t know why so many Catholics ignore one of the most potent evangelizing weapons in our arsenal: miracles. We have so many, after all. The miracles at Lourdes. The Eucharistic miracles. The Incorruptibles. The medical miracles all over the world used in the canonization process.

Our son, Damien, is named after Father Damien of Molokai. Saint Damien was canonized in 2009 after the Vatican confirmed his second miracle, a spontaneous remission of lung cancer in a Hawaiian woman. The cure was initially documented by her physician, Dr. Walter Y.M. Chang, in the October 2000 issue of the Hawai’i Medical Journal.

More than once, I’ve challenged an atheist to explain the disappearance—not remission, disappearance—of cancer in a person who prayed for that cure. Whose cancer was solidly documented as terminal and who had no other medical treatment. The best most atheists can come up with is that the woman psychosomatically healed herself.

It’s not enough to say, “A miracle took place here.” Have resources on hand. Research one or two kinds of miracles and if possible, obtain secular confirmation of the facts associated with them. It can be especially helpful to obtain testimony from the atheistic doctors and scientists who have confirmed miracles at Lourdes and as part of the canonization process, because it’s powerful stuff coming from one of their own. (Dr. Felix Leseur is just one staunch atheist who was converted at Lourdes; he later became a priest.) I keep an electronic copy of the journal article to forward to atheists. Oddly enough, I rarely get a response to that e-mail…

Don’t be afraid to cite non-Catholic miracles, either. Challenge the atheist to explain the incorruptibility of Buddhist Lama Dashi-Dorzho Itigilov, who died in 1927. His body was exhumed in 1955, 1973, and 2002. Each time, the body was examined by scientists, pathologists, and monks. In 2002, Professor Viktor Zvyagin of the Federal Center of Forensic Medicine examined the body and concluded it was in the condition of someone who had died 36 hours ago. Medical tests confirm the body isn’t embalmed or preserved in any way.

Even atheists who claim bodily healing is psychosomatic will rarely claim it’s possible to hold back decay after death through sheer will.

Strategy #5: Point out the atheist’s inconsistency.

Atheists will say they can’t believe in God without “proof.” The Misfit, a murderer in Flannery O’Connor’s short story, “A Good Man is Hard to Find,” articulates the atheist’s need for eye-witness testimony:

Make sure to confirm this point with the atheist a few times: “So you must have proof that God exists to believe that He exists? You need hard evidence, you’d have to see God yourself to believe He exists?” Then…

…ask the atheist if he has proof Alexander the Great existed. Or Plato. Or his great-great-grandfather. No? So without ever actually having seen these people or even seen their bodies, he believes they exist and did X, Y, Z.

Ask if he believes the universe is made up of atoms, which are made up of electrons and neutrons. Does he believe the human brain transmits information through electrical signals? That the earth’s core is molten liquid? And when you get his answers, ask if he’s ever seen an actual electron or electrical signal in the brain or the Earth’s core.

No? Why, then, is he willing to believe those facts as true without evidence in front of him? Why does he take the word of scientists, historians, and yes, even relatives he’s never met as sufficient “proof” that someone existed or that something is true, but demands hard, personal evidence that God exists? Why does he accept the testimony of a historian he’s never met that Abraham Lincoln existed, but won’t accept the testimony of a loved one who says she has met and knows God personally?

The truth is that atheists, like all of us, take 99% of what they “know” on faith. Point out their  inconsistency in demanding hard evidence for the existence of God, but accepting without proof the testimony of others for all the other facts they accept on faith. 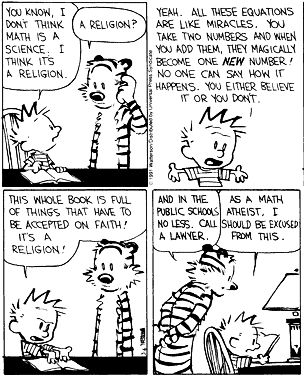 Atheism: Accepting on faith everything you're told--except that stuff about God.

by MistyPosted in Ink Slingers, Misty

« Not Every Woman is as Strong as I AmSilent Grief »