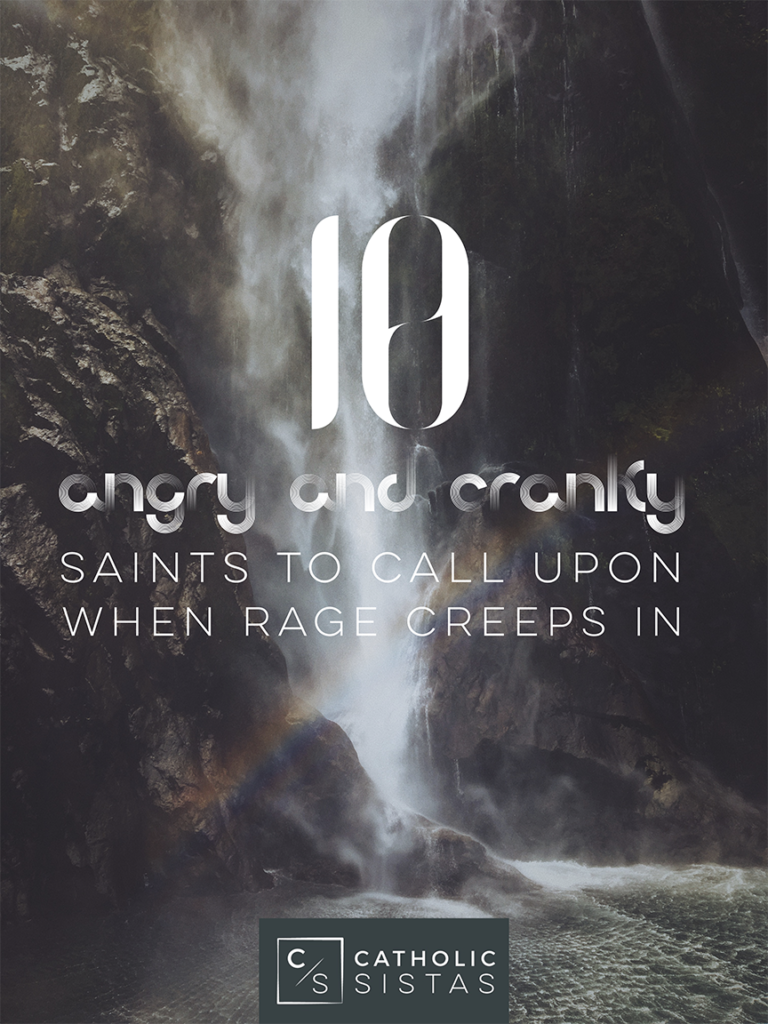 Even on my most “ragiest” of rage days, there was always something in the back of my mind – calming, soothing, logical – reminding me that the emotions I was sucked into were damaging.

It wasn’t anything to be proud of. Saints often heard from me. I could never decide if they were sympathizers or correctors of bad behavior, but I often implored their intercession in helping me overcome the extreme levels of anger I often encountered.

But it would seemingly fall upon deaf ears – thanks a lot, Saints. ?

Or so I thought.

Years prior to, I had had an ‘aha’ moment in which I was able to trace back the source of this rage habit. Though the source of that anger was not my fault, as an adult, that no longer mattered. No amount of finger pointing would budge the behavior spun out of control unless I made the conscious effort to do something about it.

WAYS TO HOSE DOWN THE ANGER

While God didn’t create us to be angry all the time, I knew I would have to find some ways – both spiritual and practical – to help hose off those angry feelings. Looking to Sacred Scripture, the following verses seemed to be a good first place in tempering those flare ups:

“In your anger do not sin:  Do not let the sun go down while you are still angry, and do not give the devil a foothold.” ~ Ephesians 4:26-27

“Don’t have anything to do with foolish and stupid arguments, because you know they produce quarrels. And the Lord’s servant must not quarrel; instead, he must be kind to everyone, able to teach, not resentful.” 2Tim 2:23-24

And my personal favorite

“But now you must rid yourselves of all such things as these: anger, rage, malice, slander, and filthy language from your lips.” ~ Colosians 3:8

Whoops. Cuz when I’m angry, loose lips follow. And then there is the imagery of me reaching out in vain to grab the words that were spewed in anger.

Can I unsay that thing I just said? Takesies backsies would REALLY be helpful right now.

EVEN THE CATECHISM HAS SOMETHING TO SAY ABOUT RAGEY FITS

“An emotion which is not in itself wrong, but when it is not controlled by reason or hardens into resentment or hate, becomes a capital sin, a mortal sin.

By recalling the commandment, “You shall not kill,” our Lord asked for peace of heart and denounced murderous anger and hatred as immoral.

Anger is a desire for revenge. “To desire vengeance in order to do evil to someone who should be punished is illicit,” but it is praiseworthy to impose restitution “to correct vices and maintain justice.” If anger reaches the point of a deliberate desire to kill or seriously wound a neighbor, it is gravely against charity; it is a mortal sin. The Lord says, “Everyone who is angry with his brother shall be liable to judgment.” CCC 2302

St. Jerome – my absolute favorite cranky saint who was known to carry a stone around with him and hit himself when he lost his temper. A bishop was known to remark “You do well to carry that stone, for without it the Church would never have canonized you”

St. Peter – Ah, my favorite foot-in-mouth saint! Striking the high priest’s ear off with the sword might have been insight into his temperament, but as we know, God works with us, no matter where we are in the battle with our temper. Violence is never the answer to an injustice.

St James, the son of Zebedee (nicknamed Son of Thunder) – taken from the iBenedictines site, this perfectly sums up his personality with respect to anger: “[He] had a pushy mother and a reputation for temper, wanting to call down fire and brimstone on a Samaritan town which would not accept them. James is thought to have been the first of the apostles to die for his faith (cf Acts 12.1), and I am not alone in suspecting that fiery temper of his had something to do with it.

Where there is  great fear, there will often be great anger, too. St James makes a wonderful patron for people with hot tempers for the simple reason that his temper was his glory. He took something that most people, certainly most religious people, would condemn, a capacity for anger, and allowed grace to transform it into energy for good. The hot-headed James we see in the gospel, a man who was probably a bit defensive and unsure of himself, became fearless for God, valiant for truth, a mighty champion of the Lord. He reminds us that God makes saints not in spite of our flaws but through them.”

Mother Angelica – Can you even believe it? She was known to say ““St. Jerome used to hit himself with a rock every time he lost his temper. I’d be dead as a doornail with no ribs if I did that.”

Dorothy Day – when I read what a man said about her: “She’s been in my house a number of times and she was always angry. Saints aren’t angry…” it called to mind how some of our crosses are worn on our sleeves – anger, not withstanding.

St. Eulalia of Mérida – though she was sweet and pious, this 12 year old also had a stubborn and fiery streak and an iron will which surely led to her to being a martyr after spitting in the face of a pagan ruler.

HOW TO DEAL WITH FITS OF ANGER AND PROVOCATION?

St. Ambrose of Milan – To avoid dissensions we should be ever on our guard, more especially with those who drive us to argue with them, with those who vex and irritate us, and who say things likely to excite us to anger. When we find ourselves in company with quarrelsome, eccentric individuals, people who openly and unblushingly say the most shocking things, difficult to put up with, we should take refuge in silence, and the wisest plan is not to reply to people whose behavior is so preposterous. Those who insult us and treat us contumeliously are anxious for a spiteful and sarcastic reply: the silence we then affect disheartens them, and they cannot avoid showing their vexation; they do all they can to provoke us and to elicit a reply, but the best way to baffle them is to say nothing, refuse to argue with them, and to leave them to chew the cud of their hasty anger. This method of bringing down their pride disarms them, and shows them plainly that we slight and despise them.

St. Anthony Mary Claret – Tell me, if you had a very dear brother who was so sick that he was delirious and in his fever insulted you and said every foul thing in the world to you, would you abandon him? I’m sure you wouldn’t. You’d feel all the more sorry for him and do everything you could for his recovery. Well, that’s the way I feel about sinners. The poor creatures are just delirious. That makes them all the more deserving of compassion. I can’t abandon them. I have to work for their salvation and pray to God for them, saying with Jesus Christ, “Father, forgive them, for they don’t know what they’re doing or saying.’’

St. Vincent de Paul – seldom mentioned was his bad temper. The irritable saint was not driven by anger at the injustices of the world. He was, rather, driven by his deep love for Christ who taught him how to get over himself and his anger. He responded to a sister who was having trouble praying:

Each one can take her stand at the foot of the Cross, in the presence of God and, if she had nothing to say to Him, let her wait till He speaks to her; if He should leave her there, let her remain there willingly and await from His bounty the grace of either speaking or of listening to Him.

His advice? Place ourselves at the foot of the Cross, the ultimate image of love and hope.

I think we all know – deep down – that anger, particularly when it’s righteous and handled well, has benefits (hello, Jesus turning tables over in the temple, anyone?). But, we also know that’s not what we’re talking about here. We’re talking about reigning in an emotion that has led to (and could potentially lead to) destruction in some of our lives. The addictive high that comes with rage (when we are real and raw with ourselves) has to be tempered, for our own good and for the benefit of those around us. In short, we need to become better about asking God the Father, Son, and Holy Spirit as well as Mary, and all the Saints in heaven for help when we need it. And while anger can be a stumbling block for many of us, we know we don’t have to carry this cross alone. Those in heaven are there to help us – let’s take them up on their offer.

« The Flight Home and the Beauty of the Kindness of StrangersMea Culpa: Correcting Misunderstood Mariology »