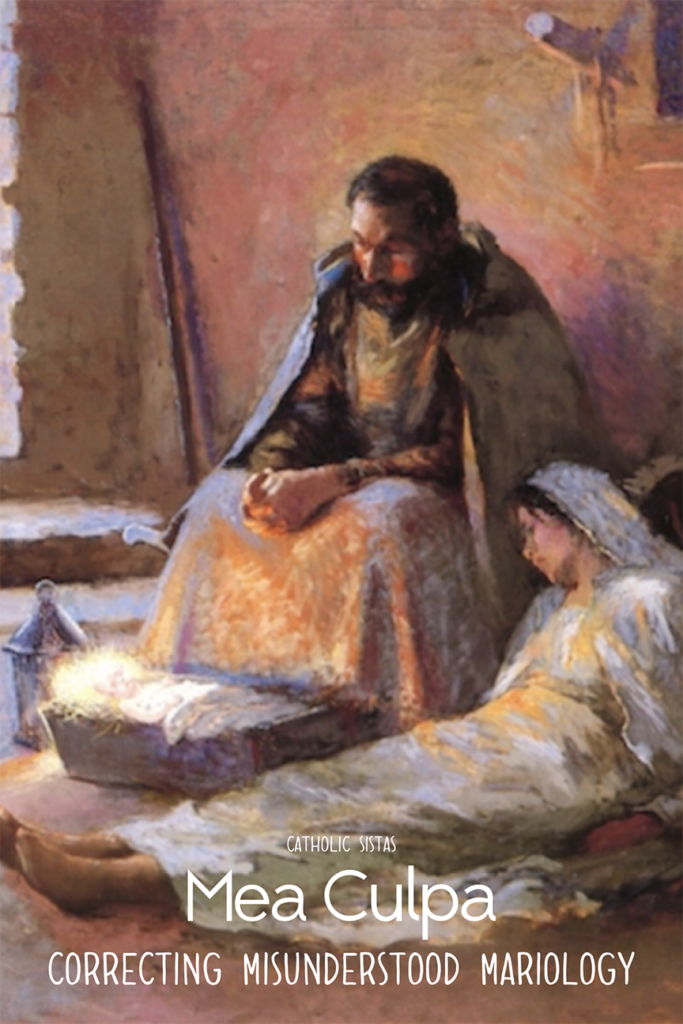 This past December I wrote a reflection on  the Nativity using a painting I’d fallen in love with.  The aspect of the painting I so loved was that the Blessed Mother was depicted in a collapsed pose, appearing to be completely spent after laboring and giving birth to Christ.  She appeared as any mother would—exhausted and relieved after going through great suffering in delivering a child.

As a convert, I mentioned my appreciation for this depiction because I had always found Mary and Mariology so very difficult to swallow. In this particular post I also gave lip service to the pious devotion in the belief Mary did not labor in pain. To me it seemed a sweet thought, but I needed to be able to identify with Mary and so I waved off the idea that she was preserved from arduous labor and instead bore Christ just as any woman would bear a child.  Fortunately, my mistaken idea was completely dismantled after listening to a Podcast this past Lent. Mea culpa.

[Mary] indeed conceived without shame, gave birth without pain, and went hence without corruption, according to the word of the angel, or rather (the word) of God through the angel, so that she should be proved to be full, not merely half filled, with grace and (so that) God her Son should faithfully fulfill the ancient commandment that he had formerly given, namely, to treat one’s father and mother with honor.

Why this makes sense

Of course this all makes sense to me now. First of all, the Marian dogma of the Immaculate Conception dictates Mary was accorded the singular Grace of being conceived without the stain of Original Sin. Because of this gift, she would have been spared the punishment of Eve—an aspect of which was to bear children in great pain and suffering.

“Before she was in labor, she gave birth;

before her pain came upon her

she was delivered of a son.

Who has heard such a thing?

Who has seen such things?”

Secondly, to bear a child in the conventional sense would have marred her perpetual virginity. It is Catholic dogma that the Blessed Mother’s virginity was left completely intact before, during, and after bearing Christ. I believed this but had not honestly connected the dots between the nature of Christ’s birth and Mary’s perpetual virginity.  In my mind, I justified my attempt at identifying with Mary as a mother by believing her perpetual virginity was more spiritual than physical. How very wrong I was. My mistaken thinking was indicative of a serious error we moderns are prone to making in searching for natural explanations for supernatural events. Mea maxima culpa.

If one takes a good look at Catholicism, most every aspect of our Theology has spiritual and material components—just as we are made up of spiritual and material components. Take for example the sacraments.  Each has a physical, material, natural sign integral to it which conveys something of the supernatural in the way of grace: water for baptism, verbal confession and absolution for penance, bread and wine for the Eucharist, holy oils for confirmation and anointing of the sick, laying on of hands for Holy Orders, the exchanging of vows and consummation for marriage.

Consider further the Holy Eucharist and the doctrine of the Real Presence. Not only is Christ supernaturally, spiritually present when we receive him. He is truly physically present in His body and His blood when we receive Him. It becomes increasingly clear how important the connection between natural realities and supernatural realities truly are to our faith. Of course Mary’s virginity must be both natural and supernatural.  Following this truth to a natural conclusion; Mary could not have born Christ like all other women in suffering and pain.  Church Father’s describe His birth much like light passing through glass. His birth was painless, peaceful, and miraculous.

Dear Sistas, I ask pardon for my mistaken thinking; my desire to make Mary into my own image as a mother who bore her child arduously. I hope I have remedied my error and brought clarity to an interesting and uniquely Catholic teaching.

As you’ve grown in understanding of the faith have you ever discovered a mistaken belief? Tell us about it and how you came to a new and corrected understanding of Church teaching in the comments.