This past weekend we had the first Scrutiny at our parish, for those adults who are preparing to be baptized at the Easter Vigil. I love this time of year. This Easter will be 2 years since my children and I came into the Catholic Church. Not only that, but also watching others going through the process makes it very hard not to shout out to them “This is SO flippin’ AWESOME!” during Mass, while doing cartwheels. The hope that comes from Lent and how much closer I feel to God during this time of year is just priceless. I used to think that Lent was a time of long faces and suffering, and last year I honestly had the hardest time ever during Lent, but it was still all about Jesus. And all about the many blessings that God has given me even after all times that I had turned away from Him. In the end it was well worth it and I learned a lot from it.

Having the first Scrutiny during Mass means that the normal readings for the third Sunday of Lent aren’t read. The Gospel for that week is usually the one where Jesus flips tables in the temple. I love this Gospel to the max and usually I can’t really think about it because I will end up justifying all kinds of bad behavior on my part and trust me flipping tables would be on the list of things I would do if I could get away with it! But since it was the Scrutiny we heard the Gospel of the woman at the well.

Let me tell you that there was a time when Mass was very boring for me, and when I didn’t even realize that the readings were all coming from the Bible. But these days, I’m glued to whoever is reading and doing my best to listen. I still space out every once in a while and have to gather myself and get focused at times, but for the most part I’m paying attention. But once the Homily starts, I’m at full attention. God bless good priests, because I am very spoiled when it comes to good homilies.

Father Jonathan began his homily explaining all the details of the story of the woman at the well. He explained that she was a Samaritan, a woman, and was getting water in the middle of the day. All of those things were reasons that Jesus, being the respectable Jew that He was, should not have even talked to her. Not only did He talk to her, but He asked her for a drink. I don’t know about the rest of you but I can picture that scene in my head. Jesus sitting there with his loving smirk saying “Give me a drink”. And the woman  looking at him like he had lost his mind.

Then Father went into the part of the story that I had never even thought of. He said that Jesus asked the woman for her husband. When the woman said, “I’m not married”, then Jesus said “I know. The man you have now isn’t your husband either.” Just like that Jesus laid out her brokenness before her. But he didn’t do it to be cruel or to judge her. He did so to be able to forgive her. As Father said in his homily, Jesus examined her conscience for her. And He desires to do the same for each of us. He wants to come into our hearts and flip tables, and drive out all the sins of our hearts so that we can be with Him. He wants to make our brokenness clear to us, not to shove it in our face, but so He can heal us!

When Jesus hung on the cross and said the words “I thirst”, it wasn’t for water. It was for you and for me. It was for our soul, our heart, our love. He created us to be with Him for eternity, but He didn’t create us to be robots. He wants us to LOVE Him. We do that by obeying His commandments. The second that we forget that, we start going down the wrong road and it will always end in heartache.

I remember the moment that Jesus said “I thirst” to me. It was the night that I sat in a county jail cell after being arrested for a DWI. I had already had my meltdown in my car after hearing about God’s love for me. I had already started RCIA, and I had already started learning about the Catholic Faith. But I decided I needed a “break” from all the holiness and I went and sat at the bar I had worked at and got smashed. On the way home I was pulled over by a DPS officer and arrested for DWI. Sitting in that cell, I hated everything. In my mind I had been doing everything right and still here I was. I was a screw up and was never going to get this Catholic thing down. Things got pretty rough after that, I won’t even go there but it was pretty ugly for a while.

As I sat in my probation officer’s office I was thinking about how much I hated this whole situation, and how stupid I had to be to think that I, of all people, could be a good Catholic. Who was I kidding?! Right as I was about to sink into “This is it, I give up. I’m not Catholic material” I looked up and there was a sign on my PO’s wall that said “Be still and know that I am God”. That was it. That was Jesus on the cross saying “I thirst”. That was when I was given my choice: death or life.

It wasn’t until this past Sunday that I even looked back and realized it. I knew that the DWI changed my life. I did not have a drinking problem. I had a Jesus problem.* I went through all of my counseling, classes, a year of no drinking (well except for my trip to Rome…), Cognitive Ed classes, and becoming really close to my Probation officer. I actually miss meeting with her every month now. I never did recognize it as the moment when I actually made a choice to pick up my cross and follow Jesus. Much less the moment when he asked me for a drink and I looked at Him like He had lost His mind. But that is exactly what that was. A lot of things happened after that moment, and by no means was that the last time I had to make the decision to be a follower of the Living God, but the whole thing looked completely different when I saw it through the story of the woman at the well.

Have you heard Jesus ask you for a drink? What is it that He thirsts for from you? 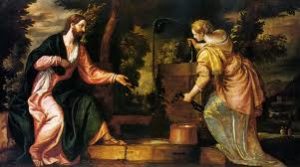 One Reply to “What Does Jesus Thirst for From You?”