One of my sisters-in-law is an elementary teacher in a public school. She once told me that one of the ways she subtly spreads a Christian message is by teaching her students that when someone apologizes, they should respond not with “It’s OK,” but instead with, “I forgive you.” When you tell someone they are forgiven, you acknowledge that what they did was wrong but also express that you love them anyway, and will let go of the hurt they caused. Conversely, simply saying “it’s OK” implies that what they did was not really wrong or did not hurt. I had never really thought about it like that before, but I immediately saw the wisdom in her approach. Through this simple instruction to her students, my sister-in-law teaches them true mercy.
These days, there is a profound misunderstanding of mercy in our culture – both the secular and Christian parts. People rightly sense that mercy is a necessary virtue, but they do not understand how to exercise that virtue properly. A common way that people attempt to exercise mercy is to excuse or explain away another’s behavior so that the other person won’t feel bad about it. The focus is on assuaging their consciences. There is a prevailing belief that feelings of guilt are caused externally, by others “shaming” a person. Mercy is an effort to relieve those feelings of guilt by telling people they have nothing to be ashamed of. For example, it is considered “merciful” to advise abortion for women in crisis pregnancies or who are facing difficult prenatal diagnoses, and the opposite of mercy to hold the position that abortion is wrong. An example within our Church is that many Catholics (including many priests) believe it “merciful” to tell couples that they may use contraception in difficult circumstances (or whenever they want!), and unmerciful to hold people to the teachings of the Church.
True Christian mercy, however, is about healing. Sin harms us, whether we realize it or not. If we want to show mercy, we must focus not on making others feel better about themselves, but on making them actually better. Jesus likened himself to a physician who came to heal those that were sick. His curing of physically ill people was to demonstrate the spiritual reality taking place when he ministered to sinners (the spiritually ill). Those who were already “OK” did not need him. Can we really say it is true mercy to tell sick people that they really aren’t sick and they don’t need to worry about getting well? Sure, it probably will make them feel better for a time. They might feel relieved and hopeful at first. But they will not be healed, and they may eventually perish because their illness was left untreated. When Jesus met the woman at the well, he gently called her out on her many “husbands,” making her uncomfortable with her behavior. When he saved the adulterous woman from being stoned, he told her to “go and sin no more.” Yes, he fellowshipped with tax collectors and prostitutes, but an encounter with Jesus never left anyone feeling like their life was just fine the way it was. 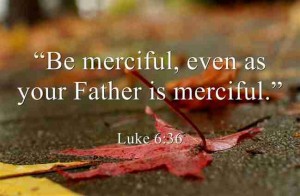 Mercy requires understanding and compassion, and the humble recognition that we are not “too good” to commit any of the sins for which we might feel tempted to judge others. Yet, it also requires Truth, because it is only in acknowledging the reality of a situation that we can begin to make it better. During this designated “Year of Mercy,” Pope Francis certainly has emphasized the importance of being compassionate toward others, “accompanying” them in their difficulties. But he has also emphasized the importance of going to confession for healing. He says that sin makes us blind, and confession is where our sight is restored. When we go to confession, we have to admit we are sinners (acknowledge the truth of our situation), profess that we are sorry, and vow to try to avoid sinning in the future. The priest is meant to respond how the Lord responds to sorrowful sinners – not by saying “It’s OK,” but by saying “You are forgiven; now go and sin no more.” Like Jesus, his job is not to tell us that we were seeing just fine, but to facilitate the recovery of our lost sight.
The final document from the Synod on the Family is expected to be made public tomorrow, April 8 (which also happens to be the anniversary of the funeral of Pope Saint John Paul II, who introduced and promoted to the world the Divine Mercy devotion). Many people are expecting this document to contain a concession for Catholics who are divorced and “remarried” without an annulment to receive the Eucharist, despite the fact that they are remaining in an objectively sinful state. They believe that this would be in keeping with Pope Francis’s message of mercy. On the contrary, this would be the opposite of mercy. It would be akin to telling a sick person that they aren’t really sick, or a blind person that their sight is perfect. The Church has a sacred responsibility to stand in the Truth, even if the Truth doesn’t feel good. I am praying that Pope Francis is not swayed by the cultural misunderstanding of mercy, but will hold fast to the Truth so as to facilitate authentic healing by the Divine Physician.

One Reply to “True Mercy”