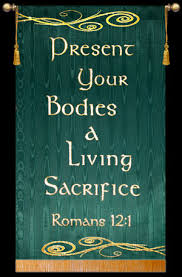 I was searching for the Bible verse that says something like, “As much as possible, live at peace with all men.” I found it in Romans 12:18 and backed up to read the whole chapter to make sure I understood the context. What a slap to my face. It is the beginning of the end section of Romans, the practical catechesis flowing from the previous chapters’ theology. It opens with the oft-memorized verse, “I appeal to you therefore, brethren, by the mercies of God, to present your bodies as a living sacrifice, holy and acceptable to God, which is your spiritual worship.” Then it continues with many pointed exhortations, some of which read:

Do not think of yourself more highly than you ought.

Let your love be genuine.

Hate what is evil.

Hold tight to what is good.

Outdo each other is showing honor.

Be patient in tribulation.

Be constant in prayer.

Repay no one evil for evil.

Take thought to what is noble.

Do not be haughty but associate with the lowly.

And from my initial search — If possible, as far as it depends on you, live peaceably with all.

The chapter ends with, Overcome evil with good.

It was exhausting to read. Talk about offering my body as a living sacrifice.

The idea of sacrifice is nothing new to history. It is the act of offering to a deity food, incense, animals or any object deemed precious. This could even, in some cases, include the ceremonial eating of the offering, like the Passover lamb. Sacrifice is widespread in the history of religion in general. In the Old Testament we see humankind’s attempt, with its shortcomings, to reach out to God. Although God was doing plenty of reaching back then too, in the New Testament we see His attempt, with its ultimate flawlessness, of reaching out to humankind in the Person and perfect sacrifice of His Son.

A sacrifice has two general aspects: (1) as a gift handed over for the good of another (as in Mark 7:11 where the Aramaic word “Corban” denotes an offering of something dedicated to God for a religious purpose); (2) As an article of burning to be utterly used up (this is seen in the detailed instructions of Leviticus).

The first recorded act of sacrifice is found in Genesis 4. Abel gave his very best; Cain did not. How interesting that both were voluntary acts and likewise became a disclosure of character!

The Apostle Paul was writing to some of the early Christians living in Rome, who, whether Jew or Gentile, would have had no problem grasping the concept of sacrifice. The majority of Paul’s epistle outlines a vast theological discourse until one arrives at Chapter 12. There is where Paul answers, “How should we then live?” It is in Romans 12:1-2 that he lays the foundational groundwork on our part; that is, offering our bodies as living sacrifices. Interestingly, Paul explained in Chapter 6 that the possibilities of the body, for good or evil, is tremendous. How to offer ourselves a living sacrifice? 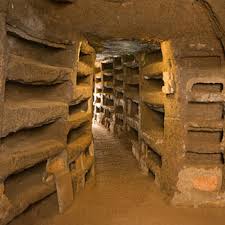 History teaches us that the early Christians of Rome who were the recipients of Paul’s letter, both originally and within the next few centuries, were strictly moral in their conduct. For example, they would not attend coliseum games or pagan feasts. Sadly, tolerance was not the virtue of the day and eventual ridicule and persecution found its way in Rome. If plagues came, if the Tiber River overflowed, if crops failed, the cry was, “Christians to the lions.” Yet the response of these early Christians showed benevolence to all who were in difficulty, even remaining to nurse the ailing during the plague when others fled and caring for abandoned women and children. They gave themselves up daily as a living sacrifice. Archeology has discovered that there are around six million people buried in about sixty catacombs in Rome, dating back to the first few centuries. Fifty-four are Christian and six Jewish. They sacrificed their living and their lives. How paltry my sacrifices seem in comparison.

As a Catholic, it is a simple sacrifice to offer my body in worship during the Mass as I stand for the reading of the Gospel, raise my hands for prayers, kneel for the Consecration, bow before the Lord, and cross myself. Our sacraments are hands-on: pouring water, wrapping in white, eating and drinking, speaking our sins, anointing with oil, laying on of hands, and prostrating before the altar.

As a wife and mother, my body is constantly offered as a sacrifice to my family – sometimes protesting like an animal being dragged to the ancient altar! Saint Paul’s appeals come into play every single day within our own four walls. Our family is part of our larger community as well. What would it look like out there if we tried better to love genuinely, to hold tightly to God, to outdo each other in honoring, to not repay evil for evil, to not be haughty, etc.?

This work of being a living sacrifice must begin anew each day. May Saint Paul’s practical exhortations become a living reality beginning in our marriages and families, and may it extend to others, whether close friend, mild acquaintance, or stranger in need. That is how we can, as much as it depends on us, live peaceably with all. With God’s helping grace.

One Reply to “To Sacrifice Our Living”