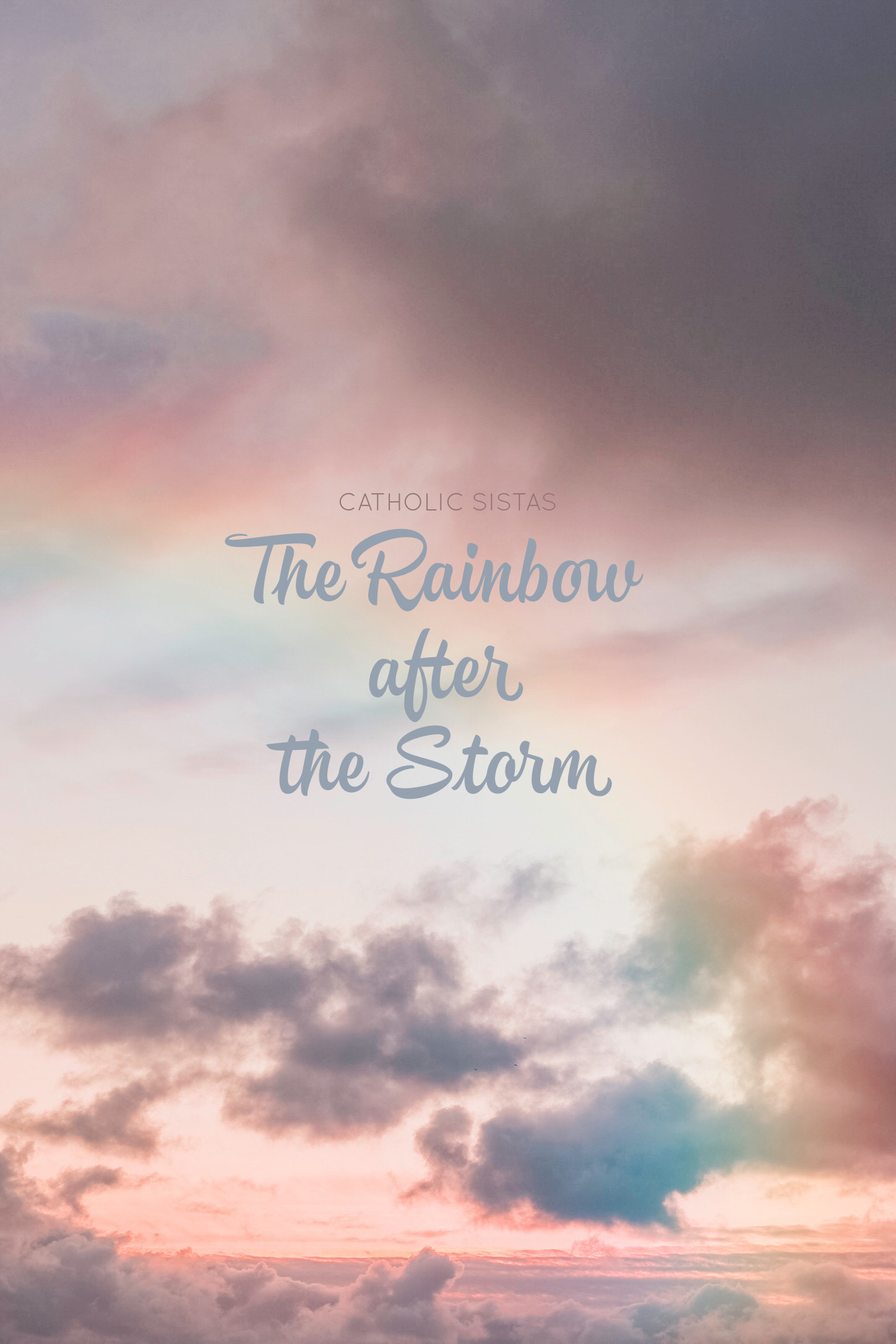 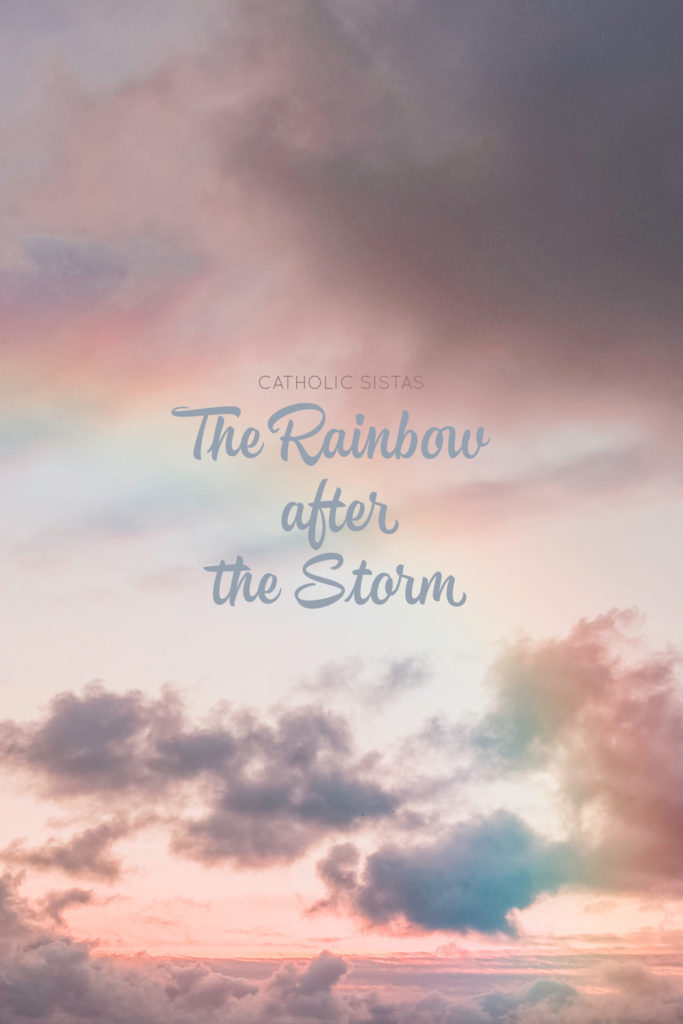 I always told myself I’d be satisfied with the family size we had, whether that was one child or many. And so it came to be that five more children would follow the first – and in an order that proved God has a sense of humor, girl boy girl boy girl boy. What we didn’t expect was the storm that was brewing unbeknownst to us. It would be years before the rainbow finally showed its face.

When we got pregnant after #6 was born, we started to brace ourselves for what was to come. We had recently downsized from a rather large home into a much smaller one to be close to our home parish. Multiple daily trips there and back for Mass, youth ministry, RE, volunteer meetings, parent meetings, children’s choir, altar boy trainings, weddings and funerals, and spiritual direction, it just seemed like the right move. We wanted the neighborhood – or so we thought – until we realized that our size 10 shoe of a family was being squashed into a size 5 shoe of a house.

But it wouldn’t matter.

That was November 2014 – almost four years ago when our entire family experienced our first and most devastating miscarriage. It was the most devastating only because we didn’t see it coming. It was my grief, my husband’s grief, our grief together as a couple…then there was our children’s grief, both individually and collectively. And lastly, it was our family’s grief. It was almost too much to bear, but we muddled through it. We gave her a name right away, following our birth order, of course – Felicity Gertrude, or baby Gertie. We asked her in our nightly prayers to pray for our family and the practice of normalizing her place in the family began with such mixed emotions.

My due date came and almost went. I realized it on the actual day as I lay in bed, ready to go to sleep. Sad thoughts crept into my head, but I brushed them aside. I made it a priority to focus on the fact that God is good all the time. I had spent a considerable amount of time in grief after the loss of our little one and allowed myself to experience all those emotions.

Our oldest was 18 at the time and always went to her own favorite Mass time, while the rest of our family went to our usual 9:30 a.m. Mass time. Going all together as a family was a rare treat, usually only enjoyed on Thanksgiving. And so it happened that the first Mass we went together after our loss on November 15, 2014 was ON Thanksgiving. The woman leading the rosary before Mass prayed the St. Gertrude prayer at the close of the rosary – and that’s when I lost it. Ugly cry, don’t care WHO sees me, this crying is happening NOW kinda cry. We were all together – our whole family – because during Mass, heaven and earth meet and our lost little was with us.

Little did we know losing Gertie would be the beginning of multiple losses. Soon after her burial on Our Blessed Mother’s solemnity, the Immaculate Conception, we would find ourselves pregnant again in January – Michael Christopher. It was cautious optimism followed by almost instant grief. A week passed from learning of our next baby to his death. It was over almost as soon as it had started.

The numbness sets in.

Loss three would be the following January 2016 – Sarah Olivia, whom my daughter named. My due date was to be our anniversary, on the actual date. I found solace in this connection, but it was stacked alongside inevitable grief. God was done with our family here on earth, I was sure of it.

Remember when I said I had always worked hard to be happy with our family size? Six children appears to many as a very large family and sometimes the outside perception is that it’s too many or pangs of sadness aren’t necessary seeing as we already have “too many children” by society.

And yet both mine and my husband’s heart desired to continue to be open in the face of what felt like a continued string of miscarriages – lost babies.

It wasn’t until I saw the look of sadness on my sweet Josie’s face when we became pregnant for a 10th time that I realized the depth of the grief and impact of those losses on our family. However, my hcg numbers were strong, everything looked good, the doc (and personal friend) had me on progesterone (again). It was more hope than we’d seen since my pregnancy with #6 in 2011. I did my best to assure my sweet five year old girl that it seemed like we might get to meet this little one.

And so we did. In January 2017, we welcomed our sweet Emmaleine Rose (Emmie to friends and family). When I was pregnant with her, I did a lot of soul searching, talking to God, and putting in petty requests like, I want her to have green eyes and curly red hair. He, however, did NOT give me a red headed green eyed girl like I wanted, lol, but she has the MOST FABULOUS brown curls and STUNNING blue eyes that may turn green, as most of our kiddos have some shade of green or hazel eyes. 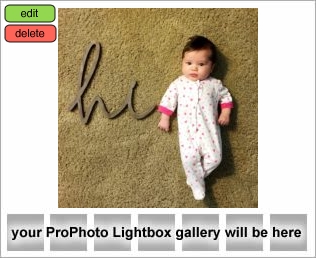 My pregnancy with Emmie was by far one of my most physically difficult, ending up with SPD, which made it practically impossible to walk, and affecting my ability to walk even months after her birth. And yet my pregnancy with her carried with it some of my best memories. I cherished each moment we had together. I talked to her, played with her when she rolled around like a barrel and tried to break my ribs with her feet – fun times!

I wrestled quite a bit with coming to terms that these beautiful children first belong to God and that ultimately I shouldn’t dwell on despair of their losses. That’s easier to type and read than it is to really take in and make my own. I credit our priests who lifted our family in those hard times and availed themselves to us when we needed them most, showing up late at night to talk to us and help us out after they had no doubt invested 12+ hours into their work day already, or just sending a text to see how I was doing. Pastoral didn’t even begin to cover how they made our family feel in those troubling times.

Looking back, I know it wasn’t only the hope and desire of a baby after three losses that brought that catharsis full circle. Instead, it was a combination of Emmie, our priests, and the complete surrender to God’s will that brought a final sense of peace.

God is in control.

And God is good, all the time.