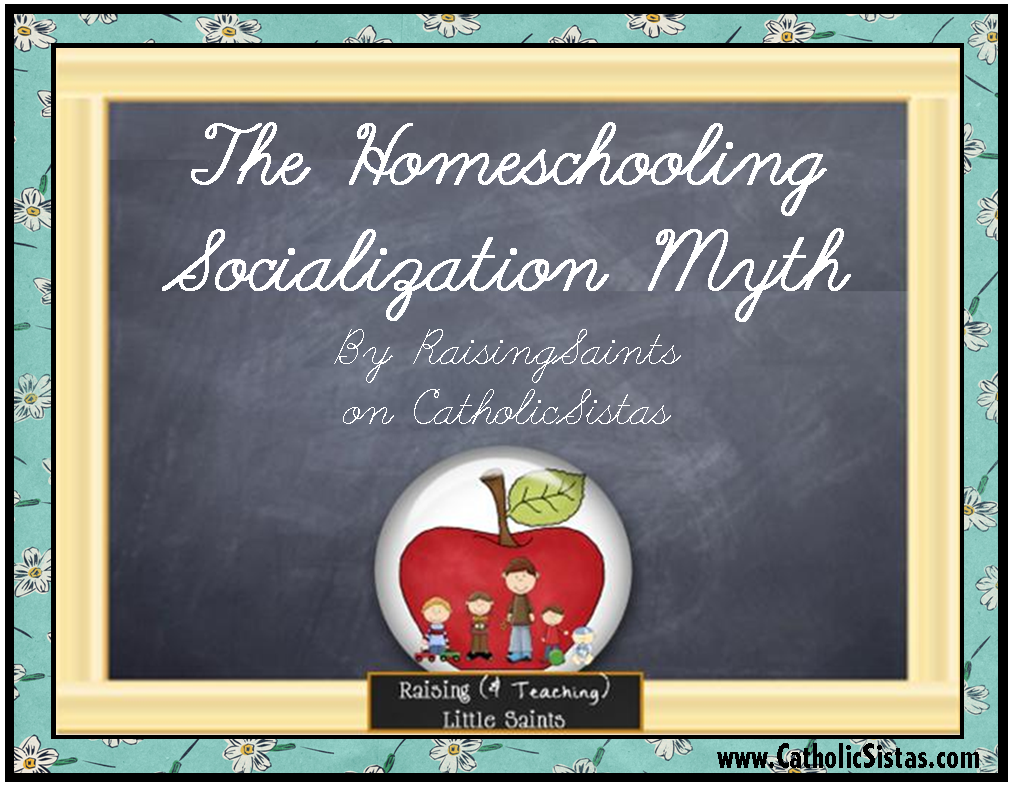 A couple of years ago, in my local newspaper, there was a nice article about a homeschooling family with five children. They quoted the home schooled children and the author spoke statistics…when 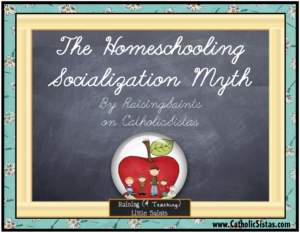 I saw it laying on my kitchen table, I thought wow how exciting and went on, with much enthusiasm, to read the article. Later on I checked my e-mail and saw lots of messages from local home schoolers who were outraged by the comments being left on-line regarding the article. I skimmed through those messages (a bunch had already been blocked by the paper) and noticed the one prevailing topic: socialization. Generalizations about any group of people is common among humans.  So this was not a shocker.  But when I read comments from other who have never walked in the shoes of a homeschooling family it made me think that they believe that we keep our kids in a closet (without windows) and don’t allow them to go out and be “socialized”.

So I began to think about what socialization is in the schools.  This led me to think back on the past 20 years of my life as either a teacher’s aide, student teacher, substitute teacher, a teacher trainer, or a regular teacher in various settings (Catholic Schools, Charter Public Schools and Regular Public Schools).   I’ve worked in pre-schools, elementary schools, K-8 centers, Middle Schools and even had my bouts with high school. So, let’s just say…I’ve been there and seen it from a teacher as well as a parent’s perspective (my eldest attended two different parochial schools from pre-k until 5th grade before we started homeschooling).  Were those thousands of children I have worked with in my life time more socialized than the children I have met in the last four years of our homeschooling journey?  What does the “socialized child” have over our supposed “unsocialized” home schooled children? Nothing if you ask me.  From a teacher’s perspective, the home schooled child is taught to live and work with people of all ages (in their family).

So what does socialization really mean?  According to the dictionary:

so·cial·i·za·tion    [soh-shuh-luh-zey-shuhn], noun
1.  a continuing process whereby an individual acquires a personal identity and learns the norms, values, behavior, and social skills appropriate to his or her social position.
2.  the act or process of making socialistic: the socialization of industry.

“A continuing process whereby an individual acquires a personal identity”?  Really, well if anyone is going to help a child do this who best than his/her mother and father?  Next, “learn the norms, values, behavior, and social skills”…again mother and father, siblings, grandparents are the best teachers of this.  Let me be honest, I thought when I joined the home school community, I was coming with TONS of ideas and things to share.  That I was going to teach some moms some new things! Oh how wrong I was!   What I have learned from these mothers is amazing.  (some only have high school degrees, gasp! – I was told many times that I was more qualified to homeschool than they are…that is not true, quite the opposite…but more on that in another post).  Here is what they have taught me:

1. Children need to be taught to love learning and how they learn best.  (something very difficult to teach to 35 children in a 55 minute period, in only nine months of the year).

2. Children need to be taught how to learn on their own. “WHAT?” This was one of the hardest for me to understand…but I get it and it makes perfect sense….when you are in college and in life, you need the life skills to be motivated to learn something new each day.

3. Children need to interact with people of all ages and backgrounds. Home schooled children are the most polite and social kids I’ve ever been around. They say hello when you bump into them at the store. They offer to help without you having to bribe them, as it is often done in the classrooms.

4. Homeschooling is a lifestyle which, for the most part, teaches about time management, how to deal with situations you didn’t plan for, how to be ready for new things, how to lead a more stable life, how to follow a schedule (and have the responsibility of staying on that schedule).

In speaking with my friends who have more experience than I, the topic was more about creating community and in turn you will socialize your children. In analyzing this, it was very clear to me that our children are part of all sorts of communities in which they have ample and healthy opportunities to be socialized. Some examples of communities which your children might be involved in are: at church, play groups, neighborhood activities, Co-Ops, teams, scouts, sports, music classes, Little Flowers, Blue Knights, etc. My children have been involved in more activities since being home schooled than when they attended standard schooling. They are happier as well, and they are definitely social beings.

Not convinced? Just ask my next door neighbor, who is an avid gardener, about my then six year old son who has NEVER been in a formal school setting! My little guy has long conversations with her about her gardening, asking her tons of questions about what she is doing, why she is doing it, and what will be the future out come of her actions. Bless her heart, she is so patient with him. We think he might even have pushed her in her faith a little as he told her the other day that he prays for her and her garden to grow beautiful flowers…she, in turn, was spotted at daily Mass a couple of days later (our first reaction, “she’s Catholic?” as we had no idea). So yes, my son will probably not be “formally socialized” in the standards of society, or what they expect, and he will miss the likes of knowing who Sponge Bob Square Pants, or High School Musical, or anything like that is from other kids his age. Instead, he is learning about Horticulture from my next door neighbor and walking around practicing words like “Gladiolas and Daffodils” instead of singing the obnoxious tune to some of the “supposed children’s cartoons or movies”.   I think, he is pretty social…sometimes too social.

When we go to stores, my five children are little chatter boxes and at doctor’s appointments they ask so many questions.  They are very inquisitive and are accustomed to asking questions and being spoken to and explaining everything.  Adept at using their own words to describe how they feel, what is going on, and constantly learning.  I do not think they are unsociable, quite the contrary.

One of my favorite books I was handed by one of my fellow homeschooling friends was a book entitled, Haystack Full of Needles by Alice Gunther.  If you have never read it, it’s a must read.  It is not just about socialization, it is about the love that community and nourishing relationships among homeschoolers.  It is a realization that as a Church we are truly a family.