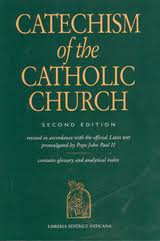 I have been thinking about the concept of entitlement quite a bit lately.  What exactly does entitlement mean?  According to Merriam Webster Dictionary, entitlement is the “belief that one is deserving of or entitled to certain privileges.” Why do so many Catholics feel entitled to the title CATHOLIC, but cannot bring themselves to actually BE Catholic?  Being Catholic is hard—very hard.

We hear people so often say, “Yeah, I’m Catholic, but I don’t really believe (insert dogma here.)”   Or “I know I’m divorced and remarried, without an annulment, but why shouldn’t I receive the Eucharist?”  “Yeah, as long as two people love each other and are consenting adults, no matter what their gender, why shouldn’t they be allowed to be married?”  “I would never get an abortion, but if someone else makes that decision for herself, that is okay.”  “I am living with my partner, but I should be able to be married in the Church if I want, no questions asked.”  “Contraception isn’t a bad thing.  The Church is so outdated and out of touch.”

The Church is very clear and steadfast in her teachings, and these teachings are not negotiable. There are too many Catholics today who feel entitled to the identity CATHOLIC.  It baffles me that if someone does not like what the Church teaches, they continue to call themselves Catholic.  Do not get me wrong, but I really feel that if you do not like the rules, then don’t join the club.  This sounds harsh, but this is not a call to judgment, but simply a plea to those Catholics who find themselves in the position of picking and choosing according to one’s moral relativism to understand exactly why the Church teaches what she does.  We have been so programmed to believe that whatever we personally deem to be okay or true must be accepted by everyone else—including the Church. It is as if the Church needs to accept that her followers will not actually follow and that is supposed to be okay.  In a sense, acceptance of the individual beliefs of others is desirable, but by definition a Catholic follows the teachings of the Church.  If your beliefs do not enable you to accept Church teaching and strive to put them into practice, then you have two choices: 1) walk away or 2) trust Mother Church, educate yourself and resign yourself to the guidance of that which has been instituted by Christ.  I prefer the latter.  I pray for my brothers and sisters in Christ to choose the latter as well.  This does not mean that faithful Catholics are not flawed, but what it should mean is that faithful Catholics continually work at being Catholic; they make mistakes, own up to them, ask forgiveness of the Lord in the Sacrament of Reconciliation, and start all over every single time.

This brings us back to entitlement.  By definition, entitlement insinuates the acquisition of privileges.  Being Catholic is a privilege, a privilege whose invitation is extended to us all, provided we make an effort.  We cannot demand the benefits of membership if we are not willing to put in the work.  We are not entitled to receive the privilege of Christ’s Body and Blood, if we have committed sin that disconnects us from Him.  We have to follow a code of moral behavior that is delineated in the Catechism of the Catholic Church.  It is a good code and as long as we follow it, we can call ourselves Catholic.  Christ invites all those who make the choice to be Catholic to do the same.

7 Replies to “The Age of Entitlement”