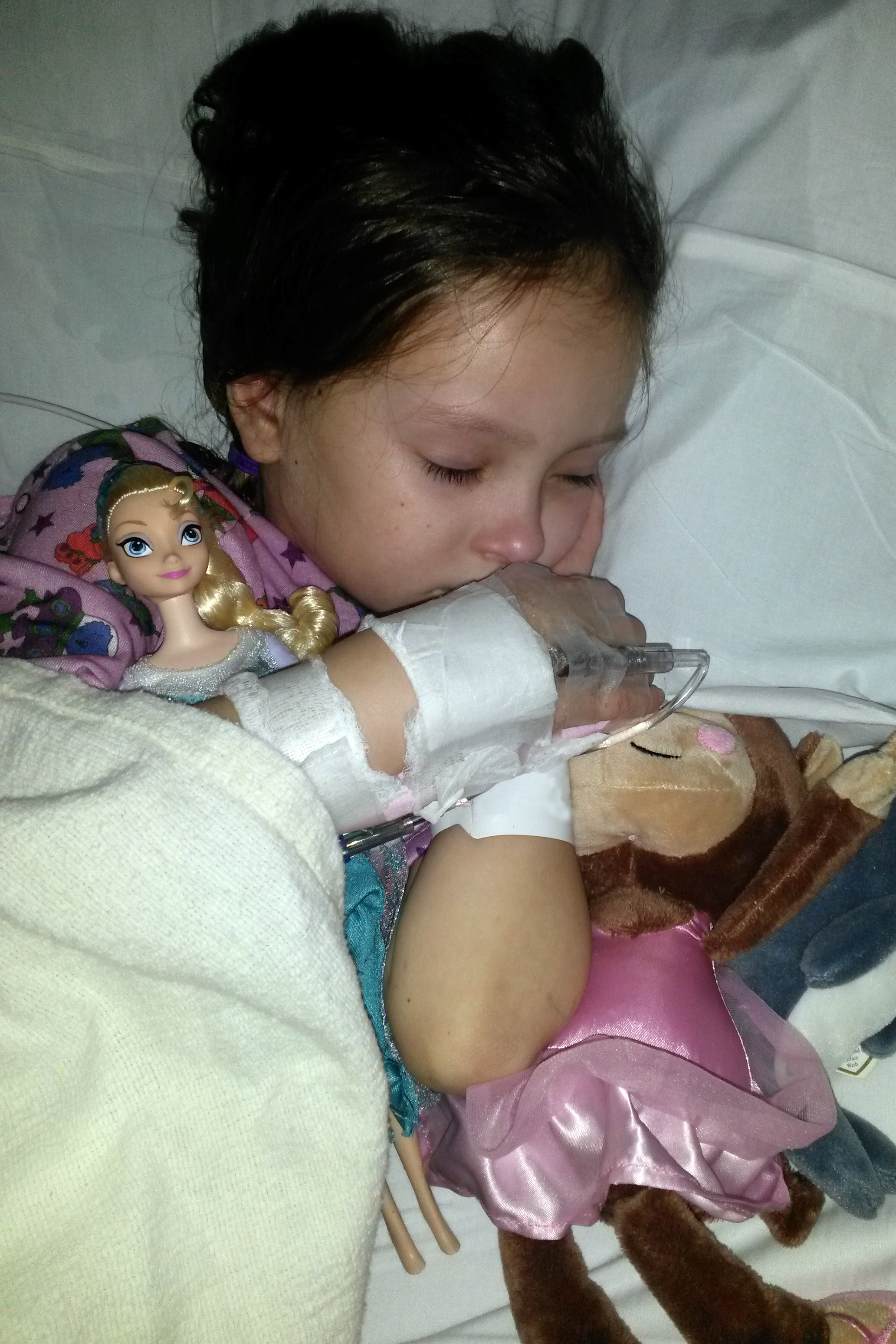 While preparing for Lent this year, one thing I wanted to do was attend daily Mass and Eucharistic Adoration more often. One of my favorite Masses every year is Ash Wednesday, and I was looking forward to continuing the tradition of going. Ash Wednesday morning, two of my daughters came downstairs saying they didn’t feel well. Low-grade fevers and headaches, but they didn’t seem all that sick. I set them up on the couch and went about rearranging the day. Our church had six Masses that day, so I thought it would still not be a problem for everyone who was healthy to make it to church. My mom came over to help on her way to work so that I could transport my oldest from his morning school to his afternoon school. Right as she did, the girls got sicker. By evening it took two of us to keep the toddler away from them and keep their fevers down. We missed Mass.

The girls were getting better by the weekend, and we started the path back to normalcy or so we thought. Monday another daughter was sick. On and off all week we went through one person after another being sick in some capacity. Nothing too terrible or scary, just nonstop.

The following weekend we woke up excited to have a lazy Saturday morning. Everyone seemed healthy for the first time since Lent started. The girls were all ready to spend the day primping and getting ready for their Daddy-Daughter Dance at school that evening. None of them were more excited than Rachel. She had missed last year’s dance and was determined to have a wonderful time being Daddy’s youngest princess. Rachel and Mary made a card for Katie’s birthday which was the following Monday. We went downstairs so that I could exercise, and they could watch a show with me. A few minutes later Rachel said her neck hurt. She was watching the television at a funny angle, and I suggested she go play, thinking if she moved around the kink in her neck would work itself out. Grandma stopped by and offered to run to the store for bobby pins. Mary and Rachel asked to tag along. The day was going along as planned and felt normal, which was a nice change. Maybe we were moving passed the illness phase. The girls and Grandma returned from the store, and Rachel said her tummy hurt. We were only slightly concerned as she had also needed to use the restroom. But then she didn’t want to move because she was also too tired. At this point, I took her temperature. It was just over 100. No dance for her, not that she cared as much as she began feeling sicker.

My husband and I debated about taking her to urgent care. We aren’t usually ones to run to the doctor right away, especially when it seems the sickie probably has a virus. This time felt different. We looked her over and had her comfortable. My instinct was telling me whatever was wrong with her was unusual and serious. The other side of me was saying if we rushed her to urgent care, we would most likely be sent home with a diagnosis of a “viral process” and prescribed fluids and rest. We decided we could do the watchful waiting at home and take her in on Sunday if necessary. We had her cooled down with washcloths and resting. A little while after the other girls left with Daddy for their dance, Rachel woke up and asked me to make the room stop spinning and shaking. She had gone from vibrant five-year old to a really sick tiny girl in a matter of an hour. My mom and I decided to take her to the emergency room as her fever had skyrocketed even with medication.

At the ER, they ran a few tests and had three doctors examine her. The final diagnosis was a viral process, big surprise. We went home again and continued to watch her. On Sunday we split going to church, and I found myself at church alone. One of the readings was the story of Abraham taking Isaac to sacrifice him to the Lord. I got a chill as Rachel and how sick she was came to my mind. I know God doesn’t test our faith, and it spooked me a little that I had these thoughts while I was at church. I shook myself a little to rid my mind of these thoughts. After church we planned to celebrate Katie’s birthday with family. Grandma and Grandpa came over, and her aunts and cousins joined us via webcam. Grandpa discovered that Rachel’s neck had a swollen lymph node. We found a way to make an appointment at her regular doctor Monday morning and watched.

By Monday morning, Bryan and I were pretty sure Rachel would end up admitted to the hospital. She wouldn’t walk and was barely moving. He took the day off work to come to the doctor with me. Sure enough, our pediatrician examined her, called in an associate to also examine her, and made arrangements for us to go straight to the hospital for lab work and a CT scan. Bryan took her into the hospital while I made arrangements for the other children and let Nicholas take a nap in the van. Her white blood cell count was so high that they admitted her even before they had the results from the CT scan. Thus began a completely new experience for us and our family.

For two days we watched and waited as she received strong antibiotics. She was given a diagnosis of cervical lymphadenopathy. We were told it would 4 days of 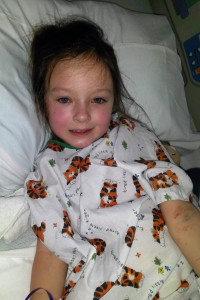 antibiotics before we saw a big improvement. Day two she seemed much better already. We had network of family and friends praying, and we felt confident she would be able to come home very soon. Wednesday morning, she colored with her godmother and had some fun talks with her daddy. Wednesday afternoon, she fell asleep. We thought that maybe her fever was breaking, and she was turning the corner. However, she remained asleep. By evening, she had slept through lunch and dinner and still would barely wake up when people came to visit or check on her. Her fever spiked higher than it had been at any other point, and Bryan and I began comparing notes a little more closely and realized no one had ever come to anoint her. We were at a Catholic hospital, and one of the questions at admission was whether we would like our parish to be contacted and if we would like her to receive the Anointing of the Sick. We had, of course, answered yes. After I had gotten the other children settled at home in the evening, I headed back to the hospital. I was a little panicked as the reading from Sunday kept coming back to my mind. I was texting with friends asking for more prayers, and I called our parish and left a message asking if our pastor could please call in the morning. Almost immediately, our pastor called the hospital floor as he couldn’t understand my phone number, and Bryan’s cell phone wasn’t working. He came over that evening (it was already after 9PM). My panic started to subside. He gently anointed her, explaining each part of this beautiful sacrament and how it came to be.

The next day, the game plan changed. Through more testing, we found Rachel also had Influenza B. Without answers, though, we decided to initiate the transfer to the closest children’s hospital on Friday. My sister, two of my aunts, and my uncle took off work (my mom and dad had already been at our house or the hospital most of the week). They came to help and support. For the weekend, the doctors even at the children’s hospital went back and forth about Rachel’s diagnosis. Our pastor called daily to check on us. 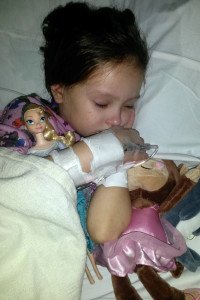 I finally told Bryan about the reading the previous Sunday and my fears. He listened and then said I needed to focus on how the story ends. He told me to stop focusing on Rachel being sick and focus on how God was working around us, through our friends and family. During regular time, I drive to school at least five times each day. Suddenly, all of those pick ups were covered by friends and teachers. Meals were covered. Rides to and from practices and games were covered before we even thought to ask. Family was staying at our house, and the other children, while worried about their sister, were being entertained and well-cared for. Friends, teachers, our principal all came with presents for Rachel. Classes made cards for her. In no way had God left us or Rachel.

Come Monday morning, the infectious disease and general medicine team met to decide on Rachel’s course of action. They had been trying to determine if her symptoms were only caused by the influenza B or if she also had Kawasaki disease. We prayed that God would guide them to the correct diagnoses. In the end, they treated her for Kawasaki as well.

Within hours of the infusion of the medication used to treat Kawasaki, her eyes began to clear and her fever broke. They continued to watch her for 24 hours to make sure she continued to improve. She did, and we were able to go home on a bright, warm Wednesday afternoon. We made it home right before the older children got home from school. What a glorious time!

This illness showed us once again how much we have to be thankful for. Rachel returned to school this past Tuesday, the Tuesday of the Easter Octave. Basically, our Lent this year was one of illness and recuperation, resting, and recentering. It was not the Lent I had planned to have. Once again God showed me how great His love for us is, how He is right there with us, holding us in our suffering, and how He is always faithful to us.

do not be anxious: I am your God.

I will strengthen you, I will help you,

I will uphold you with my victorious right hand.” Isaiah 41:10 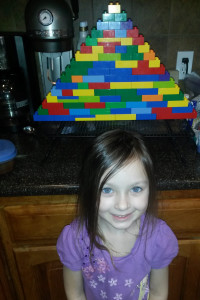 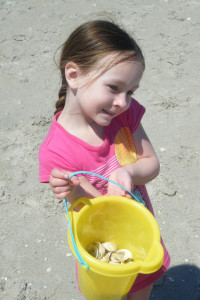 2 Replies to “A Test of Faith”