NOTE: This story was written while the author was still in the midst of her journey to Catholicism. She had not yet embraced the Catholic Church as her true home, so the song reference speaks of her Protestant roots more than her Catholic home. For ease of reference, each Scripture quotation is hyperlinked to a Bible translation site that shows the similarities and differences between various translations – the Douay-Rheims Bible is included in the site’s list.

Some years ago, Richard, my husband, and I lived for ourselves, not for God. We decided 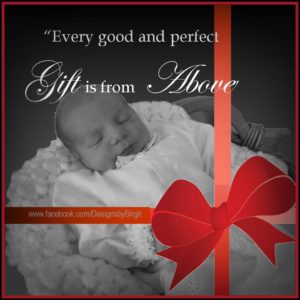 that four boys were enough; Richard should have a vasectomy. Most people think two is enough; we had two ‘extra’! So, we trotted to the doctor to ‘cut off the seed’ of any further children. As the years passed, we moved forward in our lives. God revealed His bigger, completely unexpected plan. Both Richard and I experienced the Saving Grace of Christ. Our lives slowly changed as we began to live a life for Christ and not lives centered around   what “we” wanted or what “we” thought was best. During our (continuing) spiritual transformation, Christ revealed that we had made a big mistake limiting our family. Moved with conviction, tears streamed down my face as I realized that we had robbed ourselves of what our Creator called His reward in Psalm 127:3: more children. WHY? Why would anyone wish to miss out on a reward? We repented and laid our burden upon our Father.

Time passed and God opened doors to change something that seemed unchangeable: Richard’s vasectomy. After praying for Richard to be healed, God provided us with, not only the money, but also a Christian Doctor that offered reversals to men like Richard. The fees were unbelievably reasonable. It reminded me that “with God all things are possible” (Matthew 19:26)! We happily traveled to Oklahoma for Richard’s reversal. Afterwards, we knew it would take time: God’s time. Peace filled us as we placed the outcome in God’s hands; we’d done everything humanly possible. Days began to fly by, then months, then years, but still no baby!
On March 20, 2012, right before I took a pregnancy test, I prayed God would give me a positive. Imagine my surprise, or should I say shock, happiness, and gratefulness, when it was beautifully positive! After our mistake, spiritual awakening, the reversal, years of waiting and praying, God choose to gift us with a baby! My entire body shook; I was standing in a moment I would never forget.  All I could do was praise Him!! I did not know what the next day held, but I knew I had a baby.
Our boys and family had been praying for us, so when we shared the news with them, they were more than elated. So, too, did our church family rejoice. They had walked through many of these milestones with us! I found myself smiling and soaking in all of God’s blessings. We thought of names, daydreamed of the baby’s room, his or her appearance, and really just jumped head first into the moment. After all, we had waited four years for this baby! I tracked each week’s development and posted them on Facebook. I was totally and wholeheartedly in LOVE with God’s gift of life!
BUT… Just a few days shy of my twelfth week (highlighted in bold red on my calendar as the end of the high risk for miscarriage, the first trimester), I began spotting. My body again trembled with shock; I could not believe my eyes. Prayer resounded in my heart. I knew God could heal the sick, raise the dead; and He could, if He willed, save my baby. 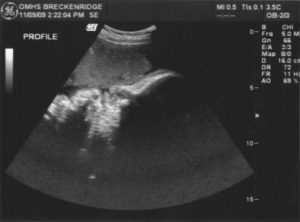 Instead, the bleeding continued. We made an appointment with the doctor. As we drove to the office, I was terrified of the diagnosis. The nurse led us to the ultrasound room. She was kind and told us how she’d spotted during her pregnancy. My hope was that I, too, could say that after this appointment. In no time, the ultrasound picked up our little baby. As the doctor studied the ultrasound, his words seemed to pierce deeper than any knife ever could, “There is no heartbeat.” I was absolutely crushed. As hard as it was, I tried to hold my heartbreak inside. Through sheer will, I made it through the doctor’s last words of advice and then for labwork. At the car, the tears finally poured down my face.
Somehow, I made it home. My oldest son stood in the stairway; his look is forever in my heart. Tears streamed down my youngest son’s face. Our boys were crushed. My sweet husband was devastated as well, but still tried to comfort me. He, too, had desired this life. He, too, was elated. He, too, dreamed of holding this little baby in our arms and kissing those sweet innocent lips.
Why? How? Why would my God allow me to taste the sweetness of life within me only to take it away? How could He do this knowing that we so wanted to hold, kiss, and love His gift? So many things ran through my mind. I went through a stage of anger, anger at my Heavenly Father for allowing this. Then, I almost drove myself crazy wondering: was God punishing us for our past sins? Late one night, I had a heavy overwhelming feeling. As I lay to rest, a thought crossed my mind, “Is this the mourning that God feels when innocent life is taken, especially through abortion?” The thought was heavy. With pure exhaustion, I quickly fell asleep.
The alarm clock woke me early the next morning and, before my eyes were even open, I still felt the exhaustion of the last few days. As I laid there, not wanting to move, I truly believe God spoke to me. He finished His revelation from the night before. When we had cut off the fruit of the womb, His heart had mourned. This is what He felt when we thought we knew better than Him. His words pierced my heart! This is how He feels when a woman ends the life of her child. In an instant, I began to mourn not just this baby, but all the babies we had stolen from ourselves. Our “quiver” might have been “full” (Psalm 127:5) had we not let the desires of ourselves deceive us. As the process continued, I felt as if I could feel the pierced hands of Christ. I felt a small part of what our Savior endured when He let the wrath of God fall on Him, the sins of the WORLD upon His shoulders.
Please, let me be clear; I do not believe the Lord was punishing us. Instead, I believe God used this heartbreak as a tool for growth in our lives. He let me feel a pain that only comes from a loss, in order to let me connect to what He feels for each of His creations. This struggle revealed His Sacred Heart in a way I could grasp. Our loss showed His nature and His works if we just surrender all areas of our lives to Him. In my heart I heard, “Living He loved me, dying He saved me, buried He carried my sins far away, rising He justified freely FOREVER” (Casting Crowns Glorious Day)! I knew we’d been forgiven and that Christ died for us. The weight of my own sin has no comparison to the weight of the sins of the world. This knowledge was given out of a great Love that only the Father can show.
If, one day, more “olive shoots” of our vine surround our table, I will bless 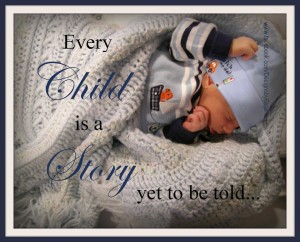 the name of the Lord. I will bless the name of the Lord when our home remains full of our “olive shoots” (Psalm 128:3), our children.  We named our baby Hope. Hope was buried under the mighty oak tree in our yard. We continue to nurture our sons in faith and love to one day be re-united with Hope in Heaven. I now rest knowing that God is in control and he is my strength (Isaiah 40:31).
Loading Comments...