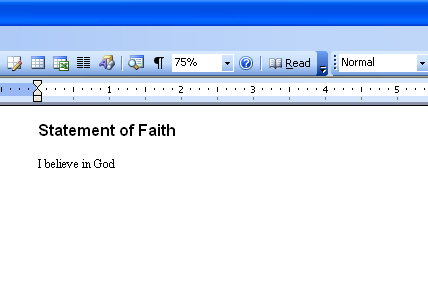 I noticed a staple amongst non-Catholic Christian blogs, group websites and church websites that is completely missing from their Catholic counterparts – a Statement of Faith.

Visit any non-Catholic Christian site, and look around, usually in the About section, and you’ll find a Statement of Faith.  These statements vary in length and detail, and no two are exactly alike.  In a few short, well worded paragraphs, R.C. Sproul’s Ligonier Ministries’ Statement of Faith covers the Blessed Trinity, Sacred Scripture, and some Calvinist doctrine.  By contrast, CARM (Christian Apologetics and Research Ministry) has a twenty nine point statement of faith getting into good details like the rapture and heresy.

Now, visit Catholic blogs and websites.  In the About section you will see nothing like this.  No list of personalized beliefs, no definitions of religious terms for clarification of exactly what the authors believe.  Instead, there will be a quick reference to the Magisterium, the Holy See, or maybe just the mention of the word “Catholic” (with no ifs, ands or buts).

Not long ago, Catholic Sistas received an email from a well meaning man enlightening us to his new “Catholic” church.  Yet, he wasn’t simply establishing a new parish down the street with the permission of his bishop.  Instead, he was revamping Catholic teaching, sending us a list of eleven items in which his “Catholic” church would be different than the Roman Catholic Church.  One of the first items listed was that his church was not submissive to Vatican teaching… naturally resulting in a faith that was no longer Catholic.  This “Catholic” man spent many more words and much more effort explaining his faith than say, us at Catholic Sistas, where our about section sums up our faith in, “We strive to always be mindful of Mother Church and our adherence to Her.”

Devout Catholics have no need for a unique confessional statement.  A devout Catholic (and their websites), need only mention adherence to the Church in one simple sentence and everything is said.  This highlights the single biggest difference between Catholic Christianity and other traditions.  In Catholicism, our statement of faith does not begin with us, and it is not about what we have determined to be true.  In Catholicism, truth is not discerned by the individual, it is instead taught to the individual.  Even the Pope submits wholly to the faith he was taught.  He has no power to change or deny what was handed down to him.  Believing as a Catholic is about agreeing in what we say (St. Paul 1 Cor 1:10) by remaining faithful to what we have learned and believed because we know from whom we learned it (St. Paul 2 Tim 3:14), as the Church is the pillar and foundation of Truth (St. Paul 1 Tim 3:15).

When a Catholic reads the Early Church Fathers, or the writings of any saint over the last 2,000 years, he finds what that early Christian wrote is the same faith that has been handed down to him.  By contrast, a child of Christ nurtured by the traditions of the Reformation would read the same writings, and identify some of his own faith, yet will not be able to agree with everything confessed by the early Christian.  For instance, the Protestant might identify with St. Augustine’s writings on grace, yet might find him quite wayward in his teachings on the Eucharist or submission to the Catholic Church.  And this brings us back to the need for Statements of Faith.

With no visible head to point to for a unity in faith, the non-Catholic is left with penning his unique confessional statement in order to identify his beliefs amongst the choices floating out there.  Perhaps some really could point to a particular source, say R.C.Sproul, because they do agree with everything he teaches, yet, I’ve almost never seen anyone express their faith so succinctly (exceptions mentioned below).

Meanwhile, when a Catholic confesses to adhering to the Magisterium, what that Catholic admits submitting to is best expressed in the Catechism of the Catholic Church.  This statement of faith is far more than a few well-worded paragraphs.  It is 900 pages of explicit teaching on all things of faith and morals covered in a lovely shade of hunter green.  The Catechism is divided into four parts:

The Profession of Faith explains the Catholic faith within the lines of the Apostles’ Creed in great detail over the course of 270 pages.  Next, the Catechism explains the Sacramental life of the Church, fully detailing each of the seven Sacraments and their application in the Christian life.  The third part of the Catechism expounds upon vocations, social justice, grace and justification and fully dives into each of the Ten Commandments.  Lastly, the Catechism speaks thoroughly for 70 pages of a Christian’s best spiritual weapon, prayer.

You can find the entire Catholic Catechism online through the Vatican’s website: http://www.vatican.va/archive/ENG0015/_INDEX.HTM

I would like to note there are other ecclesiastical bodies whom take a similar approach to the transmission of faith.  For instance, I’ve seen Anglican churches and dioceses wrap up their statements of faith in a simple mention of being subject to the See of Canterbury, and I imagine orthodox communities might also specify being subject to a particular regional bishop.  A Christian’s statement of faith, whether it is unique or whether it points to a particular teacher, speaks volumes to how that Christian believes God’s Truth is revealed, is it individually discerned, or is it universally taught?

Jesus to his Apostles after His Resurrection in 33 A.D.

“The eleven disciples went to Galilee, to the mountain to which Jesus had ordered them. When they saw him, they worshiped, but they doubted.  Then Jesus approached and said to them, ‘All power in heaven and on earth has been given to me.  Go, therefore, and make disciples of all nations, baptizing them in the name of the Father, and of the Son, and of the holy Spirit, teaching them to observe all that I have commanded you.  And behold, I am with you always, until the end of the age.’” (Matt 28:16-20)

St. Paul to the Thessalonians in 50 A.D.

“Therefore, brothers, stand firm and hold fast to the traditions that you were taught, either by an oral statement or by a letter of ours.”  (2 Thess 2:15)

“But you, remain faithful to what you have learned and believed, because you know from whom you learned it, and that from infancy you have known [the] sacred scriptures, which are capable of giving you wisdom for salvation through faith in Christ Jesus.”  (2 Tim 3:14-15)

St. Augustine on the Catholic Church:

“We must hold to the Christian religion and to communication in her Church, which is catholic and which is called Catholic not only by her own members but even by all her enemies.  For when heretics or the adherents of schisms talk about her, not among themselves but with strangers, willy-nilly they call her nothing else but Catholic.  For they will not be understood unless they distinguish her by this name that whole world employs in her regard.” The True Religion, A.D. 390

(about why he is Catholic) “The succession of priests keeps me, beginning from the very seat of the apostle Peter, to whom the Lord, after his Resurrection, gave it in charge to feed his sheep, down to the present episcopate.  And so, lastly, does the name itself of Catholic, which, not without reason, amid so many heresies, the Church has thus retained; so that, though all heretics wish to be called Catholics, yet when a stranger asks where the Catholic Church meets, no heretic will venture to point to his own chapel or house.  … no one shall move me from the faith that binds my mind with ties so many and so strong to the Christian religion.”  Against the Letter of Mani “The Foundation”, A.D. 397