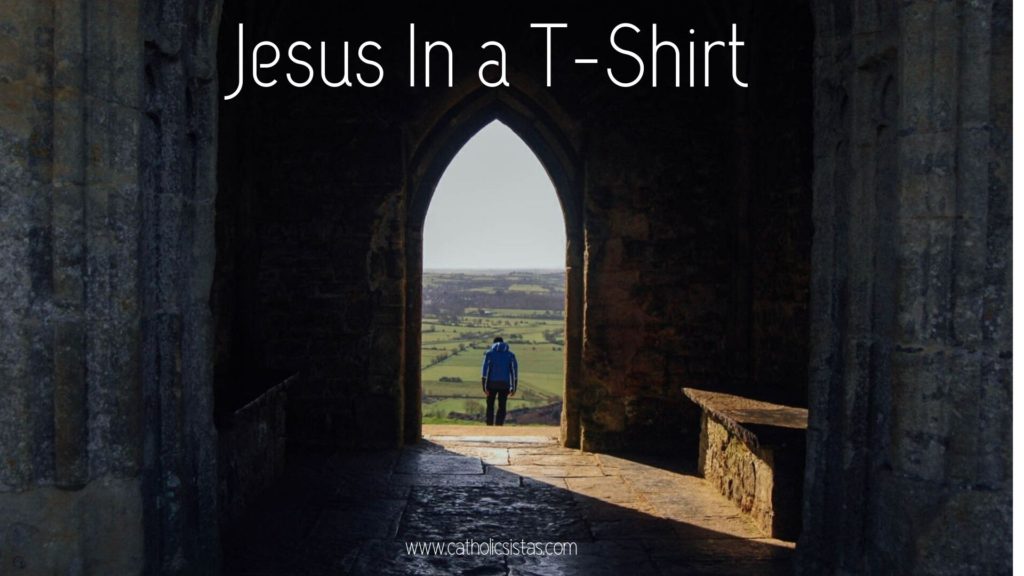 I love being Christian. I love the peace that it brings. I love what the Church stands for. I love the history it holds. I love how it’s timeless, pulls out the best in people when fully embraced, and makes all things new.

Sometimes Jesus feels so far away, though. He seems more like a distant figure, sitting in a robe on a cloud, who couldn’t be more removed from the twenty-first century and all of its problems than a loving companion or friend.

I am guilty of falling into the lifeless routine of going to Mass, reading the Bible, and reciting my prayers all out of habit, obligation, or (dare I say) necessity than out of love or friendship with him.

I forget that Jesus was a man. A real life, flesh and blood person who walked the same earth that we are on now, facing many of the same types of people, problems, and circumstances. I forget that he was fully God AND fully man.

In an effort to embrace this idea more completely, I’ve been spending time meditating on the idea of Jesus as a real man who wants to know me personally. What would I say to a friend if I were sitting on a park bench next to him? What if I hadn’t seen him in a while or I had hurt him recently? How might my prayers be different than they are now?

Even then, it can still be difficult to wholeheartedly accept this idea of Jesus being a relatable person. After all, he didn’t dress like we do now. He didn’t drive or have social media. Heck, we don’t even know with certainty what he looked like—spoiler, he probably wasn’t blond-haired and blue-eyed. But to the people of his time, he appeared to be an average guy, nothing special at all. He wasn’t rich, he didn’t have an important job or a well-to-do family. He was just average.

With that in mind, I try to imagine if he lived in 2019 and was just an everyday man, like my husband or brothers-in-law or friends. How weird it is to consider that he would probably dress like most people do now, in jeans and a t-shirt. He could have a beard, but maybe not, long hair or short. He’d have neighbors and friends and customers and maybe even co-workers he’d work alongside.

It seems like such a ridiculous revelation, but it’s not revolutionary at all. Jesus did have all of these things. To the people of his time, he was just like anyone else, which is what makes it even more extraordinary that he turned out to be who he said he was: the Son of God.

In this simple epiphany, so much spiritual growth and peace are held. When I am able to remember who Jesus truly was and is, my prayers are more heartfelt, sincere, and powerful. It’s easier to open up to him about the most mundane concerns in my mind or share with him even the smallest joys of my day. The obligatory prayers melt away, replaced with honest conversation and an actual relationship is fostered.

Just as with any relationship, though, it requires time and effort for it to develop and thrive. When I feel myself slipping into a spiritual dryness where the Lord becomes more of a figure than a friend, I imagine myself sitting right there on that park bench next to Jesus in a t-shirt. The guy who fished with his friends and got tired after long days. The guy who cried when people died and went to weddings with his family. The guy who had a mom and a job and feelings. Who lived centuries ago, but who knows what it means to be human as much as anyone else and not only wants to share it with each one of us, but wants even more to save us from it. To make us holy.

That’s the guy I want to know. The guy in the t-shirt.

Every day when the mail comes my kids argue about who is going to run out to get it. Just as I did as a child, they love the job. As the victor of the mail retrieval argument brings in the mail, he or she flips through it to see whose names are included on the letters. Not finding their own, they sigh heavily and hand me the mail saying, “Mama, it’s all for you.”

Of course they simply see a stack of mail with my name on it and think I should be overjoyed to be getting so much mail. Little do they realize that it’s always bills and a whole lot of junk too; not things I truly want to open. While I occasionally get a letter from a dear Sister friend whom I met in Cincinnati at the Franciscan Sisters of the Poor, it is rare these days that I get anything that I look forward to in the mail.

But a couple weeks ago all that changed. I was contacted by CatholicTShirtClub.com and asked if I might want to review one of their monthly subscription boxes. Friends, I’m not a person who passes up a free t-shirt, especially a free CATHOLIC t-shirt, and I love getting mail that is not bills, and so I sent on my address and waited patiently for it to arrive.

It didn’t take long for my box to get here. One day a week later the victor of the daily mail retrieval argument rushed inside, a box firmly in her hand held high above her head, yelling, “Mama! Mama! Guess what? You got a box!” To say the excitement at our house was palpable would be an understatement. Taking the box into the kitchen I’m pretty sure I had 7 of my 11 kids gathered around me waiting for me open this unexpected treasure that the post man had so kindly delivered.

As I opened the box I was so thrilled at what I found inside. Lately I have had a very strong pull from God to get to know and understand the Divine Mercy better and my pen pal Sister Clarita from the Franciscan Sisters of the Poor had introduced me to and encouraged me in this devotion. Imagine my surprise when this month’s theme was exactly that- The Divine Mercy! Everything included tied in together and was focused on helping me to not only understand but love the Divine Mercy. God sure works in amazing ways!

The first thing I pulled out was the t-shirt. It was nicely made- the material is heavy and the graphics are well thought out and look great on the shirt. AND it looked like it would fit me perfectly (which is always something I worry about if I order something online, but the size was true!) My experience was going great so far! 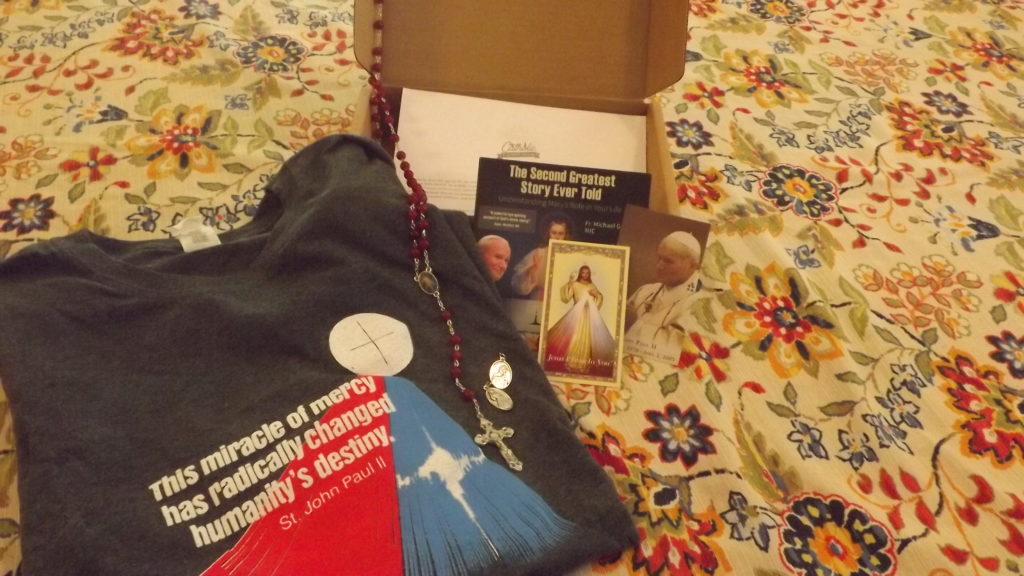 But the box doesn’t only include a t-shirt (although you can order a subscription that has simply a t-shirt if you so desire). There were more goodies! Also included in my box was a gorgeous rosary that is specially made to be able to say the Divine Mercy Chaplet (or the normal rosary if you wish), two medals- one of Pope John Paul II and the second was the Divine Mercy image, two prayer cards, a bonus gift of Fr. Gaitley’s talk “The Second Greatest Story Ever Told”, and a reflection on what the Divine Mercy is, how it came about, and why we should incorporate it into our lives. Finally, the Catholic T-shirt Club also tells us why each item is included in our box and how it relates to our lives. 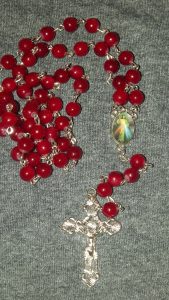 Seriously, getting this box in the mail was like Christmas morning for me! Not only did it make me happy to not have only bills to open, but it was such a wonderful feeling having these amazing reminders of my Catholic faith coming straight to my doorstep. I loved seeing my children’s faces as I pulled out each of the goodies that were included in the box. They were just as excited about them as I was and we all know how important it is to have our children excited about their faith!

CatholicTshirtClub.com not only has boxes for adults (and they have three different subscription levels to choose from), but they also have subscription boxes for kids! As I checked out their website I was thrilled to see how they hope to inspire all people in their faith. Their monthly subscriptions are a fun way to do just that.

If you are looking for a fun way to encourage your faith, if you love showing your Catholic faith through awesome t-shirts, and you simply love getting faith-inspiring things in the mail, then I have to suggest you try out the monthly t-shirt subscription at CatholicTshirtClub.com I really think you will love it!

Want to learn more? Go here to check out their website, to have your questions answered, and to sign up!

*I received this box for free in return for my honest assessment of this product. I honestly think you should try it out!