“1000 concerts is a big number in any artist’s life” states the press release about our milestone concert happening on October 26th in Cincinnati, OH.

As I prepare the music and the narratives for the performance and give promotional interviews, I think about one huge aspect of this accomplishment that easily gets overlooked:

Mothering through 1,000 concerts and 13 years on the road.

My husband Matthew and I raised our three sons Dante (13), Evan (11) and Blais (8) while traveling around America, with music dedicated to inspire, engage and encourage people to believe.

Singing was the easy part. I was well trained, had great mentors/teachers and many years of experience, as I started performing at the age of four.

Motherhood on the other hand… “It’s the most amazing, but hardest jobs of all’, my own mother would say to me when I was growing up in the old country Croatia.

From the moment I knew I was going to have a baby, I attempted to prepare myself for motherhood, getting my hands on all available resources: reading, studying and researching. But with mothering, there aren’t any tech or dress rehearsals available. The moment it begins, you are in the spotlight.

When life is stable, home and finances secured (and your own mother is living within a walking distance), even then, it’s a role no one can truly prepare for. It’s a role that doesn’t even come with a script, and yet, it’s the role that’s very much responsible for the other characters (our kids).

But being a mother, on the road, pregnant, with nursing infants, toddlers, one, two, three at the time… is something I wasn’t even finding a lot of resources for. I tried reading about other ‘famous moms’ (who travelled with their children), but was reminded that, although I had the status of a superstar, I gave up all the luxuries and support systems that come with it.  I had never met another mother who had attempted the same thing, so the best advice I would get from other moms around the country was an honest and sympathetic: “I don’t know how you do it”.

I would respond: “I don’t. We do,” giving a full credit to my husband Matthew who has been the world’s ‘champion Dad’, has provided tremendous support and done everything in his power to create an environment in which I could both sing, and focus on my kids. If travelling and affecting people wasn’t his passion as well as mine, I would have had a long pause in my career and stayed home until the youngest kid was big enough to not need me constantly (college age?).

Mothering on the road was unusual, adventurous, rich with magical moments, and at times, very hard.  It shaped my spiritual journey and influenced my concerts and music in many ways. I didn’t just sing my songs, I prayed them – most often praying for my children and whatever we were going through.

I took these thirteen years as an opportunity to let my children teach me, and help me to get closer to God.  I wasn’t focused on building my career but on surrendering and learning to say “Let it Be“.  As I look at my body of work and those 1,000 concerts, all I can claim is a journey of love and faith, at times victorious, at times broken, but always completely honest.

Because of the fact that we were doing everything ourselves (from booking the concerts to making promotional materials, producing the music, providing sound and light equipment, driving, setting up, tearing down and doing all the administrative, back-line work) I was fulfilling many more roles than that of a performer and a mother. Too many to list here… (even on LinkedIn they make me look way too A.D.D.). 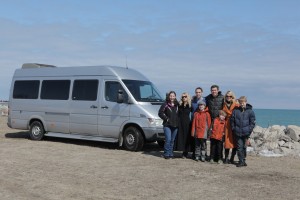 So, there were things that I simply didn’t do – like taking my kids to soccer practices, decorating my house, or gardening – I attempted them, but mostly I gave them up to leave room for things that I didn’t want to sacrifice: like home-made meals we ate together (during the months we were home) and family movie nights.

But even during those years, I never lost the sense of gratitude for being a mother and having these amazing lives entrusted to my care. I wish I took more pictures. And I wish that I had a little elf who would organize those pictures into albums, store the digital files in ways that actually makes sense, and make prints regularly.  And there are thousands of images that tell thousands of happy moments scattered across the Great Plains, on either side of the Rocky Mountains, from Sea to shining Sea.

They built snowmen in a different part of this enormous country every winter; hid in the tall grass in front of a sod house somewhere in the middle of North Dakota; grew to like New York bagels as much as LA’s ‘mango on the stick’, Chicago’s hot dogs, and Kentucky BBQ ribs. Maybe I wasn’t taking my kids to the soccer practices, but they got to see America through their own eyes.

The hard parts were finding Urgent Care offices open in the middle of the night; beginning a long ride with a baby who was running a fever; cancelling the only one out of 1,000 concerts because our baby Blais was in the hospital with blood in his stool – which then turned to be intolerance to the lactose in my breast milk (after which I traveled around the country, performing five nights in a row, with two days off, for weeks at the time, on a strict non-dairy diet – and I mean, no-whey-in-bread strict – which pretty much cancels all fast food travel road that sometimes kept us ‘alive’ during the long night rides).

The harder parts were snow and rain storms we drove through, with me clutching my babies close to me, praying as hard as I could, that God and His angels would keep us safe.

Even harder was watching them cry for me, with their little hands stretched out toward me, as I had to begin a concert, be completely and utterly present – because in my concerts, there was no hiding. There was me and my music. Honest and completely surrendered. 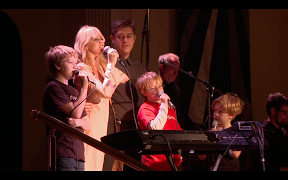 Many nights, I would nurse the babies till the moment I would have to walk up to the stage – and somewhere in the middle, my husband, who would have just introduced me, would walk the other way so I could pass him the baby (he would have just enough time to clear the church door before the baby would realize he was not attached to me any more and start wailing…)

Every once in awhile, I’d let them stay under my keyboard during the concert. I couldn’t bear the thought of them crying somewhere in the basement of the church with Matthew.

From the moment they could crawl on their own and hold a microphone in their hands, they began to sing with me the closing song: “I do believe”. 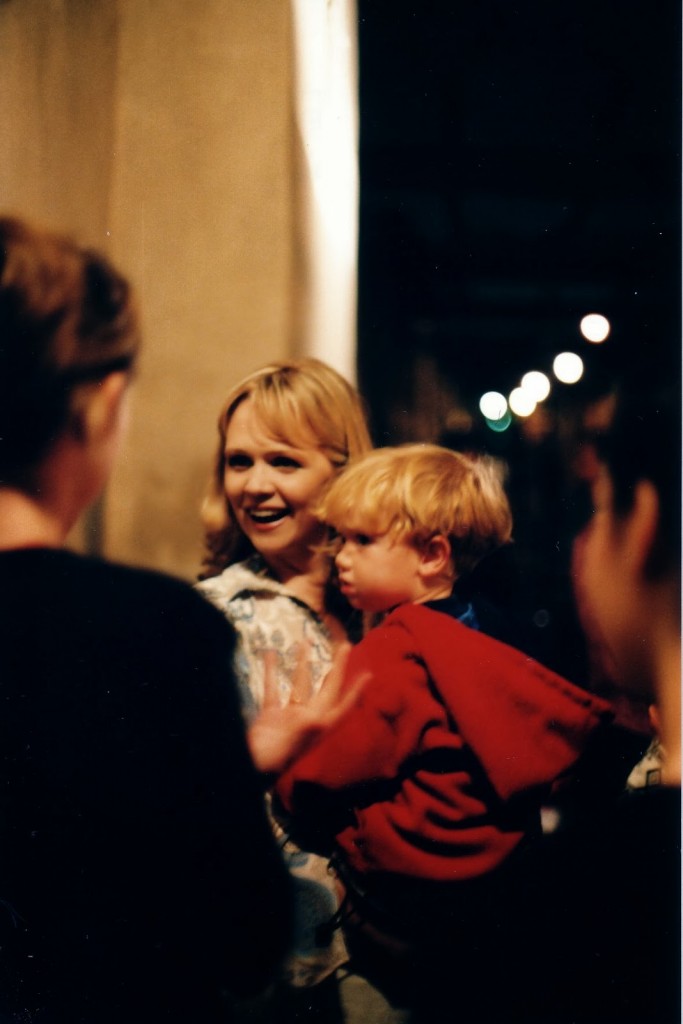 We did homework on the road, on dining room tables in our hosts’ houses and in parish offices, packing and unpacking the school supplies a million times (there aren’t any ‘organizational’ tips in parenting magazines for ‘road-schooling’). After years of adjusting our tours so the kids could be in school Monday through Thursday and only miss one day of school per week (and an amazingly flexible Catholic School and teachers), we decided to homeschool them. The drives had become too long and we finally tired ourselves out.

These days the kids are doing great – excelling in school, they all play instruments well and they are tremendously well-adjusted kids. They still come up at the end of each concert. Our voices are much stronger as we sing in three part harmonies in the song that still brings the audiences to their feet: “I believe, I believe, I do believe.”

But, it’s time for a change. 1,000 (almost all of them free) concerts and long touring seasons are behind us.  As I begin to travel more by myself to perform, I face a challenge that makes all those ‘hard’ baby and toddler years seem as comforting as a “Berenstein Bears” story.  A challenge that comes with even bigger lump in my throat and heaviness in my chest as I get on that flight and text my husband: “Taking off. Kiss my boys. I love you.”

Motherhood – truly, the most beautiful and the hardest jobs of all.

Listen to Tajci’s “Songs for Moms” Playlist here or on: ReverbNation

::Tajci Cameron is a singer/ songwriter and inspirational performing artist. She currently lives in Cincinnati, OH with her husband Matthew and their three sons Dante, Evan and Blais. More about Tajci at Tajci.net and iDoBelieve.com::