Earlier today I was driving down the road listening to my local Catholic station. Every so often a popular rock station would bleed in and cover the beautiful sounds of a Mass with Fr. Mitch Pacwa. Talk about Mass confusion***! I couldn’t seem to help myself, even as I listened to him intone the words of Consecration, from singing along with the popular rock songs. As I caught myself doing so, time and time again, I was reminded that this is somewhat “normal” for me and many other Catholics, Christians, and/or any faithful throughout our faith-lives to be so easily distracted by secular things.

On a basic level, this distraction has roots in Satan. The more concentrated we become on God, the more frustrated Satan is. So, in an effort to separate us from God, Satan throws little distractions at us. Physically, my Mass confusion was caused by two local radio stations sharing the same frequency; however, spiritually, each time I sang the words to a popular rock song instead of staying focused on the Mass, Satan was winning. Of course, this makes me wonder if perhaps God also uses the physical effects of a Catholic station sharing the frequency with a popular rock station to gain followers from the crowd of rockers.

Even through my Mass confusion I began to wonder about other things that distract us from the beauty of Mass and therefore from God: liturgical abuses**. Recently, my mother and I were discussing various experiences we’ve had on vacations with local Masses. She recounted one particular Mass, where the Eucharist was basically reduced to ‘chips and dip’, from which my whole family emerged silent and disturbed. 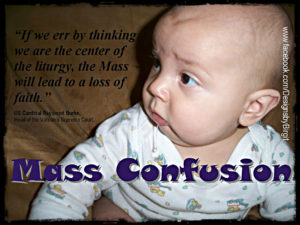 We were hours from our home with three children in the car, yet none of us spoke on the way home. I remembered another experience where we spent the entire Mass trying to find anything familiar besides some of the words – the Tabernacle was nowhere to be seen, the Crucifix was MIA, rubric defined words of Consecration were changed, and the layout of the church itself was in the round. We had other experiences with fewer abuses as well. Locally, we have a diverse celebration of Mass as well, but no where near the levels experienced outside our home area. Such Mass confusion dilutes the Word of God, Jesus, to our image of Him instead of transforming us into the Image of Him.

Some seem to thrive on Mass confusion in an effort to be more tolerant, entertaining, diverse, etc. Often, those faithful to the rubrics and to both ‘t’ and ‘T’ traditions are accused of being “rubric-Nazis”, “holier-than-thou”, “intolerant”, “behind the times”, and “divisive”. Yet Scripture tells us to stay faithful to the traditions given to us by Jesus and the Apostles as well as to avoid leading others astray. God is the ultimate in constancy whereas Satan is ever changing to tempt us away from God. Yes, we are called to be welcoming and universal, but we don’t do that by abandoning 2000 years of traditions and making Mass less about God and more about ourselves. Just as I experienced Mass confusion with my radio stations blending with one another, we all experience Mass confusion when we try to bend Mass to secular understanding. 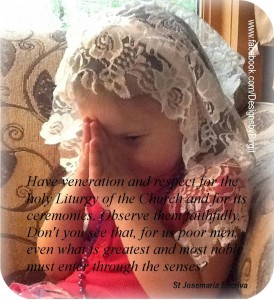 There are many questions in my mind — that I’m unsure how answer. Have any of these changes to the Mass increased vocations, faithfulness, tolerance, holiness, etc?  When we knowingly participate in a less-than-stellar Mass (according to rubrics & Tradition) do we still gain the graces given to us through Mass? By knowingly (for convenience-sake*) choosing a Mass where there is less adherence to the rubrics and Tradition, am I putting my soul at stake or am I just exposing myself to disdain (since I veil in the presence of the Blessed Sacrament) and Mass confusion? Do I mitigate whatever harm going to a confused Mass because I chose to do so based on getting my reluctant Catholic husband to Mass? Or do I add to the harm (to my soul and perhaps his) by exposing him to Mass confusion?

* Obviously, when we only have one option available for Mass, whether on vacation or due to lack of churches, we are filled with all the graces available from Mass. However, in my area, we have many available options for Mass. I live 20 miles outside of the nearest ‘big’ town, yet there are 3 Catholic churches with different pastors within 2 miles of my home. If I were to drive all the way to town I’d add at least another dozen Catholic churches to the list of available options.

*** As I was writing this post I was completely unaware of a book published with this same title about liturgical abuses.