We have a recipe in our family, it’s called pasta with stuff.

Clue’s in the name. It’s pasta with whatever stuff you have in the cupboard or fridge. There’s always a tin of tomatoes, so that goes in first, with some leftover veg (onion, carrot, spinach, pretty much anything can get thrown in there). Some meat, if it needs using up, or a tin of tuna. Olives, if I’m feeling fancy and they’re there; same goes for capers. Let it all bubble together in a pan whilst the pasta cooks, stir together, and you’re sorted. Bonus points if there’s some cheese in the fridge to sprinkle on top.

It’s not glamorous, but it’s cheap, easy, and on the table quickly. Best of all, I can use what we already have, which means I don’t have to go shopping. Win. When I’m busy, tired, ill, or just plain lazy, we have pasta with stuff.

But I always feel a slight twinge of guilt when putting pasta with stuff on the table. It’s not exciting or fancy, it really is the bare minimum required to be called cooking. Usually, I enjoy cooking – it’s my love language, the way I show my husband, family and friends that I care about them, as well as my creative outlet and general relaxation time. Serving pasta with stuff, the very laziest of meals, seems like a cheap getout, like I’m offering the diners the very least of what I can do.

So when my husband asked what was for supper a few weeks ago, I admitted rather apologetically that it would be, “Pasta with stuff.”

To my intense surprise, his face lit up. “Ooh! My favourite!”

I was baffled. I had spent hours fretting that pasta with stuff wouldn’t be good enough, that he deserved something much more elaborate. I couldn’t justify not doing something bigger; after all, I had been at home all day. But sure enough, when suppertime came round he was just as excited for a plate of pasta with stuff as he would have been for any three-course fancy meal I could have placed in front of him.

How often do we waste our worries on things that those that love us most care about the least? Those extra few pounds you grimace at in the mirror is exactly what your children love when they come for a cuddle. Those lines around your lips that you hate reminds your husband of many hours spent laughing, smiling, sharing jokes and cuddles.

Those prayers offered up, muttered quickly or half-asleep because you were so busy cleaning up messes all day, might be the ones God loves most. They’re offered from the heart, and mean as much as a perfectly sung Angelus. Offering our best doesn’t mean being perfect; it means being imperfect, acknowledging our flaws, and doing what we can anyway. And we need to trust in God – and God’s people around us – that we will be loved, not in spite of our flaws, but because of them.

God sees the good in all of us. He sees the beauty in our scars, our exhaustion, our frequent stumbles. He doesn’t merely overlook them, he cherishes them as what makes us each unique children of His.

And at the end of the day, I think that God enjoys pasta with stuff as much as he does a lobster bisque followed by steak and chocolate cheesecake.

Pasta, any shape, enough for however many you’re cooking for

Tinned tomatoes – one tin serves around 3-4 people, depending on how much other ‘stuff’ you’re adding

Vegetables – whatever you have in the fridge. Carrot, mushrooms, and spinach are some of my favourites in this dish.

Optional: meat, such as bacon, chorizo or ham; sausages; minced beef; alternatively prawns or tinned tuna if you prefer fish

2.       Chop the onion and fry it in a little oil, butter, or spray until soft. Chop the rest of the vegetables and add to the pan.

6.       Add any extras that you’d like – including the wine! Allow to bubble, stirring regularly.

7.       Season the sauce with salt and pepper to taste, and add the crushed garlic.

9.       Drain the pasta, add the sauce and serve with parmesan cheese.

If you give this a go yourself, let me know what ingredients you added! I’d love to know if you went more adventurous than me, or tried some completely new flavours. 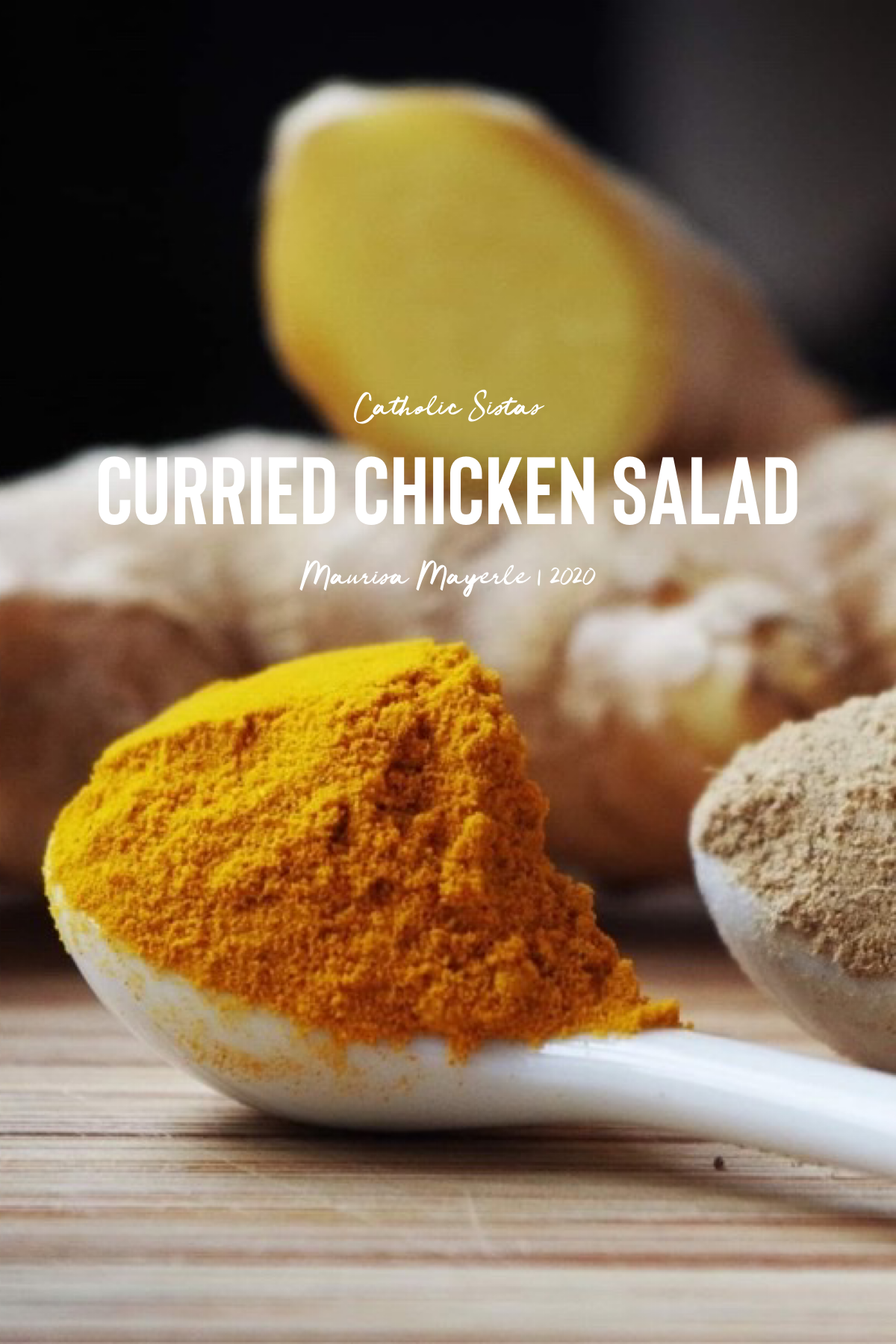 The last several months have taken a toll on all of us and has left many of us feeling a bit helpless. While the world rages on one thing we can do is turn inward and minister to our families. We can make our homes a safe and peaceful harbor. When I’m having a particularly difficult time in my life I turn to creative cooking as a positive outlet and as a way of nourishing my family–body and soul. One of our favorite summer meals is a simple chicken salad. Recently I’ve experimented with my tried and true recipe and given it a fresh and spicy twist by adding fried curry spices to the dressing. The result is quite lovely and a big hit with my family.

Salt and pepper to taste

Preheat oven to 375 degrees. Season chicken breasts with salt and pepper and bake for one hour or until the internal temperature reaches 165 degrees. Remove and rest until cool enough to handle. Remove skin and bones and discard. Cut breast meat into 1/2 inch chunks and place in a large bowl. Refrigerate while the dressing is being made.

In a small skillet melt coconut oil over medium high heat. Add shallots along with 1/2 teaspoon of salt and sauté about 5 minutes until soft and golden brown. Add garlic and ginger and sauté for about 30 seconds. Reduce the heat to medium and add the remaining spices. Sauté and stir an additional 2 to 3 minutes until fragrant and sizzling. Remove from heat and spoon into a small bowl. Allow to cool for at least 15 minutes. Add mayonnaise, lemon juice and stir together. Pour dressing over cooled chicken and stir, adding salt and pepper to taste. Chill for at least an hour, allowing the flavors to meld. Serve over a bed of greens and garnish with halved grapes, diced apple, pistachios, and crumbled goat cheese. 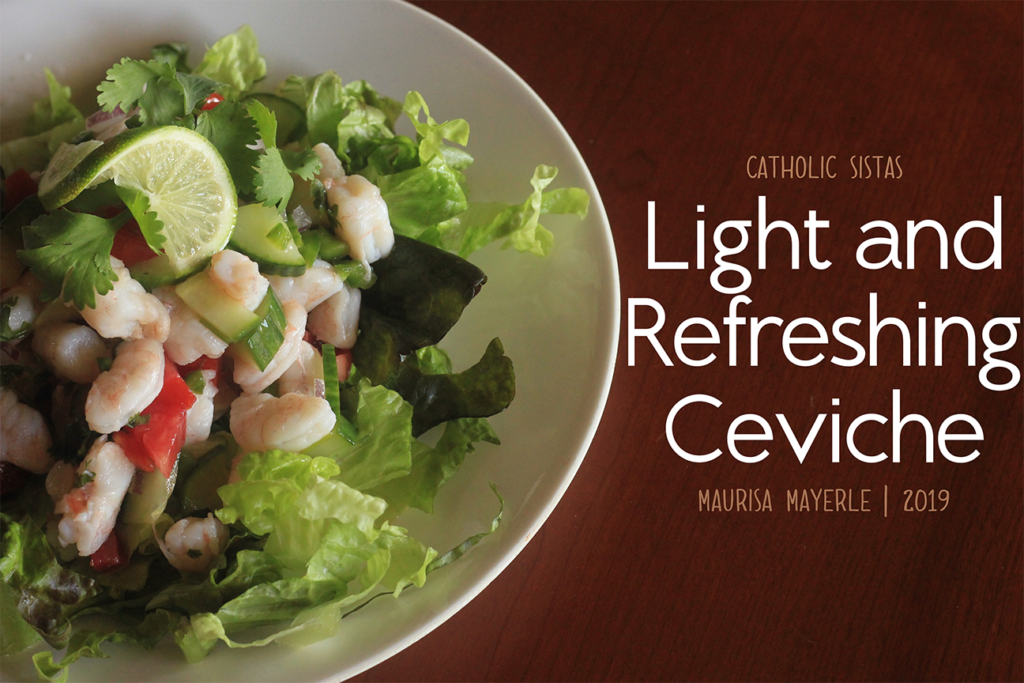 I regularly participate in the Catholic Sistas’ “What’s for Dinner” daily post on Facebook. Recently, I posted a comment stating our dinner that evening would be ceviche. Another poster wanted to know what ceviche was and I explained quickly in response and then decided to post the entire recipe here.

Ceviche is a seafood dish in which small pieces of raw fish are cured in citrus juice, thus “cooking” the fish. This dish is quick, easy, refreshing, and even our eight year old will devour it. It has become one of our favorite summer Friday meals. We usually serve this dish over a bed of greens with chips and salsa on the side. Sweet, cold, juicy slices of watermelon round out the meal quite nicely.

Place shrimp into a large bowl and cover with lime juice and let sit, stirring occasionally for 10-20 minutes to “cook”. The shrimp will become firm and opaque as it cures. Add the remaining ingredients and toss to combine. Ceviche can be served immediately, or refrigerated for a few hours and served chilled. For food safety it is important to prepare and consume while fresh and will not keep beyond a day in the fridge. Serves 4 as a main dish or 8 as an appetizer.

I absolutely love summer salads, and while Ceviche isn’t a salad per se, I like to serve it as one. The following links are really great summer salad recipes.

If you have a favorite go-to summer salad or dish we’d love you to share it with us in the combox. 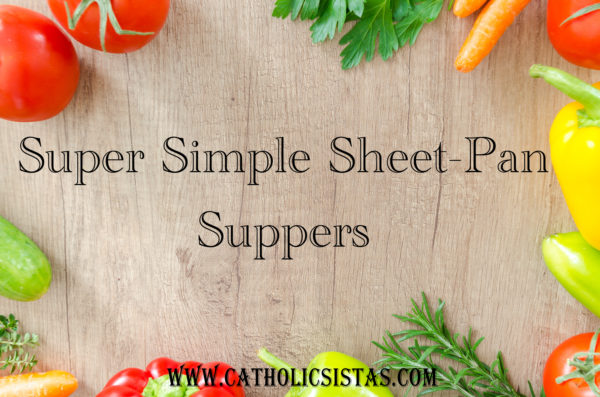 We are one month into a new school year. Are y’all as crazy busy as my family? Looking at my calendar I’m seeing only one weekday night per week in which we have nothing scheduled. How did that happen?

If your family life is anything like ours, dinner can get pretty tricky. Back in the day, crockpot cooking was the solution for busy families, and I definitely have several tried and true crockpot dinners in our rotation. Honestly, though, slow cookery is not my favorite. Today it seems Instapot cooking is all the rage, but I have resisted the pull; mostly because the idea of a pressure cooker freaks me out a little. Recently I’ve discovered sheet-pan roasting and I am in love. An entire supper, fit to feed a crowd, roasted together on one pan and ready in 20-40 minutes. Amen!

Have you tried sheet-pan cooking? If not, I’m sharing my favorite variations today. If you have, feel free to share your favorite recipes in the comments.

Spanish Chicken with Chorizo and Potatoes 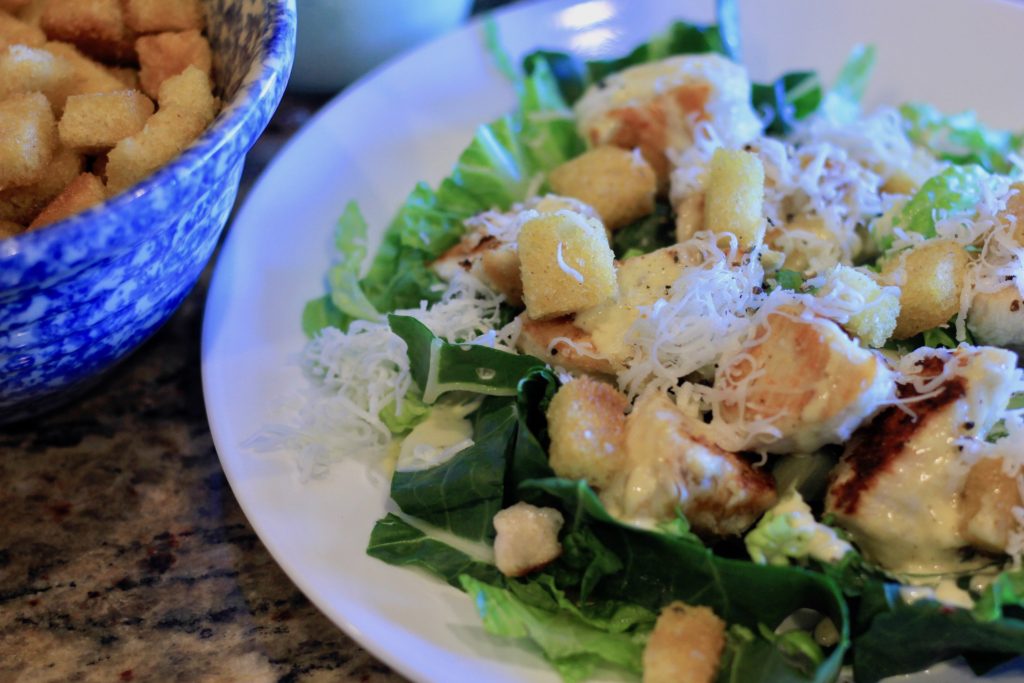 During the dog days of summer I could eat salad every day. There is just something about the crisp refreshing flavors of garden fresh greens and veggies that I crave. One of our family favorites is Chicken Caesar Salad. Over the years I’ve perfected our home recipe which relies on a homemade dressing, baked garlic croutons, and velveted chicken. 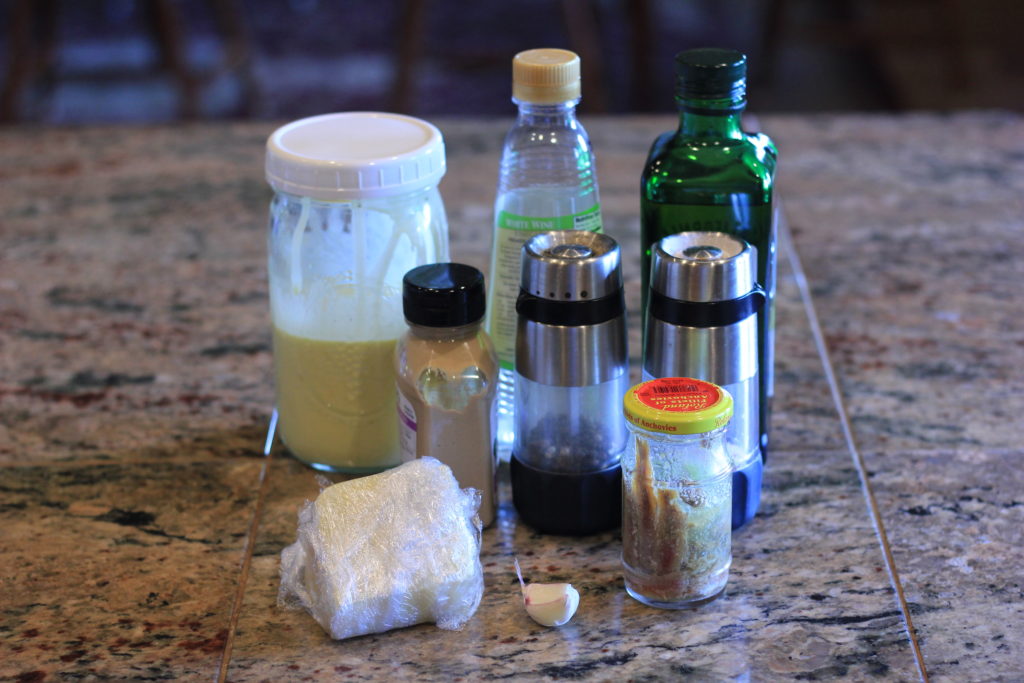 I make homemade mayo from the eggs our hens lay, but any jarred mayo will do. You may need to add a touch more olive oil and vinegar to get the right consistency.

Blend all ingredients in a blender. Pour into a container and refrigerate while preparing the rest of the salad ingredients.

Preheat oven to 325 degrees. Toss bread cubes with olive oil, garlic powder, and salt. Spread evenly in one layer onto a rimmed baking sheet. Bake for 15-20 minutes, turning every five minutes until cubes are golden brown and crispy. Set aside. 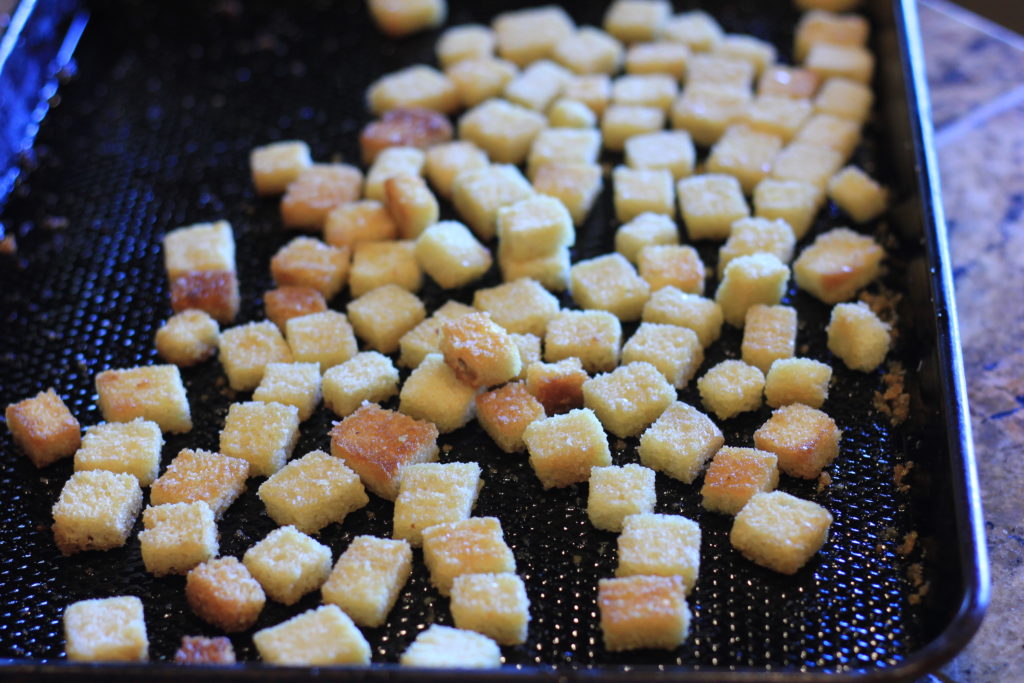 Velveting the chicken before sautéing makes for a crisp caramelized exterior and a tender juicy interior. It is important that you do not use a non-stick skillet as the chicken will not properly caramelize.

In a large bowl stir together the oil, cornstarch, flour, and salt and pepper. Add chicken pieces and toss until thinly and evenly coated with the mixture. 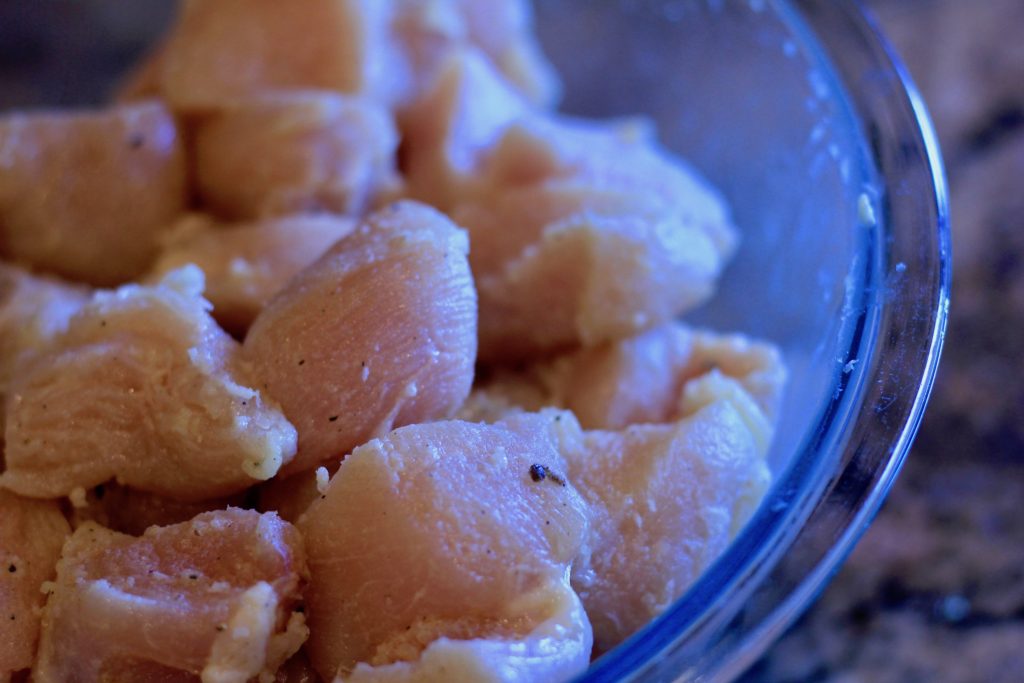 In a large skillet heat a couple teaspoons of oil until shimmering. Working in batches add the chicken in a single layer with plenty of space between pieces so the chicken will brown evenly. Allow chicken to cook without moving or stirring for 3 minutes. Using tongs turn each chunk to cook on each remaining side until golden brown on all sides and cooked completely through 8-10 minutes in total. Remove chicken from pan to a platter. Add a bit more oil before adding another batch of chicken. Repeat entire process until all the chicken has been cooked. Depending on the size of your pan it may take 2-3 batches to complete. Set chicken aside as you assemble the salad. 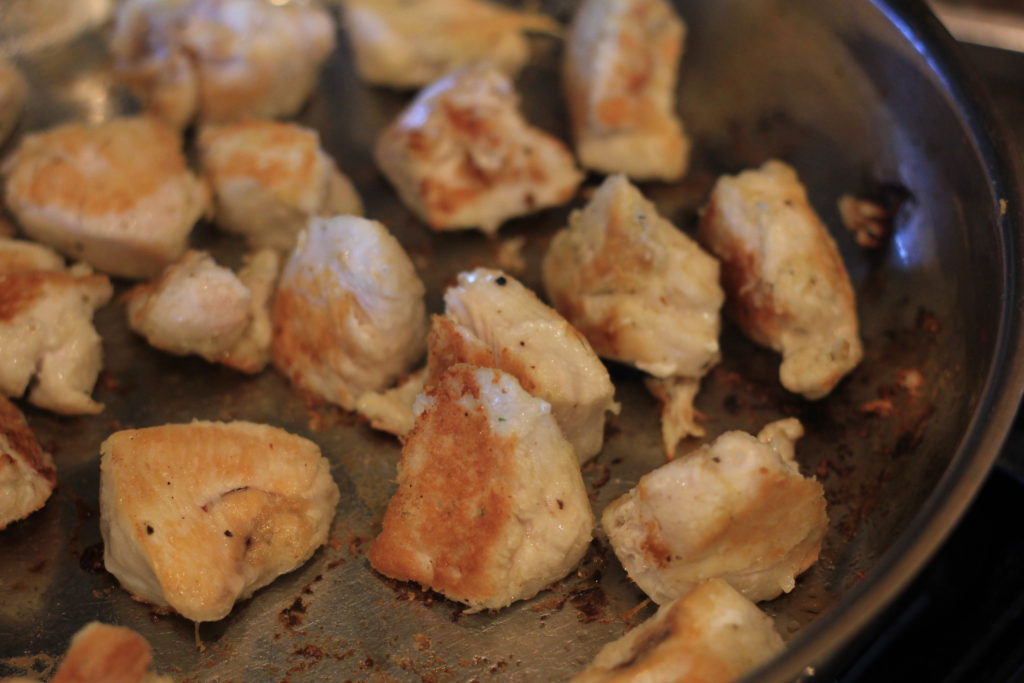 To assemble the salad:

Cut up 2-3 heads of romaine lettuce. On each plate place 2 cups of lettuce and a large scoop of chicken. Top with Caesar dressing, grated parmesan, and croutons.

In the fall and winter I might add homemade artisan bread to round out the meal. In the summer cool, crisp watermelon is our goto side.