This is the third of a series of posts reflecting line-by-line on the Anima Christi. 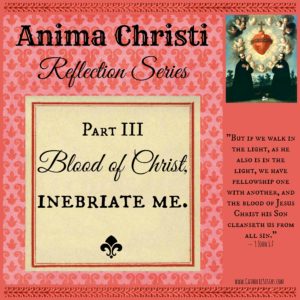 “But if we walk in the light as he is in the light, then we have fellowship with one another, and the blood of his Son Jesus cleanses us from all sin.” 1 John 1:7

Blood of Christ, inebriate me.

What does this mean? What are we asking?

First, let’s look at the definition of inebriate. When one thinks of inebriate one’s mind thinks “to be drunk, intoxicated”.

I looked it up and there is one other definition. Inebriate is a transitive verb meaning to exhilarate or stupefy as if by liquor. AS IF, not necessarily BY liquor. Exhilarate means extreme excitement. So when we are saying “Blood of Christ, inebriate me” we are asking Christ to fill us with his Life giving blood to the point of exhilaration! After all, without Blood, we cannot LIVE.

Jesus, I ask you to fill me with Your Love, Your Life so that I can show Your Light to the World.

But unlike the usual Communion time, there was a commotion near the altar steps. At first I wondered if some poor elderly parishioner had fainted or if someone tripped down the steps. Indeed the latter might have happened, but it wasn’t the cause of the commotion:

An Extraordinary Minister of the Holy Eucharist had spilled Precious Blood. They quickly addressed the issue and moved on to completing the distribution of the Eucharist, but it certainly caused quite a stir.

So what do you do if you spill Precious Blood either on your clothing or on the floor?

I was curious as to the answer to this, so I Googled. Though I couldn’t find the physical Canon Law on the matter in my admittedly brief search, I did find this, this, and this. I thought I would share, though I urge you to talk to your priest should you encounter these situations before acting on it to prevent improper handling.

Normally, when disposing of Precious Blood after Mass, the Precious Blood must be consumed (this happens at the altar by the priest after the distribution of the Eucharist is complete), and the chalice may be rinsed with clean water. This water may be poured directly onto the ground (some parishes have a special drain that specifically drains into the ground called a Sacrarium) but should never be poured down a normal drain (no element of Christ, or something who touched him, should ever reach a sewer). Under no circumstance is the Precious Blood to be poured down the Sacrarium, but the water that rinses the chalice after consumption can be, though, again by no means down a normal drain. The idea is that, though the water has touched residual Precious Blood, the amount of Blood left is so tiny that Christ is no longer truly present in it and is the reason why it can be discarded, with reverence, on the ground. The purificators are soaked in water, with the water discarded in the Sacrarium as well.

Should Precious Blood be spilled on the ground, purificators should be used to soak it up, and soaked as normal with the water discarded in the Sacrarium.

Most of us will never deal with this on our own if we are never Extraordinary Ministers of the Holy Eucharist, and if you become an EM, you’ll almost assuredly be trained in how to handle such issues.

If Precious Blood spills on your clothing as a parishioner, one article I found has a priest who advised that soaking the article of clothing at your earliest convenience in a bowl of clean water to get as much of the Precious Blood out as possible and then taking that water and discarding it on the ground (again, not down a drain) before washing the clothing in a washing machine is sufficient.

I pray that no one reading this ever faces needing to handle spilled Precious Blood. Ideally we would have perfectly nimble hands and feet where there would be zero risk of this most grave issue, but obviously our fallen state includes unintended clumsiness, and it’s useful to know how you might proceed.

***As always, you should ask your priest before taking the advice from a blog should you encounter these issues, and it’s always a good idea to take the most conservative and reverential approach you can.***