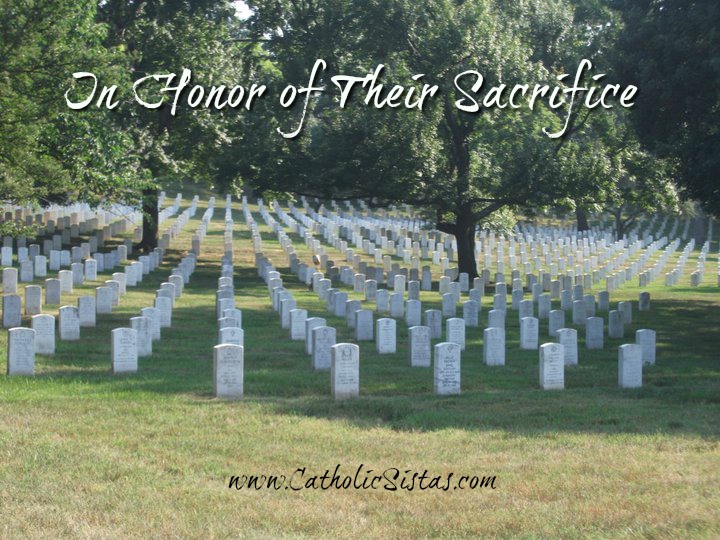 “Greater love has no one than this; that one lay down his life for his friends.” John 15:13

Today on Memorial Day we remember those who have died while in active duty for our nation; those who gave the ultimate sacrifice for our country and for each of us. We know that it is through their service, their sacrifice, that we are gifted another day. To honor their memory, let us live our lives in a worthy and meaningful manner- lives that allow Christ’s light and love to always shine forth. Let us live bravely and faithfully. To do any less would be to waste their gift of life and freedom.

If there is someone you would like to remember today, please post their names below or on our Facebook page. We would like to honor in grateful thanksgiving your loved ones who have given their lives so that we may continue to experience a life of freedom.

May you have a blessed Memorial Day. 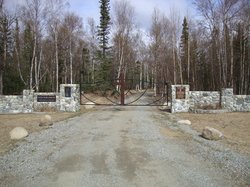 Our family marks Memorial Day by beginning with a visit to one of two local cemeteries. We stroll along the walks, “looking for soldiers,” as we remind the younger ones what US service stones look like. Since we have done this for years, we notice new graves and how familiar ones look that year (“Someone brought flowers for Sgt. Boyle,” or “Let’s clean up this sailor’s stone; no one’s been here.”). Both cemeteries have been carved out of the Alaskan forest so there are plenty of wild roses, dog woods, and yarrow flowers to tie into bouquets for neglected markers. Our mood is somewhere between comfortable and serious as we visit all the servicemen and women, reading their names aloud and decorating the lonely ones.

Of course, there are many other graves that we notice and wonder about: elaborately decorated boulders with someone’s story and photo etched into the stone; simple slabs with just a name and dates; spousal plots half printed and half empty ~ waiting; and the terribly tiny ones. I always cry in the reminder of searing pain, in the gratefulness of my family all together, in the acknowledgment that this is part of life, and in the great pride of being an American.

We complete our visit by tucking ourselves into a corner for prayer and a picnic among our fallen brothers and sisters. We remind the kids of what the day is a memorial for; we pray for their souls; we thank them for their service; we pray for their sad families; we thank God to be living in America. Our day at home ends with some night-time reading of a pertinent storybook (They Were Strong and Good, The Blue and the Gray, Pearl Harbor-ready to read are some on our children’s bookshelf) and a war film of Ken’s choosing for the older members.

Today is Memorial Day, my Sistas. May it be happy; may it be prayerful; may it be honorable. 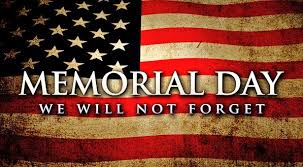 *The history of the holiday*

On this day we remember those who have fought for our land and our freedom.  It is with great honor and respect that we dedicate this day to those who have given everything they have to protect our rights.  It is important that we pass on this respect to our children and to future generations for without those willing to sacrifice their time, their safety, and perhaps even their lives, our rights would be in jeopardy.  Today, please remember those who have sacrificed their lives to insure that we can worship, speak, and live freely. 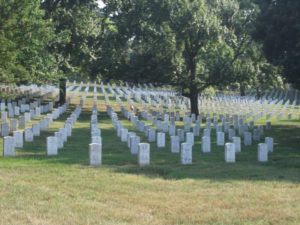 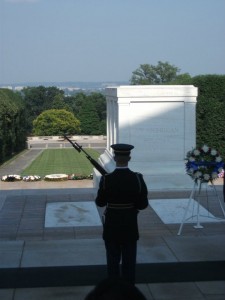 To honor those whose names we do not even know 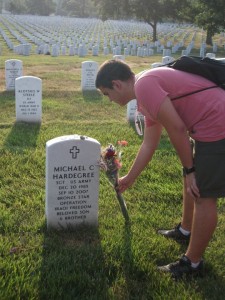 In remembrance of those we love and miss 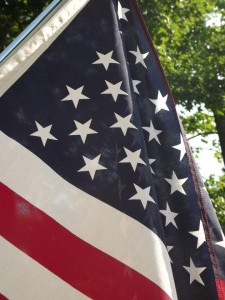 For pride in our country, our faith, and our fellow man 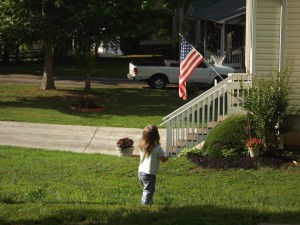 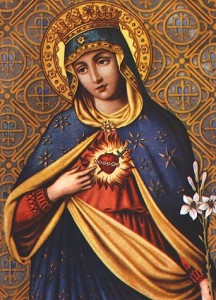 Some 2000 years ago a young woman gave her yes to God.  With that yes came great joy, because when you truly follow God’s will for your life you are inevitably joyful – not to be confused with the modern notion of happiness.  That yes, however, came with a price-tag of great suffering.

Mary has a servant’s heart.  As a young woman, newly pregnant, she walked 80-90 miles to help her aging cousin Elizabeth.  Not an easy task while pregnant.  She then had to undertake her own long journey to Bethlehem with Joseph, at which point she was heavily pregnant, and they were unable to secure a room.  They found shelter in a stable.  By today’s standards that would be tragic, but that hardship was tempered with joy because that stable became the birthplace of Jesus!

When you look at Mary’s life overall, those physical trials can seem trivial since it was not long after Jesus’ birth that the first of her Sorrows came to pass.  In Luke 2: 22-35, we read about the Presentation of the Child Jesus in the Temple and Simeon’s prophecy.  He foretold that Mary’s soul would be pierced by a sword, saying, “Behold this child is set for the fall, and for the resurrection of many in Israel, and for a sign which shall be contradicted; and thy own soul a sword shall pierce, that, out of many hearts, thoughts may be revealed.”

Simeon’s prophecy was the first of the Seven Sorrows that are a traditional devotion to Mary.  The traditional Sorrows are:  Presentation in the Temple, Flight into Egypt, Loss of Jesus for three days, Way to Calvary, Crucifixion, Descent from the Cross, and Burial of Jesus.  Given my own experience with loss, I can see another facet of sorrow that would have come hand-in-hand for Mary during the flight into Egypt:  Herod’s order to slaughter the children we know as the Holy Innocents. 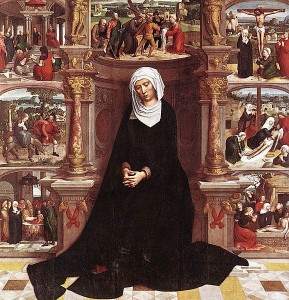 While the flight into Egypt and the difficulties of starting over in a country where they had no friends and didn’t speak the language would have been difficult, the lives of those children, slaughtered because her Son was born, would weigh heavily on her.  When they were finally able return to Nazareth, the lack of children within a year or two of Jesus’ age would be painfully obvious.

We don’t hear much about their lives until the next Sorrow-  Losing the Child Jesus at the Temple.  How they must have panicked when they realized that Jesus was not in the group with which they were travelling.  Again, this suffering was tempered by the joy of finding him, but I’m sure any parent can attest that that moment of sheer terror never completely leaves you.  This Sorrow is the last of the ‘easy’ trials.  In a few years Mary’s world will be turned upside down.

In a short period of time, Mary would experience the pain and loss that make her the most excellent intercessor for women, especially those who have lost children or who have had to deal with the diagnosis of an incurable disease that will affect their child’s entire life.

Mary would have heard Pilate’s sentence: scourging, crown of thorns, and finally crucifixion.  I’m sure that those words, that moment, burned into her brain, just as hearing the doctor say my daughter’s heart was slowly giving out is a moment I cannot forget.

While she may not have been present for the actual scourging and crowning of thorns, we know that Jesus met with her on the Road to Calvary and she would’ve seen the damage done to his body – suffering from which she couldn’t protect Him.  How difficult it is for a mother to see her child suffer – and how much more so when the innocent suffers for the misdeeds of others.

Mary was at the foot of the Cross where she would’ve been witness to the cruelty of the soldiers and the jeering crowd.  It was from that vantage point that she watched her baby die.  I was blessed in that I was able to hold my daughter, to sing to her as she left us, but, Mary did not even have that comfort. She could do nothing but watch helplessly. 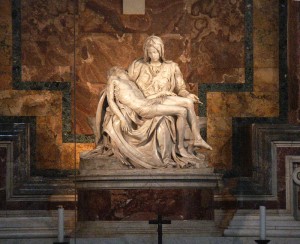 The sixth Sorrow is the Descent from the Cross.  Mary was finally able to hold Jesus in her arms and say her goodbyes.  She must have wept bitterly.

The final Sorrow in many ways is the hardest to handle: the Burial of Jesus.  There is a finality to burial that is difficult to bear.  You can no longer hope that there’s been a mistake…you know you will never see your living child again in this world, and Heaven is a long way from your mind when you are saying that final goodbye to your baby.

For Mary, all of her Sorrows were tempered and balanced by joy.  The sad stable became the joyous location of our Savior’s birth. She lost and then found Jesus in the Temple.  Even the sorrow of the crucifixion and burial are swiftly followed by the Resurrection.

I have had many dark moments in the days since my daughter died.  Today would’ve been my daughter’s second birthday; Memorial Day will mark two years since she left us.  Mary has been my constant companion on this journey even when I’m not aware of it.  I realized while writing this that the due date for my current pregnancy is the Feast of the Sorrows of Mary, September 15th.   Mary is uniquely qualified to walk with us mothers through our joys and sorrows.  Her mission is always to bring us to her Son, Jesus, and by uniting our sorrows with hers, we are transported to the foot of the Cross.

The Blessed Virgin Mary grants seven graces to the souls who honor her daily by meditating on her tears and sorrows. This devotion was passed on by St. Bridget.

(Say one Hail Mary while meditating on each Sorrow)
The Hail Mary: Hail Mary, full of grace, the Lord is with thee: blessed art thou amongst women and blessed is the fruit of thy womb, Jesus. Holy Mary, Mother of God, pray for us sinners now and at the hour of our death. Amen