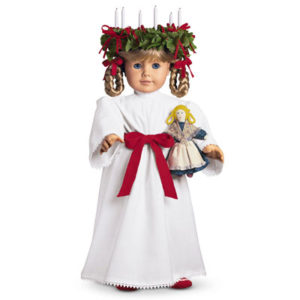 I’m Scandinavian with Viking roots–or at least, that’s what my 6’4″ Nordic father claimed. So every year, our family celebrates St. Lucia’s Day on December 13. It’s widely celebrated in Sweden, with public processions involving hundreds of children, but most Americans aren’t familiar with the tradition. (Unless they own Kirsten, the Swedish-born American Girl doll you see at right.) It’s a fun feast day our children look forward to because not only does it involve a costume and candles, but we get to eat cinnamon buns, too.

St. Lucia lived during the Diocletian persecution, which was the last and most severe persecution of Christians in the Roman empire. In 303, Emperor Diocletian demanded that Christians join in pagan religious practices. Those who refused to sacrifice to pagan gods were imprisoned or even executed.

According to tradition, St. Lucia was born into a rich noble family around 283. As a young woman, she had a great faith in Christ and even consecrated her virginity to God. After her father died, Lucia wanted to distribute her dowry to the poor, but her mother objected. Her mother later accompanied Lucia on a pilgrimage to visit the relics of St. Agatha, a virgin martyr who had died 50 years earlier. While there, Lucia’s mother was miraculously cured of a hemorrhage that had plagued her for years. This softened the mother’s heart and she allowed Lucia to distribute a great part of their riches to the poor.

Unfortunately, Lucia had been unwillingly betrothed (probably by her father) to a young pagan. When he heard that his bride-to-be had given away most of her wealth to the poor, he angrily denounced her to the governor of Sicily as a Christian. The governor initially condemned Lucia to work as a prostitute, but when the guards tried to drag her to the brothel, they couldn’t move her. Then the governor ordered the guards to build a fire around her feet to burn her to death, but the flames didn’t harm Lucia. Finally, the guards were ordered to remove her eyes with a fork and stab her with a sword, which finally ended her life. This is why St. Lucia is often depicted in art as holding two eyes on a platter and why she’s the patron saint of the blind.

Gory? Yes! But you know kids–they love gory stories. And what an inspiring one, too; St. Lucia is not only a great example of compassion and steadfast faith in Jesus, but she’s a beautiful example of purity in a world that little values that virtue. Our children will likely face social pressure for striving to maintain their own purity and St. Lucia can provide a much-needed model and intercessor for them.

What makes St. Lucia’s Day special is that the celebration takes place at breakfast. Traditionally, a young girl dresses up in a white gown with a red sash. On her head she wears a crown of candles (paper or flameless are probably most prudent, though girls older than 12 wear real ones in Sweden). On the morning of December 13, “St. Lucia” carries a candle and plate of sweets into the bedrooms of family members, greeting them with, “St. Lucia invites you to breakfast!” (Seeing your little girls enacting this tradition is absolutely priceless, so have a camera ready.)

Family members then gather for a candlelit breakfast consisting of pastries and hot drinks such as tea, hot chocolate, or cider while discussing St. Lucia and offering intercessory prayers to her. You can add our own little twist, too–hard-boiled eggs that the kids are allowed to draw eyeballs on before eating, in honor of St. Lucia’s final sacrifice. 🙂

To help you make St. Lucia’s Day extra special, here’s the A-MAZ-ING recipe for overnight cinnamon buns we use. Think Cinnabon, though slightly smaller than the planet-sized gutbusters you get at the mall. But yeah, they’re THAT good.

What a blessing it is to be Catholic and enjoy these wonderful Advent feast days with our children. St. Lucia, pray for us!