This past week, the Vatican stated that Pope Francis fully supports reform of the Leadership Conference of Women Religious (LCWR), a group of leaders of various congregations of female religious in the United States. They represent the vast majority of the 57,000 religious sisters in the United States. This reform began last year under Pope Benedict XVI, after the Vatican determined that LCWR is out of sync with the teachings of the Catholic Church. Due to its interest in any story that could possibly portray the Church (specifically the Magisterium) in a bad light, you may have seen this story in the secular press; but as you probably know, we cannot trust them to get it right. Here are 6 things you need to know about this situation, from the perspective of a faithful Catholic.

1) This reform is a result of several years of observing and documenting concerns about the LCWR. The Congregation for the Doctrine of the Faith (CDF)–the office of the Curia that promotes and and protects true Catholic doctrine–determined in 2008 that a doctrinal assessment of the LCWR was needed because of these many years’ worth of concerns. The assessment began in 2009 and included dialogue with members of the LCWR. When the findings were presented in 2011, the CDF and Pope Benedict XVI decided that a reform would need to be undertaken. 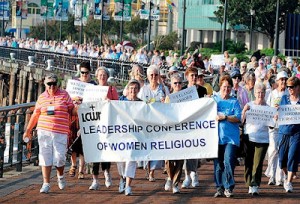 2) According to the CDF report, the doctrinal assessment of the LCWR revealed major problems. The talks given at LCWR events, and their own statements over the years, are said to have contained “significant doctrinal and moral content and implications” that are in opposition to the teachings of the Church, including advocacy for women’s ordination, a skewed vision of religious life, denial of the special teaching role of the Magisterium, and intentional dissent from Church teaching (couched in terms of being a “prophetic” voice for the times). The LCWR is also said to have failed to provide adequate training materials for their member congregations, and the formation of religious sisters in these congregations was found, in many cases, to be lacking in basic Catholic teaching. In other words, their duty as religious sisters to spread and uphold the entirety of Christ’s teachings—even within the walls of their own communities—is not being adequately fulfilled.

3) This reform is not meant to be a “punishment” and the investigation was not a witch hunt. Its purpose is to ensure that the authentic faith is being transmitted through the work of the LCWR and its member organizations, to enrich their own religious life and their witness to the world.  Given that LCWR members are the leaders of most of the religious sisters in the United States, it is safe to say that their words and works are very important to the mission of the Catholic Church in America. The sisters represented by the LCWR are the face of Catholicism for many people in this country. The Vatican has good reason to be interested in what they are doing and saying in the name of Jesus Christ and the Catholic Church. There is also a canonical right to investigate and initiate reform.

4) The Church did not say that the LCWR was “too focused” on serving the poor or advocating for social justice. The LCWR and the secular press (and publications that call themselves Catholic but pride themselves on dissenting from the Church) are mis-framing this issue as a conflict between focusing on social justice and pleasing the Church’s leadership. The CDF lauds the LCWR’s efforts in the social justice arena but recognizes that social justice does not constitute the entirety of the Gospel.

The problem is not that the LCWR and its associated religious sisters are serving the poor “too much” but that that they are failing to situate this emphasis on social justice in its proper context. To illustrate, their website has an entire section devoted to social justice but does not appear to address abortion. It is not considered to be an aspect of social justice. But how can there be any true social justice when we are denying the right to life to the very least among us? How can there be true social justice when we are not addressing the grave harm that abortion causes to women and families (not to mention the children that it kills)? When the Kermit Gosnells of the world are allowed to operate shoddy and unjust clinics in the light of day, preying on poor and minority women and murdering newborns, with no oversight whatsoever, is that social justice?

The broader issue is that, if you are not teaching the doctrines of the Church (as revealed by Jesus Christ and the Holy Spirit) even to your own religious community members, then you cannot adequately represent Christ and His Church in your service to the poor. Jesus did not become incarnate principally to build a “just society” here on Earth. In fact, he said the poor would always be with us. He came to save us from our sins—our spiritual poverty—so as to free us to spend eternity with him in Heaven. Of course Matthew 25:31-46  and other Scripture passages indicate the necessity of meeting the material needs of our neighbors; but the revelation of Jesus goes beyond those passages. How can the corporal works of mercy be carried out without reference to or concern for the spiritual works of mercy, and the other teachings of Christ? When people water down the rest of the Gospel and focus exclusively on Jesus’ call to tend to others’ material needs, the witness of the Church is weakened and souls are endangered.

Pope Francis’ agreement with this reform only serves to bolster the above points. If there is one thing that Pope Francis has communicated about himself since he ascended the papal throne, it is that he cares deeply about the marginalized. Social justice is very important to him. He cannot be considered someone who cares “only” about dogma and not about action. And yet, he also believes that this reform is necessary. I hope that this fact will give the sisters some food for thought.

5) The LCWR denies the accuracy of the CDF’s assessment, and questions the fairness of the proposed reform. One need only take a look for themselves at past speakers at LCWR events, and read the very words of sisters under the LCWR umbrella  to find evidence that something is amiss. The distrust of the Vatican and the concern that it will interfere with the mission of the LCWR are still further support for the need for this reform. This is precisely the assertion with which the sisters disagree, however. It seems as though they are not so much denying the fact that they are at odds with the Church as they are denying that it is problematic.

6) The orders of religious sisters represented by the LCWR are, overall, shrinking and dying out. The average age of their religious sisters is above that of the sisters under the umbrella of the Council of Major Superiors of Women Religious (CMSWR), which was formed in the 1980’s to accommodate the religious orders that disagreed with the religious and political attitudes of the LCWR. (The fact that CMSWR was formed in the first place speaks to the need for reform of LCWR. A comparison of the websites of the groups is also telling). Young women today are more enticed by the orders that are under the CMSWR, suggesting they are not impressed by the “Gospel of social justice” when it is divorced from the dogma and rich tradition of the Catholic faith. It seems that if they are to commit their lives to a religious order with the name Catholic, they want to be authentically Catholic.  The sisters under LCWR recognize that they are dying out, but do not seem to understand the implications of that fact. 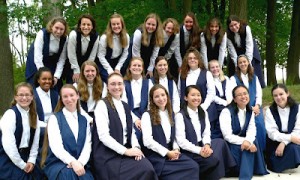 The most important point to take away from all of this is that the sisters associated with the LCWR desperately need the prayers of faithful Catholics, as do those in the Church tasked with implementing this reform. There is hope that the sisters can come to an understanding of the fact that love separated from the Truth is not love at all.

(For another look at this from a faithful Catholic source, I recommend this article).