Yesterday was Father’s Day; the day we set aside to celebrate the men in our lives who have helped us become the people we are today.  In many ways, like Mother’s day, Father’s day has become a very commercialized holiday- perhaps not quite as commercialized as Mother’s day but still less about recognizing the importance of fathers and more about finding just the right gift to wow Dad.  Of course, the fact that fathers have a day to themselves is actually a feat in itself as we, as a society, move away from recognizing and emphasizing the importance of fathers in our children’s lives.  We have to ask ourselves why this is happening and what we can do to stop it.

Recently I was aghast to hear someone say that men are not important, that fathers are not truly needed in our children’s lives, and that a mother can provide all her child’s needs by herself.  For years now we have been force fed the idea that men and women are equal in all things; that we should be equal in all things.  The problem with this idea is that men and women are different and have been made for different purposes.  We are both perfectly made, but very differently.  Still, our roles are complimentary.  We see from the very beginning that God saw man needed woman and He made sure that Adam was blessed (yes blessed!) with Eve at his side. 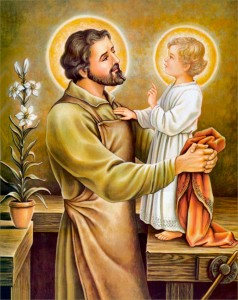 Likewise, God knows and understands that a child needs both a mother and a father.  God, as the Father of Christ, could have easily just allowed Mary to raise His son alone. He knew that while Mary would be able to be the mother that His son needed, Jesus would also need an earthly father to help guide Him through the pains that awaited Him growing up.  The very fact that He chose Joseph to be this earthly father tells us how important God knew this role would be.  When Joseph heard the news that Mary, his betrothed, was expecting, he quietly tried to end their relationship.  God had other plans though.  When we think about Jesus’ conception we often only focus on the miraculous announcement to Mary, however, God sent His angel to Joseph too.  That bears repeating… an earthly father was so important to God that He sent His angel to assure Joseph that all was well.  If God thought that fatherhood was that important, shouldn’t we think so too?

I suppose God already knew what studies would show us now regarding children who grow up in fatherless homes. We know that there are cases where a mother has to assume the role of both mother and father and many times she is able to do an extraordinary job of filling both roles and should be applauded for her efforts to fullfill all her children’s needs.  However, we know that even though she is doing a wonderful job it doesn’t negate the fact that fathers ARE important and their presence plays a major role in their development.  Ongoing studies have shown that children who have no active father in their lives are more likely to be poor, to be aggressive, fail in school, to be incarcerated later in life, to be abused, to be sexually active at a younger age and more likely to get pregnant.  This is not to say that all children without fathers in their lives will be all these things but the likelihood is greater than children who grow up with a father who takes an active role in their lives.  With statistics like this why would we let society fool us into believing that we can do it all ourselves?

I know you are probably saying, “But what about the deadbeats? What about the dads that are “bad” dads?  What about those guys?”  Well, I suppose I would say that perhaps we need to look at why those men are that way.  What about their childhood affected the way they see fatherhood? Are they damaged by the way society has made fathers less important in a world where they are needed more than ever? Can we blame them for how they were raised to behave and how society encourages them to behave?

We need to ask ourselves what we are doing to help those men become the dads they should be.  Are we making it easy for them to be deadbeats?  Are we making it easy for them to say I don’t have to do this?  Are we enablers?  Likewise, for dads who want to be there, are we making it hard for them to be good dads?  Do we get in the way of their parenting?  Do we think we know so much about how to parent that we impose our own set of rules on them and not allow them to grow into a good parent? Do we allow them space to make mistakes and learn from them the way we do? Do we encourage them to be active with our children? 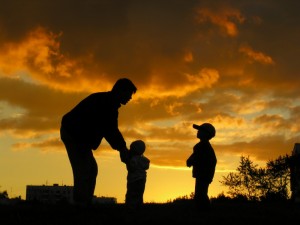 We may be getting force-fed the notion that as women we can do anything and all things as good (if not better!) than men, but the reality of it is that we can’t and we shouldn’t try to do the things that God has intended for man to do, especially if there is a father present who wishes to fulfill his role as God intends.  God called men to be fathers.  He made them with different strengths and abilities than women.  He made them to compliment mothers.  As mothers we should lift up the fathers in our children’s lives and we should try to help them become the best fathers possible.  We should honor and respect them and teach our children to do so as well.  We need to pray for our children’s fathers.  They need to know that we think they are important and needed.  They need to know that they are invaluable in our children’s lives.

God could have easily allowed Mary to raise Jesus by herself but He knew how important it would be for Jesus to have an active father in His life.  Because of this we know that fatherhood is not just important but vital!  We need fathers.  We need their guidance.  We need their support.  We need their love.  We should be doing everything in our power to insure that our children grow up with positive male role models, especially their fathers whenever possible, in their lives.

Saint Joseph, guardian of Jesus and chaste husband of Mary, you passed your life in loving fulfillment of duty. You supported the holy family of Nazareth with the work of your hands. Kindly protect those who trustingly come to you. You know their aspirations, their hardships, their hopes. They look to you because they know you will understand and protect them. You too knew trial, labor and weariness. But amid the worries of material life, your soul was full of deep peace and sang out in true joy through intimacy with God’s Son entrusted to you and with Mary, his tender Mother. Assure those you protect that they do not labor alone. Teach them to find Jesus near them and to watch over Him faithfully as you have done. Amen.    ~Pope John XXIII