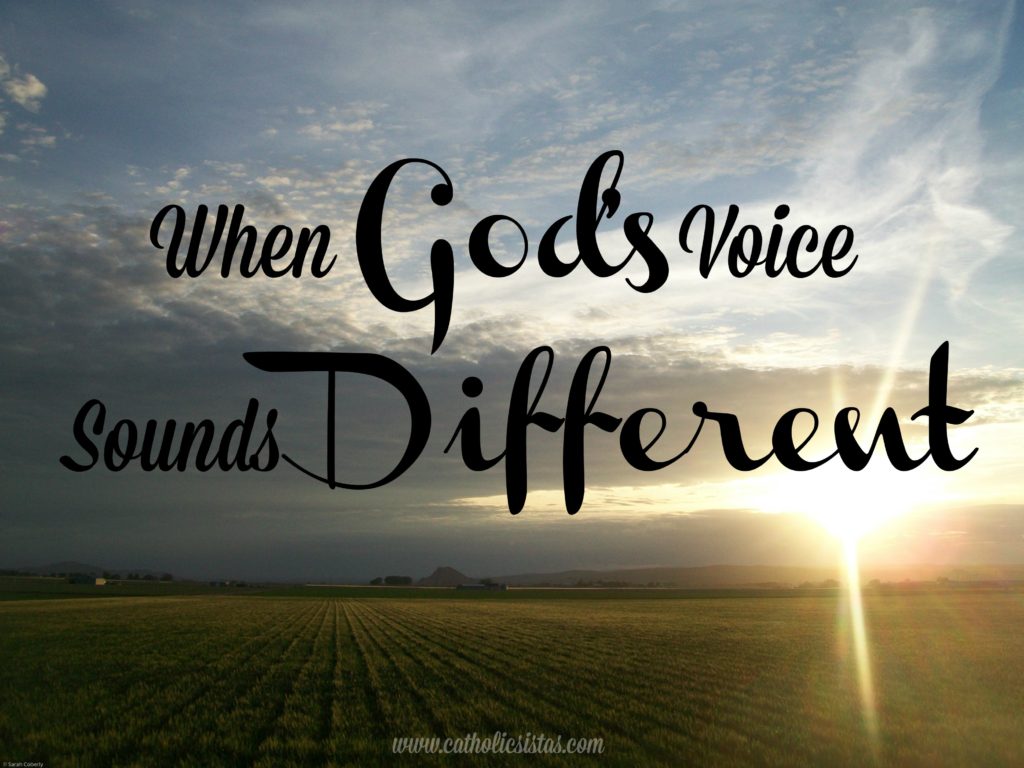 I recently found out that I will be needing surgery soon to remove a cyst on my ovary. This isn’t a very abnormal occurrence, but in my case it could be potentially life-altering. Just over one year ago, I had my other ovary removed due to another cyst — a much larger one that time. I also found out from that surgery that I have endometriosis. For someone in her 30s who is still single yet has always dreamed of having children (with the right man, of course), the last year has been tough, and this upcoming surgery is more than a little threatening to some of those dreams.
I’ve never been one of those people who gets clear, unequivocal messages or directions from God. I always try my best, albeit in my very flawed way, to be open to him and whatever he wants for my life, but a lot of the time it can feel like I’m just leaping without a lot of assurance that any given choice is God’s will. As in anyone’s life, some things I’ve chosen have worked out and some haven’t — but because I’m never quite sure if I’m hearing God right, I tend to blame myself and beat myself up when things don’t go well, and when my life isn’t turning out the way I thought it would. 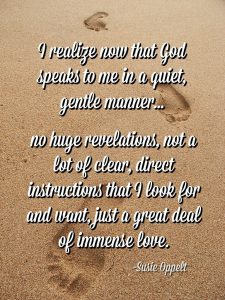 My situation now, including the upcoming surgery, have helped me see more clearly that God’s been there with me all along. He’s allowing this time of uncertainty, and he’s given me my specific crosses, for very good reasons that can be explained with the word “love.” I realize now that God speaks to me in a quiet, gentle manner — no huge revelations, not a lot of clear, direct instructions that I look for and want, just a great deal of immense love. Earlier this year, I was on a retreat during which I felt that love God has for me to a degree I’d never felt before. Being more of a head knowledge person, I’ve always been able to trust the fact that God loves me without necessarily feeling it much (if at all). On this retreat, however, I felt it and heard it almost as clear as if it were someone standing right in front of me.
That experience opened me up to the revelation — which probably should have been obvious sooner — that my life right now, despite not being what I hoped it would be by this point, isn’t a backup plan that God haphazardly put together for me when I didn’t listen to him earlier in my life. His plan for me and my holiness directly includes this time of singleness, and facing potential permanent infertility. It’s not at all what I would have chosen for myself, but through this time God has brought me so much closer to him. I wouldn’t have been able to have the relationship with him that I have if he had given me a husband right out of college and multiple kids by the time I was 30. His ultimate goal for me, his deepest desire for me, is not for me to be married, but for me to be as close to him as I can possibly be. Our vocations are always meant to bring about our holiness in the best way possible for each of us, and that’s going to look different for everyone. Some people get the lives they want right off the bat, only to find out that it’s not what they thought. Others are asked by God to wait (and wait…and wait…and sometimes wait some more). He knows so much better than we do what will truly make us happy and holy, and sometimes that requires a time of pain.
For far too long, I’ve been listening for God’s voice to sound like a “yes” to whatever prayer I might be praying at the time. I’ve been listening for him, expecting clear instructions from above, like the voice of a pilot on a plane telling the passengers where they are and where they’re going and when they’ll get there. I’ve been listening for God to sound a whole lot like me and the way I think things should go. But God truly is that small, still voice. When he’s talking to me, he’s not my pilot telling me where the plane is headed. He’s a best friend, so close to me that he doesn’t have to speak above a whisper, letting me know that he’s here, guiding me, teaching me, and, most importantly, loving me even in the pain and uncertainty that life can bring.

I have been blessed in my life. I had a happy childhood, I have a wonderful husband and two amazing children. I have a faith that has carried me through the few trials I’ve experienced, and I’ve grown as a wife and mother every day.

However, the past couple of months have been particularly difficult for my family. I won’t go into details in order to protect privacy, but it has probably been the most I’ve struggled since I’ve been married. I said many times during September and October that I felt the Lord was testing my mettle, and I believe it.

My husband and I decided it was in the best interest of our family to move from our home in central Florida to central Illinois. My mother and siblings live in central Illinois (and my father and much of my extended family in northern Illinois), and we decided we could care for the family better in Illinois right now.

When the decision was made, I knew in my heart it was God’s will for our family. So I trusted that if I trusted the Lord in this decision, things would fall into place for the move. I was right in ways I never expected!

The first challenge was the actual move. We needed to get down to Florida, pack the house in a rental truck, and drive it back up to Illinois. We didn’t want to take the kids with us since we had to be out by the end of the month, so it was decided that Hubby would stay with the kids in Illinois, and I would go down to pack the house. And I’d need help.

Both my parents spoke with their bosses to see about rearranging their work schedules to go with me. My dad had the better schedule for it, so he said he’d go to Florida with me. In retrospect, if Mom had gone instead, we wouldn’t have been able to lift a lot of the heavier furniture on our own. With Dad there to help, we were able to take everything I wanted to take.

At 5:30 a.m. on Wednesday morning, Dad and I got in my car and drove to central Florida. We swapped drivers so we didn’t have to stop overnight. We arrived at the apartment around two in the morning and went to sleep.

While we were on the road to Florida, a financial obstacle was moved for us. I had looked at a moving truck from a particular company, and while I wasn’t ecstatic about how much it was going to cost, it was fine. I’d figured it would be that much. Well, my uncle suggested another company, and I’d found a truck that would work for about $200 less, so I was happy about that. When I called my husband for him to reserve the truck, he looked at a third company that was even less, so we’d end up saving about $400 on the truck! I’d been concerned about the financial aspect of moving, from the truck rental to gas to food for the trip, but with what we saved on the moving truck, everything worked out fine!

On Thursday morning, we picked up the truck and started loading it. The more we put in the truck, the more I was thankful we’d gotten the one we did. The other two I considered were smaller, and our household goods would not have fit. The truck we got fit everything I wanted to bring with us just perfectly.

There were other, smaller things that happened that showed me that God’s hand was in this move. For example, my dad decided we needed a two-wheeled hand cart and some tie-down straps. The hand cart he found at Lowe’s was out of his price range, so we decided to go to Big Lots to look. On the way there, he asked about a store called Harbor Freight. I’d never heard of it, so I told him I didn’t think there was one around. We pulled into the Big Lots parking lot to find a Harbor Freight two doors down. (Yep. I’ll never live that one down!) Not only did we get the hand cart and tie down straps, but both were on sale (the hand cart was almost half off)!

On the way back up, my dad and I talked about all the things that fell into place for the move to go so smoothly. There were other people who wanted to go with and help us pack the apartment, but if they had, I would have had to drive my car back separately rather than use a car dolly because the truck only had two seats. (The car dolly saved us in gas on the return trip!) Originally, Dad and I were going to leave very early on Thursday morning, and I had to be out by 6:00 on Saturday. If we’d left on Thursday, we wouldn’t have gotten done in time.

Even as we were leaving, things fell into place. I was told by the woman at the leasing office that I had to turn the keys in by 6:00 p.m. on Saturday. When I went to the leasing office to turn in the keys a little before 6:00, the sign in the front said it had closed at 5:00 p.m. However, someone just so happened to be there late speaking with a potential resident, and I was able to drop off the keys.

Needless to say, my dad and I did a lot of praying during that trip, thanking God for all the blessings we had every step of the way.

I enjoyed living in Florida. I really did. But it seemed that, most of the time, living in Florida was one challenge after another. Conversely, the move to Illinois was so smooth that I can’t help but believe that this is where God wants us to be. Under normal circumstances, there’s no way we’d have been able to afford to move to Illinois. But everything fell together. This big, scary adventure of a move was easy.

That’s how it works, isn’t it? God has a plan for us. And the plan isn’t arbitrary. Our Lord only has our best interests in mind. And when we try to do things our own way, we get nothing but challenges. Things don’t work out, plans fall through, and every step is a battle. But if we remember to trust God and the plan for our lives and families, and get ourselves out of the way to let God do things the way they should be done, everything just falls into place.

It’s not always easy to let go and let God. It’s something I’ve struggled with in my own faith journey. But let me tell you, as someone who has seen God’s miraculous work first-hand in the past couple of weeks, that if you trust God to handle the hard parts, then there will be far fewer hard parts to handle.

Let go, let God, and you can see miracles happen every day.