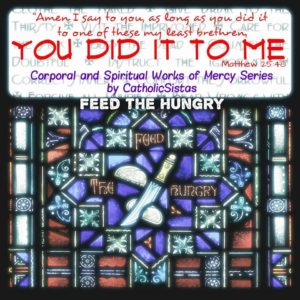 Feeding the poor is a politically correct thing to do. And feeding them in a way in which others know what you are doing will gain you bonus points in this world. But we are not just called to write a check, go to a fundraising gala, run charity miles, and coordinate canned food drives. While all of these activities have an important role to play in this world, they require nothing from us unless we are giving without the hope of worldly reward; praise, admiration, attention. By doing these things, we can pat each other on the back and tell ourselves, “Good job!” As Christians, we are called to do so much more. We are called to encounter the hungry in the flesh, speak to them, and help them recognize their dignity and worthiness.

These are what I call the Trinity of Lent. And, when they work in unison, they reflect the working of Christ in our heart. For example, it is wonderful to give a homeless man $5. But any non-believer is capable of this act to assuage the guilt of their relative affluence. It is, however, holy to pray for him, encounter him, know his name and share yours, and to in turn deny yourself a $5 luxury; a custom made cup of coffee, for example. And, if you can afford a $5 cup of coffee and a $5 donation, then consider a $10, $20, $30 $100 gift to a stranger, and again, deny yourself the same. In silence. Cheerfully.

He is just going to buy drugs

God does not say, “Give only to those who have good character and can be trusted.” But, we often use this as an excuse to hold tight to our wallets. I have been guilty of this. I recall a time when a man approached my husband and I in a public place where our children were playing. He gave my husband, what I called at the time, “a sob story” and my husband turned over a generous amount of money. Cue my eye roll. The man asked for our address so he could repay us and I told my husband, “No!” I did not trust the man. I thought he and his thugs would go to our house and rob us. Another stranger approached my husband and chastised him for giving that derelict money. “He’s just going to buy drugs,” the man admonished.

After some silence during our drive on the way home, and some soul searching on my part, it was revealed to me that generosity is never wrong. I owed my husband an apology. So what if he bought more drugs? He also had a moment to witness the kindness of a man who would give himself without any strings and without judgment. My husband did not judge the man and he would be called a fool by the world for doing what he did. In fact, the other stranger did call him a fool, in so many words.

Another time, our car was broken into and our GPS was stolen. I really didn’t care about the GPS. And, I told my kids to pray for the guy who did this. And, I said to myself, “If he had just knocked on the door and asked for it, I would have given it to him.” God saw fit to test my thoughts on this and in the next week or two, I was approached by three beggars. I told the first one, “Sorry, I don’t have any cash.” The next one, I never saw clearly, but as I was getting out of my car, I heard a voice begging and the shadow of a person approaching. I got back in my car and moved to another parking space. Then, I went into a restaurant to meet my siblings, and I kid you not, a woman was going table to table begging! This never happens. I opened my wallet and gave her what I had. This experience caused me to examine what Christ meant when he said, “Amen, I say to you, what you did not do for one of these least ones, you did not do for me.”

Be Prepared to Give

Following the inspirations of friends of mine, I started carrying pre-loaded fast food cards set aside for the purpose of giving to strangers. Some cards have sat in my wallet for months. Funny how once I learned my lesson, those lacking found another path. But, my kids have helped me spot them. Sometimes, we have had to loop the block once or twice so we can pull up close enough to have a conversation with them. We once met a woman who was begging for herself and her four children. What a life lesson for my kids who think we are poor! They have no idea. But, they are learning. The best way for them to learn, nay, for us to learn, is to encounter the poor; to see them with the eyes of our soul.

“Wickedness is not always overt: the neglect of simple kindness, great or small, kills as surely as open violence.” ~Magnificat reflection on Proverbs 11:28

Recently, we were blessed and humbled to receive correspondence from a mother who is rightly and deeply touched by her young son Alex’s devotion to feed the hungry, in response to Pope Francis message and example of feeding the hungry. With her permission, we are running her letter to us to let you know about Alex, who made local news by donating the money he was gifted for his First Holy Communion to a local kitchen to feed those without food. We at Catholic Sistas were inspired and we think you will be, too.

I am a subscriber to your blog and would like to thank you for the articles and pinterest photos that you share every day. It’s really helping me along with my faith journey.

I wanted to bring this piece of local news to your attention. It’s about my son, Alex. He just made First Holy Communion in May and received money for the occasion from friends and family (they didn’t know what he was planning to do with their gifts). He decided to donate all of it to the local Ecumenical Kitchen. He is very 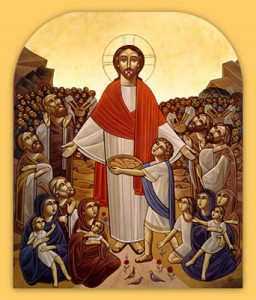 inspired by Pope Francis and said to me “if we don’t help the hungry, who will?” He donated $465 and fed about 350 people. We spent the afternoon with the patrons and Alex (with his brother Gabriel and my husband) shared a meal with them. It was just beautiful.

Well, here’s the link to the news piece. I thought if you felt so inclined to post something where it would be seen by more people in the hopes that they, too would help the hungry and helpless in their local communities, well that would just make Alex’s day.

Cristina has also given us the link to her blog post that features more details on this story. Please visit to read more!

HOW CAN I HELP?

Now that you’ve been inspired – and how could you not!, you might be wondering how you can help! Here are just a few ways you can help out the homeless who are often seen {at least in my neck of the woods, in Austin} on street corners at stop lights.