I woke up to this message yesterday morning. 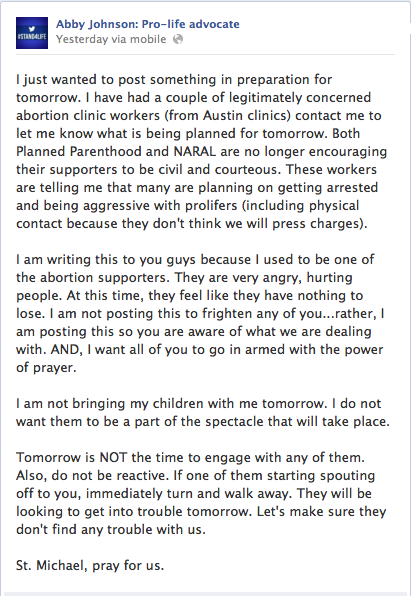 I knew Friday was going to be intense, but some friends and I had no idea exactly how intense it would be. The second reading for SB1 was set to start at 2 p.m. Through the day, news reports from friends in the Capitol trickled in – sharing the status of the lines to the gallery, to the pushing and shoving of the protesters of the praying pro-lifers gathered in the middle of the rotunda. Confirmed reports of protesters found with bricks, tampons, maxi pads {friends who were eyewitnesses to it all report seeing protestors bring in a MONTH’S worth of feminine products}, jars of urine and many bottles of feces caused heightened anxiety, but I was still determined to go.

As luck would have it, ok mostly a providential plan put in motion by the Great Almighty, I along with many other friends found ourselves in front of the Sacred Heart chapel at our parish yesterday, Friday evening.

Not one to give plans much thought, I threw out a line and asked anyone who wanted to carpool or caravan down to the Capitol to meet at 7:15 p.m. at the chapel.

We ended up with a good-sized crowd of 15 – we met inside the chapel to introduce ourselves, exchange numbers, and pray. We headed outside and saw a friend who just happened by the church with his empty 15 passenger van.

Just before we left, we made one final attempt to find Father Uche to ask for his blessings as we headed down. A friend and I went into the main church and eventually found both he and Father Michael talking. Father Michael, who has assisted in exorcisms before, knew the real danger we were headed into when I explained some of what had happened earlier in the day. We gathered the entire group and listened to Father Michael’s beautiful prayer followed by the power of both priests’ blessings upon us. We thanked them, offered up our sufferings for them, and asked them to pray for us.

We were on our way.

In a nutshell, the evening in the Capitol was intense, hot, crowded, cramped, LOUD, anger and rage-filled by protestors. We made our way in, were briefed by a friend who was already there, made our choices on where we each wanted to go with a tentative meet-up at midnight to see what we would do next.

After initially wanting to go into the middle of the rotunda where a small group of pro-life folks were praying and holding silent witness, we ran into someone who needed to take food down to one of the rooms. We peeled off and went to deliver the food while the part of the group went to the gallery line and the rest into the middle of the rotunda. As it was described to me later, it was beyond intense. Think outer circle of hell. I hope to have those accounts to share with you soon.

My husband, a friend of ours and I all trekked up to the third and fourth floor of the rotunda where I took video. I had to step away when the protestors started stomping their feet. The floor was vibrating. All I could think was how much anger was present in the rotunda, in the Capitol. And not rational anger – a deep-seated anger. The anger and shouting was probably therapeutic for some of them, a friend shared with me. She’s probably right.

As the evening progressed, the amendments moved through quickly. Social media kept me right on top of things, helping me stay in touch with friends peppered throughout the Capitol. I got a text from a friend stuck in the middle of the sea of orange encircling the few pro-lifers in the middle.

She wrote: We r in hell. No. For reals

The tension was palpable. As soon as I got word that the final amendment was being discussed and knowing that the vote was soon upon us, I texted her {as well as the others} back to GET OUT and to head to the basement to an overflow room. By this point, the DPS troopers {praise God for their presence!} had shut down entrance into the rotunda. The three of us stood waving to get the rest of our group’s attention – several tense minutes later, they emerged – a little rattled, a little deaf, but in good spirits.

We made our way down to the basement – but not without riding the elevator with a trooper with bolt cutters in hand, pressing the elevator buttons feverishly to get up to the rotunda. We would later learn he was on his way to cut protestors who had handcuffed themselves to the railing in the gallery.  We found an overflow room filled 2/3 blue and eventually all blue. We kept up with other friends around the Capitol and felt secure, despite the warnings of impending riots, a semiautomatic gun that was rumored to have been found on one’s person and multiple arrests. Not knowing what the atmosphere was like upstairs, we stayed put through all the closing remarks, including some fabulous ones by Senator Lucio, a pro-life Democrat who quoted Mother Theresa and Cardinal DiNardo, and Senator Donna Campbell’s amazing remarks which started with {roughly paraphrased} “people are entitled to their own opinions, but they aren’t entitled to their own facts” before launching into the practical application of the bill. I refer you to the senate archives to find their speeches – near the end.

In a handful of minutes the atmosphere in the room went from when is the last senator going to speak to, the vote is coming up! PASSED! Oh, a third reading is happening…um, NOW??!! And BOOM. Just like that, it passed the final reading. At midnight the Senate had finished their job of bringing back alley abortion clinics to basic standards of care.

::FOR YOUR CONSIDERATION: IS THIS FELLOW A PRO-LIFER?

YAHOO NEWS WOULD HAVE YOU THINK SO. WHAT CLUES MAKE THEM BELIEVE HE IS?

DO YOU THINK THE SECULAR NEWS WILL RETRACT THIS?::

I PRESENT EVIDENCE TO THE CONTRARY – LOOK AT THE PICTURE BELOW

NEED MORE PROOF? LOOK AT THE PICTURE BELOW.

Our group decided to roll through the rotunda on our way out the south steps after a friend reported that it was nearly empty. We walked past several troopers, thanking each of them for all their hard work, felt safe with all the troopers lining the pro-choice rally outside, and made our way back to the van and to the church, stopped by perpetual Adoration to give Jesus a big thank you, and then we all went home to collapse. 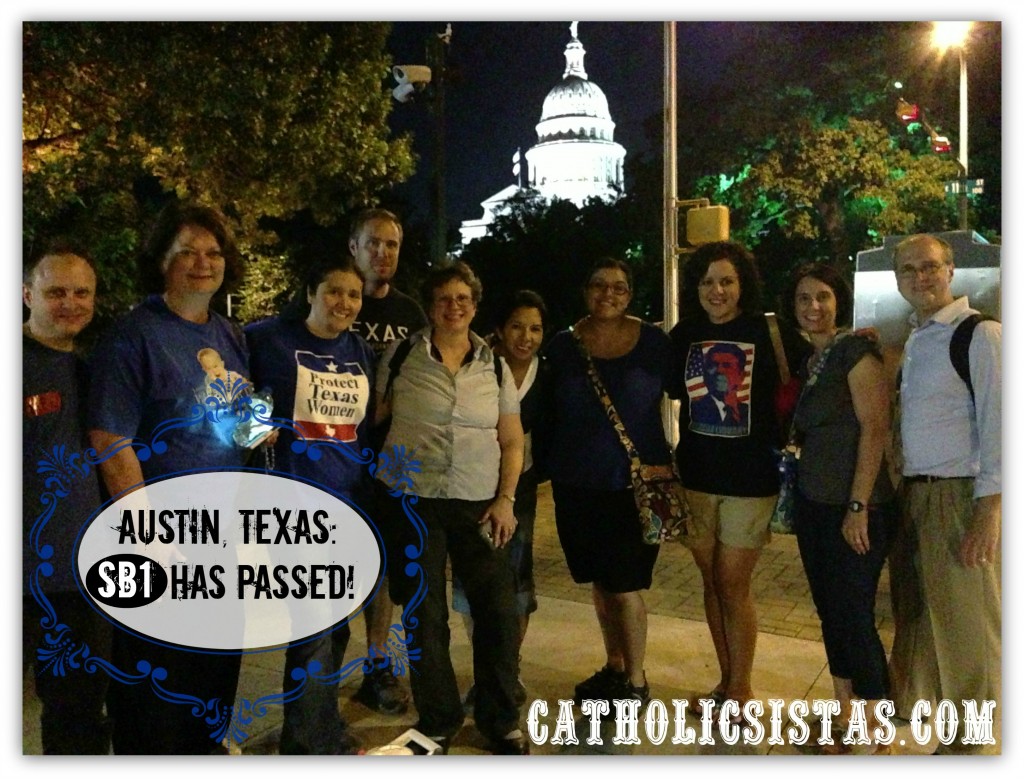 SOUND OFF! Were you there? Share your story below. We want to know your thoughts.