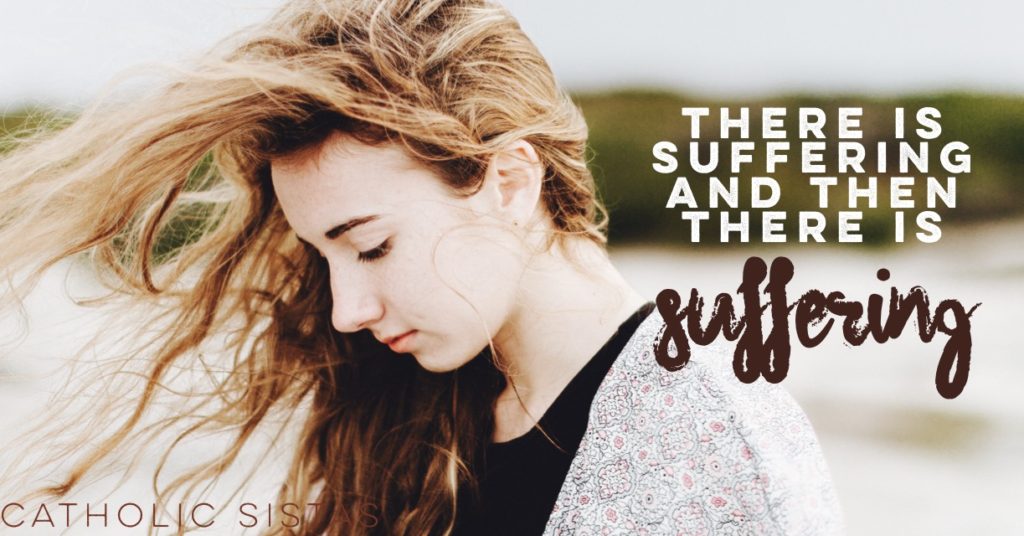 Lent starts next Wednesday and one thing I’ve been reflecting upon has been suffering in my own life.

We welcomed baby Emmie in January. If I had to do a breakdown of suffering, I’d say there are two kinds I’ve recently experienced an overlap – the kind you expect and go in knowing there will be discomfort and pain – you can even ask people ahead of time for their intentions so you can reflect and pray with them, and then there is out-of-left-field suffering.

Adjusting to a new baby and the demands of her schedule on our family were totally anticipated and expected suffering – I would say a joyful suffering because she is our seventh baby this side of heaven, after three consecutive losses in 2014, 2015, & 2016. I expected the sleepless nights, the hormone fluctuations, physically recovering from SPD from pregnancy as well as labor recovery.

What I didn’t expect was the normal new baby adjustments to be compounded by a cascade {more like the dam burst!} of illnesses. One day before Emmie was two weeks old, our nine year old son came in to show me his “spots.” We’ve had chickenpox go through the house before, but it had been his lifetime ago that we’d dealt with it. Four kids have been born since it went through the house…and this time with a BRAND new baby.

To say I was freaking out was an understatement.

We made the decision to quarantine our children, opting to keep our four year old from preschool though he had the all-clear from the pediatrician, until the incubation period had passed.

While this all unfolded, cluster feeding went on and, I imagine the entire first floor of my house resembled something out of Lord of the Flies. Too worried about potentially transferring germs from my kids to my own clothes, I did not engage my other children in affection – my primary concern was Emmie and making sure she did not come in contact with the chickenpox.

What started out as normal stress and suffering of having a newborn soon turned into the unknown, when-is-it-going-to-strike-next kind of suffering – a languishing that stretched me so far, I thought I would snap. I was sleep deprived, still in great pain from SPD from my pregnancy, cluster-feeding an insatiable newborn, and quite literally unable to leave my bedroom for those reasons.

After chickenpox entered the house, we would soon find ourselves at children’s urgent care because of an ill-timed newborn rash that popped up. Not normally one to panic over illness as a mom, this sent me because it came on so suddenly. Emmie was barely two weeks old and I wasn’t going to take a chance.

Chickenpox sends me, I won’t lie.

NEXT, I kid you not, the FLU entered our home. Our oldest son went on the coveted annual Diocesan Catholic Youth Conference for high schoolers in Waco and thought it would be a lovely gesture to bring home germies – yay.

One by one, family members fell like a sack of bricks.

Bottles and bottles of vitamin C and D consumed.

and chicken soup to our house otherwise.

Elderberry syrup to the rescue.

I prayed I wouldn’t get sick. But I succumbed. Another unexpected trip to Urgent Care during the Super Bowl confirmed I had the flu.

Apart from seasonal allergies, I never get sick. All I could do was take comfort in knowing that nursing Emmie would provide the antibodies to hopefully prevent her from getting sick. This poor girl had been restricted to our room and now *I* had the flu*.

So, what’s the difference between anticipated suffering and the kind of hardship you never saw coming? Well, if you’re like me and let the illusion of control guide your life {you know – you like to plan things, make sure there’s a plan in place even in the unexpected because it’s what helps you power through those challenges}, you know that it’s largely the response to the suffering and ultimately the surrender. When you don’t see it coming, it changes how you respond.

I had nine months to mentally prepare for the suffering of labor.

I had nine seconds to mentally prepare for chickenpox and its effects on the baby.

Last year {and even the year before that} we found ourselves in this same kind of juxtaposition of suffering, an anticipated and confirmed miscarriage on the same day our son broke his ankle that required surgery. Maybe God is calling us to ponder these sufferings prior to and during Lent so that we have no choice but to completely surrender and rely on Him.

How do YOU respond to suffering of either kind?

*We are now four weeks from the original chickenpox breakout, and the update is that Emmie did not get chickenpox or the flu, thanks be to God!