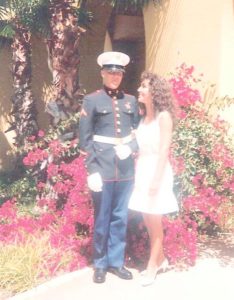 Today is not only the 239th birthday of the United States Marine Corps (Semper fi!), it is also the 20th birthday of our first child (Yay Rees!). Since my husband was an active duty Marine when he was born in November of 1994, he was the subject of much good-natured ribbing by his squadron: What a perfect devil dog to command his wife to give birth on the 10th; No one loves the Corps as much as Howell; Think you’ll make rank quicker now; How come you weren’t at the ball? While I am crazy-proud that he served for eight years, I am also crazy-happy that he got out. We esteem the Marines this day, but even more our wonderful son. I would consider it a great honor if any of mine wears the uniform.

While Rees is not allowed to serve, he has grown into a strong young man who is gung-ho about his life. He has adopted the military code of conduct to the best of his civilian abilities. Simply put, it is ~

1. Be prepared to give your life
2. Never surrender to the enemy
3. Always plan an escape from the enemy
4. If captured, keep the faith with fellow soldiers

He applies this to his life as a Catholic, a friend, an employee, and a student. I am crazy-proud of him.

From the Marine’s Prayer: 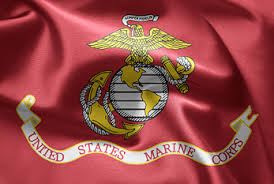 “Almighty Father, whose command is over all and whose love never fails, make me aware of Thy presence and obedient to Thy will. Keep me true to my best self, guarding me against dishonesty in purpose and deed and helping me to live so that I can face my fellow Marines, my loved ones, and Thee without shame or fear. Protect my family.

If I am inclined to doubt, steady my faith; if I am tempted, make me strong to resist; if I should miss the mark, give me courage to try again.

Guide me with the light of truth and grant me wisdom by which I may understand the answer to my prayer.”

Happy birthday to the USMC, America’s protectors and defenders.

Happy birthday to my boy, a good man.

(And good night, Chesty Puller, wherever you may be.) 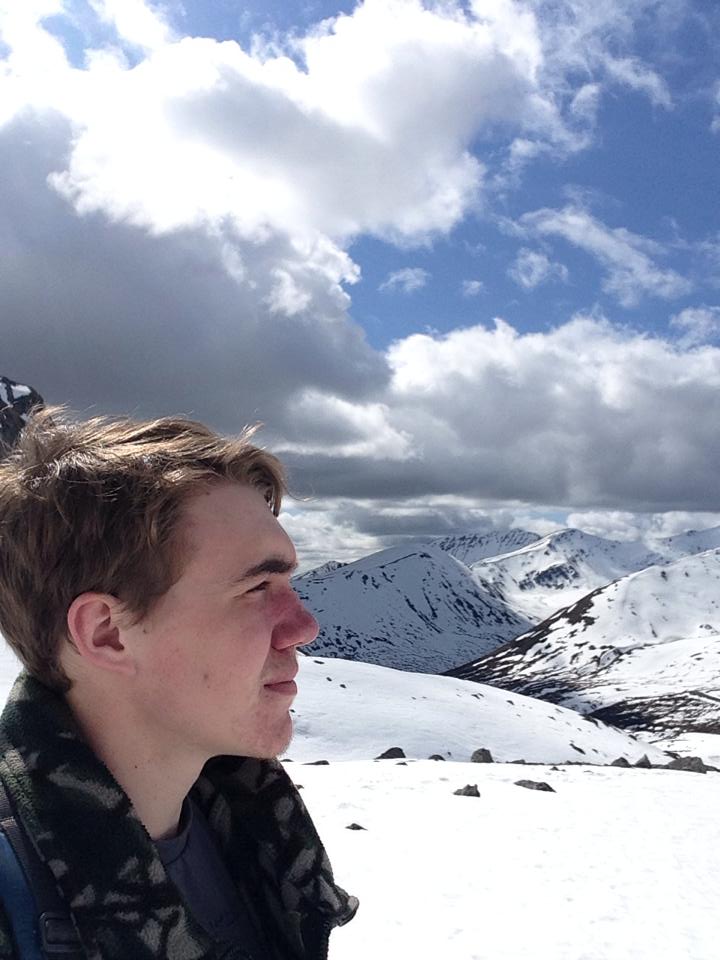 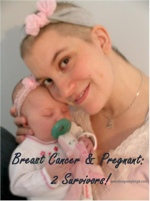 Yesterday was my 31st birthday. Today is my mom’s birthday (I’ll let her tell you how many years ;-)). Two days from now is our country’s 236th birthday. Four days after that is my 3rd cancer-versary. Three days after that is the 3rd anniversary of discovering my youngest child was a girl via ultrasound. If I were to continue with all the meaningful days in July the list would be quite long. The days I listed are days that are important to me and my family. Yet, these days, as wonderful as they are, have all contained sadness as well. Ten years ago on my 21st birthday, I sat and prayed by my late fiance’s bedside as he slowly died of metastatic melanoma at 22 years of age. Three years ago, on my mom’s birthday, I had the horror of undergoing an ultrasound that pre-figured my diagnosis of breast cancer. This ultrasound overshadowed the joy of the sexing ultrasound I mentioned earlier. The Fourth of July that year (2009), saw my family and me twisted with anxiety waiting over the long weekend to schedule my biopsy. These celebratory days have often been anything but joyful, yet each year I look forward to the next because I choose to celebrate God’s gift of life and salvation instead of wallowing in miserable memories.

My husband’s father is Jehovah’s Witness. In their religion, birthdays are not celebrated. I’m not certain about anniversaries (or cancer-versaries) in this religion. Growing up, my husband didn’t get his own birthday party, nor did he get to enjoy other children’s parties. He didn’t celebrate Christmas, Easter, or any of the big holidays. The reasoning is that these holidays and birthdays (anniversaries and cancer-versaries) aren’t mentioned favorably in the bible. While Christmas and Easter are mentioned (although not by these names), the days we’ve set aside for these celebrations is not strictly biblical. Instead, Jehovah’s Witnesses profess that Catholics (and other Christians) are actually celebrating pagan feasts. Many other writers have covered this topic; read here, here, and here for an explanation of both Christmas and Easter dates. Since my husband was basically raised Jehovah’s Witness, he sometimes has difficulty celebrating on these days.

Part of the argument against celebrating birthdays is that those mentioned in Scripture coincide with horrible events. In the Old Testament, Pharoh’s birthday becomes his chief baker’s death day. While in the New Testament, Herod’s birthday becomes the death day of John the Baptizer. Historically speaking, Jews did not note birthday celebrations, but they did honor death days. As a derrivative of death celebrations, early Christians would have been more likely to celebrate Herod’s birthday as the death day of John the Baptizer than to allow it to pass unmentioned. Yet, the New Testament makes no further mention of this date. Yet, early Christian did celebrate Christmas in some fashion in the early 4th century. Once Christmas was established as Christ’s birthday and celebrated, the discussion of celebrating individual birthdays became somewhat moot.

Truly though, the bible does indicate in various areas that births are occasions for feasting and joy, even amid suffering. Only in times of difficulty do Scripture writers renounce the day of their birth (most notably Job and Jeremiah). Yet, in the New Testament, Elizabeth and Zechariah are told that “many will rejoice at his [John the Baptizer’s] birth” when the angel announces Elizabeth’s conception to Zechariah. Yet, we aren’t told exactly when his birth occurred, just as we don’t have a truly biblical/historical date for Christ’s birth. Even without a specific date, we praise God that He sent John ahead of Jesus to begin paving the way for our salvation. Christ spoke favorably of John the Baptizer as well. That is what birthdays are all about — praising God for His gifts of life and remembering His blessings. 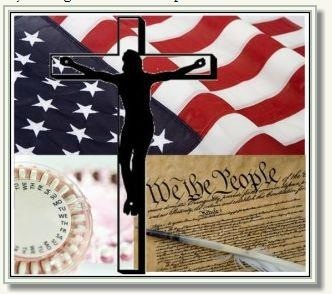 Our country’s birthday is celebrated a scant 2 days from now. That means that we only have 2 days left of our Fortnight of Freedom, it is truly good for us to remember on our nation’s birthday some of the founding principles of our nation. The most obvious ones are life, liberty, and the pursuit of happiness. This blog has already spoken extensively on the HHS Mandate and what it means to us as Catholics and to every American. However, as the nation’s birthday draws near, it seem appropriate to express once more how our Founding Fathers established this nation in an effort to escape oppressive government. We are at a turning point in our nation’s history. If we say nothing and merely stand aside waiting for others, we sentence our children to lives that fall far short of our Founding Fathers’ and Heavenly Father’s intentions for us. Yet, if we band together and stand up for religious freedom, we set a precedent for future generations to follow and continue our country’s freedoms. By standing side by side, whether Catholic, Baptist, Jewish, Jehovah’s Witness, atheist, etc, we can and will make our voices heard. It is time for us to not only celebrate our nation’s birth, but also honor her intentions.

My son turned two the other day. Let the games begin! Ever since he was a newborn, and before the Catholic Church was even a blip on my radar, his birthday made me think of Mary.

It’s interesting to have a child whose birthday is so close to Christmas, because as my son begins his foray into toddlerdom (specifically terrible twodom), my mind can’t help but wonder what the Child whose birth we will soon celebrate was like as a toddler. It’s pretty unfair to compare your kid to Jesus, and I know this… but still, you wonder.

For instance, here’s a few things I’m pretty sure Mary never had to say to toddler Jesus:

“Don’t spit your milk into your Legos. They cost a fortune, and I really don’t want to clean sour milk out of all the nooks and crannies.” (Seriously, why are Legos so expensive?)

“Oh my gosh… did you just color on the dog with a Sharpie?!”

I mean, you could argue that she never said those things because toddler Jesus didn’t have Legos or a Sharpie- but I think my point remains.

It’s also a challenge because you don’t want their birthday to get lost in the Christmas celebrations, either, although it is an awful lot of presents in a small time frame. He’s young still, so I have time to figure out the nuances of explaining, for instance, how buying an over-priced bag of MegaBlocks (can you tell I’m a little bitter about Legos?) is totally a celebration of Jesus’ birth. My top contender at the moment is that I bet if they did have Legos back then, He would have wanted them instead of myrrh. It’s just a hunch I have.

Mostly, at this time I feel a sort of camaraderie with Mary. She had a Son whose birth we’ll soon celebrate, I have a son whose birth is pretty close to her Son’s celebration. That’s really where the similarities end for us. Well, we’re both girls, and she was probably dark-haired, too… So maybe three things?

Anyway, maybe camaraderie wasn’t the right word. Gratitude, more likely. I’m pretty selfish. If Simeon prophesied over my son (after an angel had announced his birth to me, mind you) and then added to me- “A sword shall pierce through your soul”, I would have been like, “Not if we hide out in Gaul it won’t!”

But, Mary didn’t. Sure, maybe she didn’t have to scold toddler Jesus for spitting milk into his Legos AGAIN… But I won’t have to watch my son offered up as a ransom for many.

As my son grows every year, so does my affection for him and Our Lady. When he gets older, I’ll tell him how blessed we are to have her as our Mother, too. In the meantime, I’ll clean the milk out of his Legos and trust him to Mary’s intercession, because unlike me, she didn’t run off to Gaul. And for that reason we have something to celebrate in a week.