Since Pope Emeritus Benedict XVI announced his resignation on February 11, many in the Catholic blogosphere scrambled to share thoughts and insights into what this could mean. We at Catholic Sistas worked quickly to get an afternoon post up to share contributor thoughts and prayers for then Holy Father Pope Benedict XVI.

Dorian Speed had her eyes rightfully set on a much bigger vision. She created Electing the Pope, a website aimed at bringing many Catholic bloggers, including yours truly at Catholic Sistas, together to answer questions about the papacy. The site is easy to navigate, easy to read through, and has many resources linked for continued research. But don’t just take my word for it – I tracked down Dorian and asked her a few questions about the website and its purpose. She had the following to say:

What inspired you to start Electing the Pope?
When I first heard about Benedict XVI’s resignation, I wanted to see what kind of information was already available about how the conclave will work and other related questions. I was frustrated that there weren’t more Catholic sources available. At first, I was just going to write some random blog posts but that didn’t seem to make sense because I myself am far from a “Vatican Insider.” Then I was idly wondering if electingthepope.net had already been registered as a domain name. It was available, and I thought, “well, what would be good to have on a site like that?”

I knew from the beginning it would be a collaborative effort and I’ve been very, very impressed by people’s willingness to participate and to create some very thorough responses to common questions.

What was your initial vision for the website and do you think that is being achieved?
I wanted the site to answer a variety of questions with a unified voice – one that is not overtly evangelizing but is accurate and points people towards more detailed sources of information about Catholicism. It is definitely being achieved, thanks to the efforts of all of our contributors.
Who is the target audience for this initiative?
The target audience is, first, public school teachers who may want to talk to their students about the conclave or assign it as a project topic for a World Religions unit, as it is an event of global significance that would be rightly discussed in a classroom setting. That’s why it is important to me that we are focusing on pretty basic questions about the papacy and about Catholicism in general, and that we are not writing in a first-person voice about our faith but are still providing information that, I hope, will invite people to continue learning about the Church.
Similarly, for reporters who may have been handed this assignment with the directive to “come up with an interesting spin” on the process, having a simple go-to place for accurate research would presumably be helpful. So I suppose it’s a general audience of people who are intrigued by what’s happening right now in the Church, really.
Any additional thoughts or comments?
I can’t overstate how important it has been to have a slate of contributors who are working together to vet one another’s articles and to assist with research and SEO. I’m so honored that these people have stepped up to join this project and I’m amazed at how many questions we’ve already answered in just two weeks. I’d like to see the site possibly mature into a more general “understanding Catholicism” resource, with the same target audience, so I suppose we will see what happens!
.
.

Would you like to submit a question of your own? Dig through the responses page and if you don’t see your question answered, visit the Ask a Question page to submit your own – it’s just that easy!

So, have you adopted a cardinal yet? No, not a bird which incidentally is named after the cardinals of the Church and sometimes the source of confusion as was evidenced by this morning’s exchange with my super cute husband. This fascinating new site allows passers-by to enter their name, e-mail, and a quick code before clicking on “adopt” to see who you will be praying for during the Conclave. I tried it out this morning and I got Gianfranco Cardinal Ravasi from Italy and born in 1942. He became a cardinal in late 2010 and his function is President of the Pontifical Council for Culture. I found out he is actually ON Twitter, and rumor has it he blasts out his own tweets! Quite appropriate that I would get a cardinal who is plugged into social media. 🙂 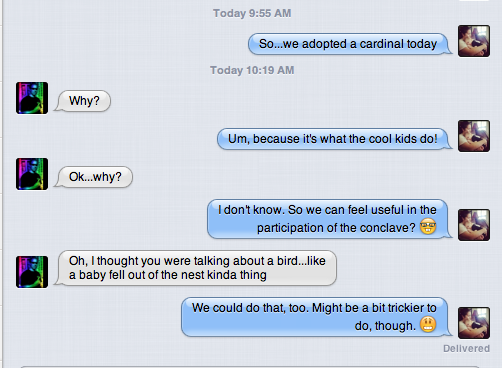