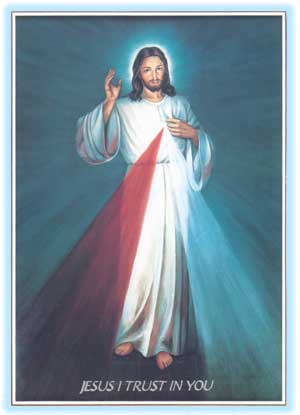 Today’s readings can be found here.

Today’s readings are naturally perfect for Divine Mercy Sunday. In the Gospel we read of Jesus’ amazing return to the apostles after His death on the cross. They were absolutely amazed. Notice also how Jesus’ resurrected body had new powers… he no longer needed to open doors! He could simply appear before the apostles, and that He did! I love St. John’s emphasis on the importance and miraculousness of Jesus’ actions and words here. Christ miraculously appears in the room (something He couldn’t do before), breathes the Holy Spirit upon them, and tells the apostles that He is sending them forth with His power to retain and forgive sins (something the Apostles couldn’t do before).

And in case there would be doubters throughout history, St. John made sure to include the story of St. Thomas. Thomas could not believe his friends when they said the Divine Man who had died, truly, thoroughly, died on the cross, was alive again and among them! Jesus appeared to Thomas too, showing Thomas that yes, the apostles could be trusted in their word about the continued miracles of Christ Jesus. “Blessed are those who have not seen and have believed” says Jesus to Thomas. We learn here that God has specifically designed us humans, in relation to Himself, to have senses that fail at properly detecting the divine, such that we must rely on faith. Yet, we know our faith is based upon facts. Had Thomas not doubted and instead believed, his faith in the apostles’ words that Christ had reappeared to them would not have been founded upon fallacy. St. John tells us at the conclusion of this reading that not all of Jesus’ signs were written down. Examples were written down to aid in our faith, but those that were not written down did not happen any less (an example of Catholic Sacred Tradition).

Our senses often fail us in the two important Sacraments of Reconciliation and the Eucharist. We know from the gospel of St. John in today’s readings, that Jesus has given special powers to the apostles. Sadly, many people avoid the confessional because they “Don’t need to confess their sins to another human”, they instead “can go directly to God!” without realizing that going to confession, is exactly that, going directly to God. Our priests today, by apostolic succession, have received the powers to forgive and retain sins, but this is not of their own. Instead, it is that they are lending their bodies to God, and when it is we hear the words of absolution, this is not of our confessor, it is in fact of our Lord, Jesus Christ! Catholics today also greatly struggle with the Real Presence of Christ in the Eucharist, and St. John made sure to include proof of this teaching as well in his sixth chapter so that we may believe. If we need Jesus to come to us specifically and verify for us that these things are true, then how much faith are we really operating on? Certainly not a faith built on trust.

This Divine Mercy Sunday, we reflect on our faith built on trust.

“O Blood and Water, which gushed forth from the Heart of Jesus as a fountain of Mercy for us, I trust in You!” – Chaplet of Divine Mercy