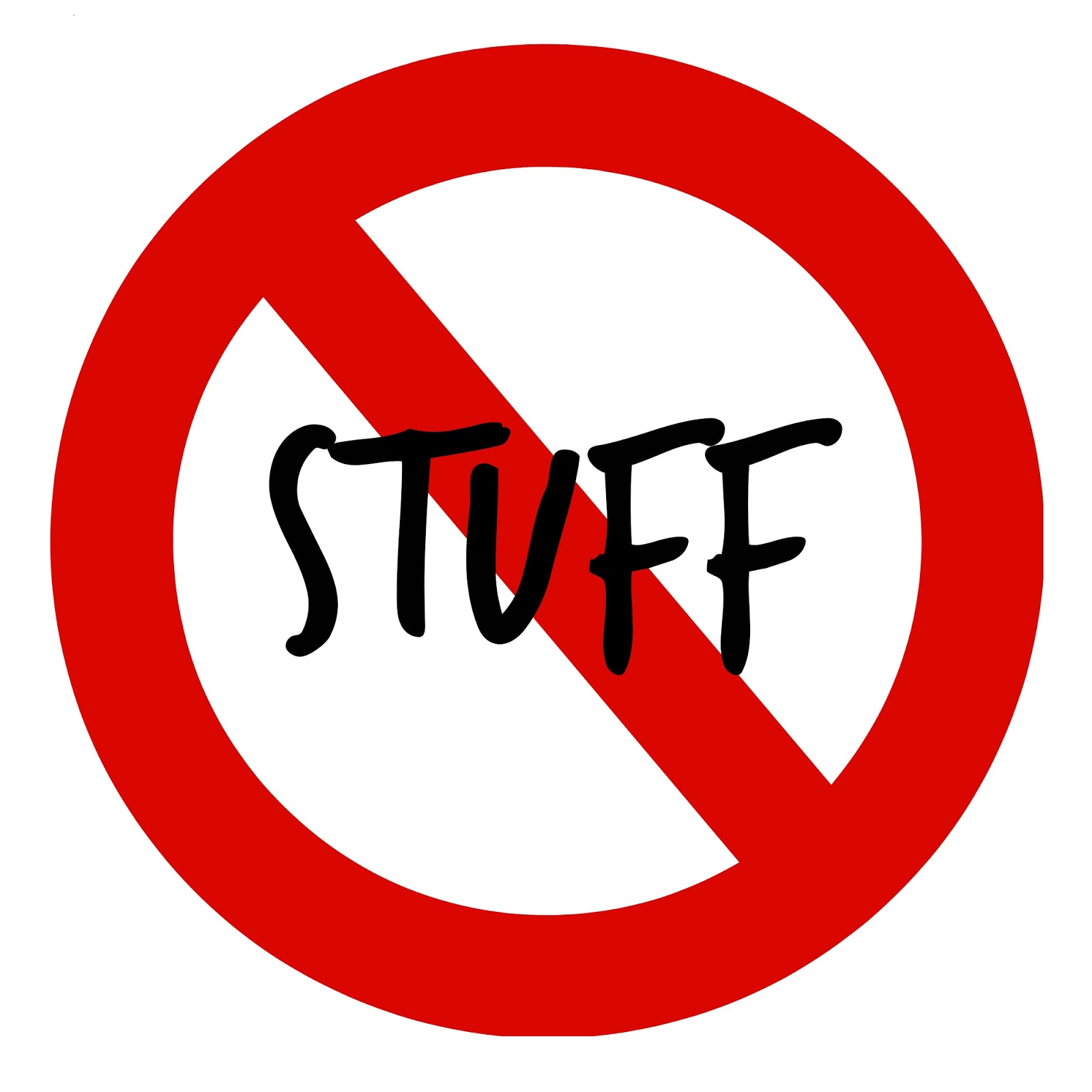 You all know the drill–every December, stuff starts to find its way into your house. You throw a Christmas party and people bring you hostess gifts. You do a gift exchange at work and bring home more kitsch. Then there’s Christmas morning, plus the rounds to the relatives’ houses where you collect more stuff to bring home. And don’t forget the decorations…and cookie plates…and Christmas cards with pictures of your nieces and nephews that you feel compelled to display.

By the New Year, you’re irritable and overwhelmed. And it’s not just the lack of sunlight or the extra 10 pounds you’ve put on from all the cookies, but a culprit that too often goes unnoticed–STUFF. Also known as clutter, junk, or (my favorite) trappings. It’s the STUFF that’s making you crazy, sisters…the endless amount of soul-sucking stuff that you’ve so insidiously gained over the past few months (and years).

Four years ago, I got a crash course in embracing a simpler life when my husband got a job in Alaska. His employer would only pay to transport 15,000 pounds of household goods (plus two cars) and anything over that would be at our expense. And since it is exorbitantly expensive to ship to Alaska, I began to daunting task of purging our then 4,000-square foot house of everything but the bare necessities.

The first to go was the trash. Yes, trash. I had a huge dumpster delivered that I filled with broken-beyond-repair furniture, broken toys, rusted outdoor patio furniture, and clothes that were too decrepit even for Goodwill. (I suspect most of us have a lot of “trash” like this around the house.) I was ruthless when deciding what to toss, especially with paperwork; I purged a four-drawer filing cabinet and got necessary papers down into a single, portable accordion file. We also had four large boxes of DVDs, many of which we had not watched in years. I ordered a CD wallet and trashed the cases. I also donated nearly three boxes of movies to the library. If we were just dying to watch one of those movies in the future, we could rent it from Netflix or Amazon.

One of our biggest hurdles was what to do with the thousands of books we had accumulated over the past 20 years. (What’s your collection?) I was an English major in college and my husband and children are also avid readers. I hauled nearly 20 enormous boxes of books to our local library, which happened to be having a fundraising sale the next month. I kept the ones I would likely need in the next three years to homeschool—and even then, I only kept ones I imagined would be difficult to get from a rural library. We went from 30 shelves of books down to three.

Clothing was another sore spot. With four children, including three girls I had stockpiled clothing for season after season, I had walk-in closets and dressers bursting at the seams. I hoped we’d have more children, but realized that if God sends more, He will also send the means to care for them (and He did, as you can read here). So I donated seven years’ worth of boys’ clothing to a friend pregnant with her first son, as well as countless boxes of girls’ clothing to Goodwill and friends with daughters. Each of my children were allowed to keep only the immediate season’s clothing, and then only what would fit into a medium-sized suitcase. I allowed them to keep just two pairs of shoes—snowboots and everyday shoes. I did the same for me and my husband, both with clothing and shoes. If we could not carry it to Alaska in a suitcase, it didn’t come.

I went through all linens in our home and anything that was frayed, torn, or stained got trashed or donated. I even got rid of a beautiful set of Christmas china. My wedding china is plain white and I can easily dress it up with a festive tablecloth and accessories.

Furniture-wise, I gave away the farm. Our new home was about half the size of our Virginia home, so I donated two bedroom suites, a rolltop computer desk and chair, a filing cabinet, a piano keyboard, a sectional sofa, and two sets of dining room tables and chairs. I realized that all the extra space did was encourage me to fill it up with stuff; I’d created endless specialized areas in the house, such as a guest room that was used just twice a year (if that), a basement “den” that was really just a second family room, and a sewing area that had bled into two rooms. I went through my fabrics and gave away all the projects I had lost interest in and was realistically never going to finish. Which basically ended my quilting hobby.

I also purged the countless things relatives had given me that was simply not “me.” Like the handmade lace from France or llama-hair blanket they’d purchased for us on one of their many international trips. Regardless of how expensive it was, it was donated to a friend, to Goodwill, or got put into the yardsale I had that fall unless I just loved it.

My criteria for keep something was:

What was interesting to me was the spiritual evolution that occurred in my heart as we unloaded the extra stuff. When I began to purge for the move to Alaska, I realized the pantry was the one room where I had gone overboard. I was a major packrat  in just one room. In addition to the pantry, I had a full-sized fridge and a full-sized freezer in the garage stuffed with food, too.

When we’d built our Virginia house five years earlier, I had insisted on a huge, walk-in pantry the size of most folks’ living rooms. Over time, I had filled nearly 20 shelves with extra food and household goods. I would often buy in bulk when things were on sale and reasoned that I was serving my family by doing so. We enjoyed good food and had what we needed all the time because I caught good sales. Or so I told myself. 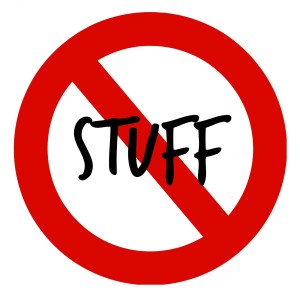 I thought a lot about these areas…why did I accumulate so much food but hated clutter everywhere else? After much prayer and soul searching, however, I realized that the pantry symbolized security for me. I had grown up in a severely impoverished family and we often went hungry. The scared, hungry little girl in me hoarded food as a way to feel safe. And I had to face the ugly truth that my food hoarding was a sign that I did not trust the Lord to provide all my needs in the future.

So I purged the pantry too. I gave away everything but what we could eat in the two months before we left the state. It was scary to walk in there and see it so bare and I had some white-knuckled grocery trips for perishables where I had to face down the urge to buy more, but I did it. Our current home has a closet-sized pantry and I now limit our food to what can fit in there. I no longer have a crammed, full-sized freezer in the garage. I buy meats when on sale, but I don’t buy six months’ worth…I simply trust that God will provide another sale on hamburger before we all starve.

This was a major turning point for me and it would not have happened if we had not moved to Alaska, which forced me to examine all my stuff, including consumables.

When I was done, I had made 20 trips to the library, 9 trips to Goodwill, had an enormous yardsale, gave away tons of furniture to charities, donated to at least 15 friends, and filled 4 huge dumpsters with trash. The best part was when I did the walk-through with the moving company a week before we left—they estimated we only had 10,000 pounds worth of household goods to move!

I’ve worked hard since the move to ensure that the soul-sucking stuff doesn’t find its way back into our lives. I now know that if I get to the end of a day and I’ve neglected my prayer life, it’s usually because I’ve spent too much time maintaining extra clothes or toys or books. Sometimes, less (stuff) really is more (grace).

As we approach Advent and Christmas, let’s work to clear the clutter of our homes so that our minds can be at peace. Then, we’ll have the space in our homes and hearts to ponder the incomparable gift of God becoming a man to save us from our sins. To that end, sisters, what’s your best tip for living the simple life, not just during the Christmas season but all year long?

9 Replies to “For a Simpler Life, Get Rid of Your Soul-Sucking STUFF”