It’s October, and that means that Respect Life Month is once again upon us. This is a time for us to be extra mindful of the ways in which the dignity of human life is being violated in our culture, and to increase our pro-life efforts. Pro-choice people often accuse pro-life people of being hypocritical – of only paying lip service to “respect for life,” but not really living it out. While this accusation is way off-base, it’s easy to fall into the trap of thinking that we are doing our part in building a culture of life just by sharing articles and memes on Facebook, or debating life issues with pro-choicers. But being pro-life (just like being Catholic) is about more than what we intellectually hold true and defend with our words. It’s very much about how we live, every day of our lives.

If we were to believe the “other side,” then the only way we truly could “walk the walk” of being pro-life would be to personally adopt all the babies who otherwise would be aborted, or the older children currently in the foster care system (like this amazing hero*). Of course adoption is an incredibly loving act, but it’s not possible for everyone. For the vast majority of us who will never be able to adopt a child into our family, there are many other ways that we can and should be living out our pro-life ideals. This list gives ideas that go beyond what most people typically think of as “pro-life activities,” like standing outside abortion clinics and lobbying our elected officials.

We also need to be careful about how we are parenting in general. Some people might say that only “x” or “y” parenting style is a truly respectful way to treat our children. I’m not going to burden anyone’s conscience by speaking in absolutes about parenting techniques; but, we do need to ask ourselves if the way we interact with our children is in keeping with their dignity and value. Do we deal with them in a way that builds them up, or in a way that tears them down? Do we imitate the love that God the Father has for us, which is unconditional and ever-merciful, or do we remove our love when our children disappoint us? Will our children grow up knowing that it is good that they exist—that all lives are inherently valuable—or will they feel like they have been a burden? I’m no saint in this department; I fail multiple times a day at treating my children as the precious blessings that they are. But when I do, I always try to apologize and start fresh. 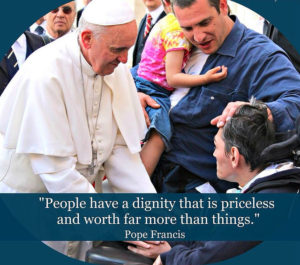 6. Reaching out to the aged, infirm, and imprisoned – We know that being pro-life is not just about babies. The elderly and ill are particularly under attack in our culture of death as well. And while we are using the Death Penalty less and less, we often still look at and treat prisoners as less-than-human. We can affirm the dignity of people in these groups by doing things such as visiting nursing homes, hospitals, and jails (parishes often have specific ministries for these activities), or writing letters/making cards (or having our children make cards – who doesn’t love the sweet drawings and handwriting of a child?). These things offer hope to those who are in situations that often seem hopeless, by telling them that someone values them, even if our society doesn’t.

7. Donating blood – I’ve never given blood, but today I read this incredible story about a man* whose blood has saved millions of babies (literally) and I was inspired to mention it here. Donating organs is also a heroically pro-life act, as long as it is done ethically.**

This was by no means an exhaustive list of the ways that we can live out on a daily basis our belief in the dignity of all human beings. Any time we treat others with the virtue of charity (which is always grounded in Truth, not in relativism), we are behaving in a “pro-life” manner. And we are showing them the face of the One in whose image they were made and from whom they derive their worth and dignity.

*I have no idea if the men in these stories would identify as “pro-life” or not – but their actions definitely fall under that category.

**For some information on ethical questions about organ donation, go here, here, and here.

4 Replies to “Seven ways to build a culture of life”