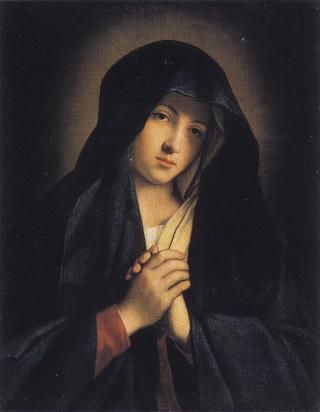 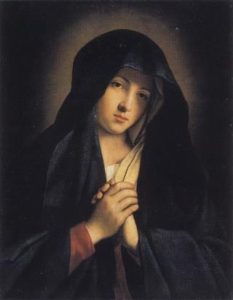 Earlier this week I began turning over my ideas for this month’s Seven Quick Takes and started thinking about titling it, The Seven Faces of Mary. How would a post like this look? I wondered. Perhaps I could choose seven of the many, many beautiful renderings of Mary. Or maybe I could feature seven devotions to Mary. (Just how many of them are there anyway?) Through my research, I stumbled on a devotion and feast day I was not aware of, though I had recollections of the title: The Seven Sorrows of Mary.

Of course my first question was “What are the seven sorrows of Mary?” One is obvious, but what were the other six? It turns out most of these sorrows are based on events in Mary’s life and taken from the Bible; the fourth sorrow is based on the fourth Station of the Cross, where Jesus meets his sorrowful Mother.

The Seven Sorrows of Mary (sometimes referred to as The Seven Dolors) include:

First Sorrow: The Prophecy of Simeon

During the presentation of Jesus in the temple, Scripture tells us, “Then Simeon blessed them and said to his mother Mary, ‘This child is destined for the falling and the rising of many in Israel, and to be a sign that will be opposed  so that the inner thoughts of many will be revealed—and a sword will pierce your own soul too. ‘” (Luke 2:34-35)

Second Sorrow: The Flight in Egypt

“Now when they had departed, behold an angel of the Lord appeared to Joseph in a dream and said, ‘Rise, take the child and his mother, and flee to Egypt, and remain there till I tell you: for Herod is about to search for the child, to destroy him. ‘” (Mathew 2:13)

Third Sorrow: The Loss of the Child Jesus in the Temple

“…. and when the feast was ended, as they were returning, the boy Jesus stayed behind in Jerusalem. His parents did not know it,  but supposing him to be in the company they went a day’s journey, and they sought him among their kinsfolk and acquaintances; and when they did not find him, they returned to Jerusalem, seeking him.” (Luke 2:43-45)

Fourth Sorrow: Mary meets Jesus on the Way to Calvary

This sorrow is based on the fourth station of the Stations of the Cross, when Jesus meets his afflicted Mother while carrying His cross.

“When the soldiers had crucified Jesus, they took his garments and made four parts, one for each soldier; also his tunic. But the tunic was without seam, woven from top to bottom; so they said to one another, ‘Let us not tear it, but cast lots for it to see whose it shall be.’ This was to fulfill the Scripture, ‘They parted my garments among them, and for my clothing they cast lots.’  So the soldiers did this. But standing by the cross of Jesus were his mother, and his mother’s sister, Mary the wife of Clopas, and Mary Mag′dalene. (John 19:23-25)

Sixth Sorrow:  The Piercing of the Side of Jesus and Mary Receiving the Body of Jesus in her Arms

“So the soldiers came and broke the legs of the first, and of the other who had been crucified with him; but when they came to Jesus and saw that he was already dead, they did not break his legs. But one of the soldiers pierced his side with a spear, and at once there came out blood and water. He who saw it has borne witness—his testimony is true, and he knows that he tells the truth—that you also may believe. For these things took place that the Scripture might be fulfilled, ‘Not a bone of him shall be broken.’ And again another Scripture says, ‘They shall look on him whom they have pierced.'” (John 19:32-37)

Seventh Sorrow: The Body of Jesus is Placed in the Tomb

“They took the body of Jesus, and bound it in linen cloths with the spices, as is the burial custom of the Jews. Now in the place where he was crucified there was a garden, and in the garden a new tomb where no one had ever been laid. So because of the Jewish day of Preparation, as the tomb was close at hand, they laid Jesus there.” (John 19:40-42)

This Marian feast day, which was originated by a provincial synod of Cologne in 1423 in response to the Hussite iconoclasts, was made official by Pope Pius VII in 1815. For a time, this feast had two dates for celebration: 1) the Friday before Good Friday, and 2) September 15th. Today it is largely celebrated on the latter date. So this month might be a great time to learn more about the Seven Sorrows of Mary and the graces attributed to it. 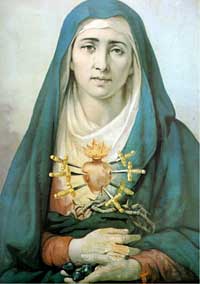 Our Lady of Quito

One Reply to “Seven Quick Takes: The Seven Sorrows of Mary”