I had been married for less than a year when my husband told me he wanted to be a police officer. In other words, he wanted to leave the house every day and walk into danger, on purpose. This was never part of the plan. When we were engaged, he was planning to be a history teacher. Before we got married, he threw that idea out the window and didn’t replace it with anything right away. He simply kept doing his summer job of working as a land surveyor. It was hardly a job that suited his gifts or would support a potentially large family. So, I knew that he was looking for a job change, a long-term career. But police work? Not on my radar at all. Watching my husband strap on a bullet-proof vest and a gun and go out into the unknown each day/night was not what I signed up for when I said my vows. 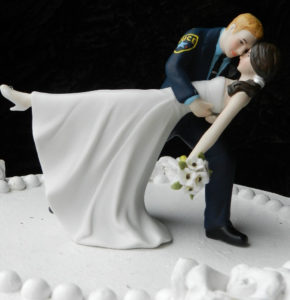 Traditional wedding vows are pretty comprehensive. Standing at that altar in front of God, and pretty much everyone I loved, I promised to be true to my husband for richer or poorer, in sickness and in health, in good times and in bad, as long as we both shall live. I promised to love him no matter what. I signed up for a lifetime of commitment regardless of the curveballs life – or my husband – threw at us. I didn’t know it at the time, but I definitely was signing up for being a police wife. I was signing up for the intense worry, the sleepless and lonely nights, the dreaded “I’m at the hospital” call, the holidays and anniversaries and weekends alone, the hatred of society. I signed up for it, because I signed up for loving my husband, standing by his side, being faithful until death. There were no exception clauses in our vows. There was only a total gift of self, without reservation.

That’s not to say that I was agreeing that he could do whatever he wanted while I just accepted it without question. Becoming a police officer was not so much about what he wanted, but about what God was calling him to do. I couldn’t stand in his way because I couldn’t stand between him and God. I love my husband more than I love getting my own way; more importantly, I love God and want to follow his plans for our life more than I love the {false} sense of security and the relative tranquility that I had before my husband became a cop. If I had told my husband that I would absolutely not agree to him becoming a police officer, I know that he would have respected that (albeit begrudgingly). He wouldn’t have thrown away our relationship to get his own way. But I don’t think I could have lived with myself if I had tried to come between my husband and God like that.

None of us knows what we’re really signing up for when we get married. Even if a couple lives together before marriage, they aren’t going to learn everything there is to know about their mate before the wedding, and they definitely aren’t going to ensure that there are no unexpected occurrences somewhere down the road. I laugh (and maybe cry a little inside) when people act as if cohabiting ensures that there won’t be any surprises or unforeseen disappointments about their spouses or their marriage. Cohabitation doesn’t divorce-proof your marriage; but it could get you into the mindset that your commitment is conditional. You think you know all the important stuff about your intended spouse, so marriage is a “safe” endeavor. And what happens when something changes after marriage – as it inevitably will? What happens if your healthy spouse has an accident and becomes disabled, or develops a chronic debilitating illness? What happens if postpartum depression kicks in and turns your wife into a different woman than the one who you signed up to spend your life with? What happens if your teacher-turned-land-surveyor husband says God is calling him to police work?

Living with someone tells you whether or not he throws his dirty socks on the floor, eats all the leftovers that you were hoping to share, or wakes up in the morning with an attitude and bad hair. But these things have nothing to do with whether or not your marriage is going to work out. A Marriage works out when two imperfect people come together realizing that they are each imperfect, and not expecting perfection out of the other. It works out when those two people decide that no matter what surprises and challenges arise, they are going to love each through it all. It works out when each spouse recognizes Who, and Whose plans, come first in the relationship (hint: It’s God, and God’s plans).

Sometimes when I’m fed up with the police-wife life, and am feeling a bit sorry for myself, I do say to myself that “I didn’t sign up for this.” Then God reminds me that I did. Did I really mean the vows that I said that day in St. Anthony church? Yes? Then, I signed up for this. I also signed up for a lifetime of special graces, by virtue of receiving the Sacrament of Matrimony (graces that are not present when two people are simply cohabiting). In order to open myself up to those graces, I need to put an end to the self-pity.

I think it’s a function of God’s perfect Wisdom that we can’t know ahead of time all of our spouses’ imperfections or all the challenges that we will face during our lives together. If we could foresee all that, would we still want to get married? Perhaps it would depend on whether God also showed us the graces he would pour out on our marriages, the growth that would result from the challenges, and the depth our married love would gain after being tested in fire. Those, too, are things we can’t anticipate before we get married, and never would be made manifest in the “trial run” of living together. When you say your vows, you sign up for unimaginable sorrows, but fathomless joys; deep valleys, but towering peaks (and a lot of flat terrain in between).

My husband I celebrated nine years of marriage yesterday. I didn’t know when we got married that I was signing up to be a police wife. But if I had known, I still would have done it. Being married to a cop is not all sunshine and roses; but being married to my cop is something that I wouldn’t trade for the world.