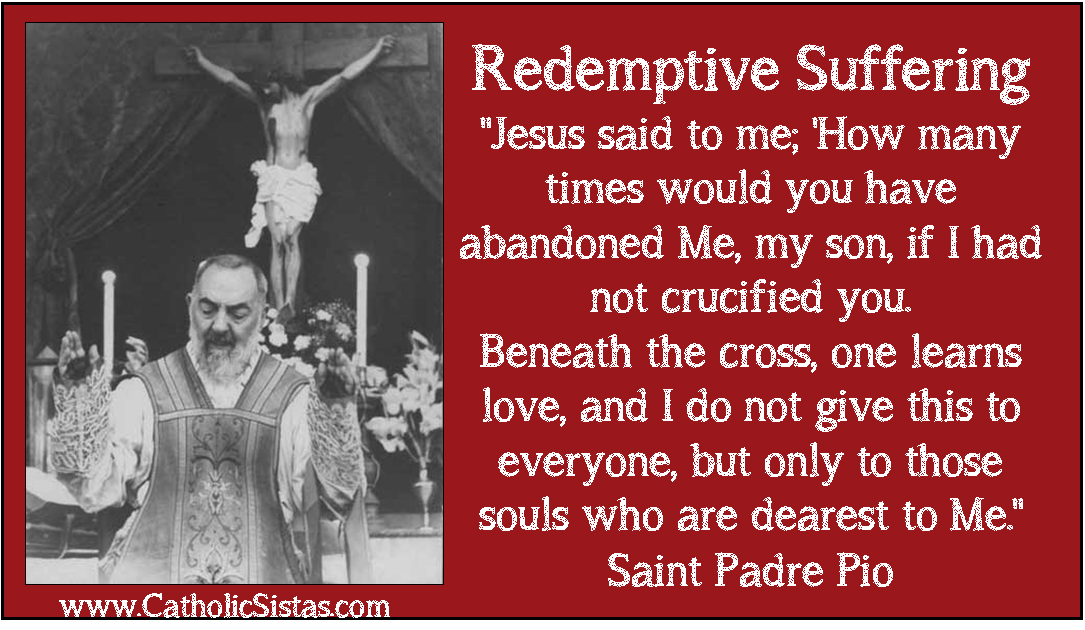 As we walked back into my homeroom classroom and my seventh graders marched in the door to their seats, they knew my mood had changed.  Erasing everything from the board I wrote in capital letters:

Then I turned around and waited as everyone took their seats quickly and quietly.  With a perfectly-serious-teacher-face I asked, “Can someone read this word, please?”  Marisol raised her hand first, as usual, and when called on she said, “sacrifice.”  “Perfect!” I said, “now could someone please give me the definition of this word, please?”  A bunch of hands shot up in the air, I called on three or four and the definitions were spot on.    Some said, “the state or experience where one suffers,”  others gave some version of “suffering pain.”  “So most if not all of you know the definition of this word, very good.”  (I cracked a half smile.)  “So when you think of this word, who is the first person that comes to mind?”  Thankfully, most hands shot into the air and I gave a nod which they knew meant “go ahead give me the answer” and in unison, all the children ages thirteen and fourteen who, by the way, were preparing for the Sacrament of Confirmation that same year, shouted “Jesus Christ!”  “That is right,” I confirmed, but proceeded with, “so why is it so hard for young ladies and gentlemen to kneel for a holy hour in honor of our Lord and Savior at Adoration?  Why is it that you can’t make it through without complaining, or whining, or slouching?  What is it that He has to do more for you, besides giving up His life and giving you Salvation, so that you can offer Him some sort of sacrifice?”

Some students looked down to the floor in shame.  They realized that the question that their eight-month-then-pregnant homeroom teacher was asking was a valid one.  I let the room go silent for some time.  Then I asked the children to take out their journals and write this word at the top.  They were to write as many words that came to mind when they thought of this word.  The bell rang before we could discuss this any further which was fine, I prayed the Holy Ghost would plant a seed in their young hearts.

The next day was Mass, a Friday, when the Consecration came all of the children in my homeroom class knelt almost on cue, it really looked rehearsed.  They remained on their knees until Communion time, some went up, others didn’t which wasn’t common.  “Good, I thought, they are examining their conscience from the event the day prior.”  When they returned to their pews, they all knelt again and remained there until the Blessed Sacrament was back in the Tabernacle and Father sat down.  All remained focused in prayer, with eyes closed and hands folded, even the ones that didn’t receive.  When we got back to class, they all sat waiting for our mini lesson to resume.  I wrote on the board in big letters:

“REDEMPTIVE  SUFFERING”
and in smaller print
“thank you”

This happened seven years ago.  It was the only time I ever spoke to my beloved students about this – after all, I was their Language Arts teacher, not their religion teacher – but it was a Catholic School, so I took the liberty to talk with them about something that maybe hadn’t been shared or spoken about in religion class or at home.  This past week, my home was in the path of the “frankenstorm” Sandy and we suffered a power outage from Monday around 8:30pm.  Being a native of Florida, we were prepared for this Category One storm as if it was a Category Five.  Candles went on immediately and each child received a small flash light in hand.  Initially, my thoughts went to “Dear Lord, bring our power back as soon as possible” but as the night went on and the storm passed our home making the trees, windows, and roof creak in all sorts of ways I’d never thought possible, I was given time to think about this further.  As I laid in the dark, children all around me in sleeping bags in our bedroom.  Our five kids feel asleep right away, they were sound asleep, had no worries, my husband and I had made them feel very safe despite the situation.  This didn’t mean we weren’t worried ourselves, as we had to come up with creative and resourceful ways of how would we flush toilets, take showers, eat food, you know the basics needed with children age fourteen, seven, six, four, and two.

We were able to endure three nights without power; sporadically I gave updates on my cell phone on Facebook or through instant message with family and close friends.  “I’m praying you get power soon,” they said.  We spent two nights without heat; it was about 40 outside, maybe a little colder, I wasn’t sure.  The first night of the cold was the moment when this classroom scene came to mind and I realized what a wonderful opportunity these next couple of nights would bring for our souls.  I had two choices, complain, and cry or endure it with a smile and some prayers.  Okay, I didn’t really smile, but I did offer my coldness for those poor souls in Purgatory, for my friends whom are enduring real suffering, and for those families in New York and New Jersey who were left with nothing but the clothes on their backs and lost loved ones.  So with flashlight in hand, I grabbed my Bible and flipped it open, a smile did come to my face when I read Job 2:10, “… if we have received good things at the hand of God, why should we not receive evil?”

Suffering and sacrifice seem like such foreign words to us these days.  Everything is instant and easy.  Suffering or sacrificing to many religions is seen as a sign of fortitude or strength.  In Christianity, like the children in my homeroom shouted back in 2006, Christ was the ultimate example of Redemptive Suffering.  We are ALL called to be saints, we are all to share in the holy priesthood of Christ, our spotless victim, and together we make up the mystical body of Christ.  We are called to be non-ministerial priests which in essence means to offer ourselves up for something or someone constantly, after all, that is why God created us.  Our works, joys, pains, sufferings, praise, gratitude, and work should be offered over to God in all we do and say, especially in those hardest of times.  When we do this, we take part in the Divine Nature of Christ, we share the fruits of Calvary.

If Christ suffered in His human nature, why should we be spared?  The Passion of the Christ by Mel Gibson offers us a vivid image of Christ’s suffering even to the point of sweating blood in the Garden.  Our imitating Him strengthens the body of Christ, the Holy Church.  Paul tells us this in I Corinthians 12:26, “And if one member suffer any thing, all the members suffer with it: or if one member glory, all the members rejoice with it.”  By these actions of redemptive suffering, we are coordinating with God in very profound and spiritual ways and it will benefit others.  Think about it, when a friend suffers just a little for you, it builds you up.  Parents who suffer for their children, children who suffer the loss of a parent, or those of die a happy death.  When I think of this I also think of the victim souls like those saints who shared in the suffering of Christ through the Stigmata.  When they faced this “cross” they embraced and then used it to “offer it up” for others. 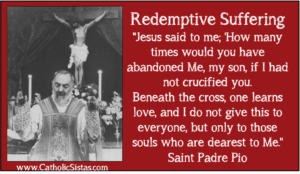 My favorite saint taught me so much about redemptive suffering in her book, Story of a Soul.  Saint Therese said, on page 27:

“I understood that to become a saint one had to suffer much, seek out always the most perfect thing to do, and forget self. I understood, too, that there are many degrees of perfection and each soul was free to respond to the advances of the Our Lord, to do little or much for Him, in a word, to choose among the sacrifices He was asking. Then, as in the days of my childhood, I cried out: ‘My God I choose all!’ I do not want to be a saint by halves. I’m not afraid to suffer for You. I fear only one thing: to keep my own will; so take it, for I choose all that You will!”

I invite you to embrace your crosses and offer them for others.  It brings so much healing for yourself, brings you closer to God, and it is so pleasing to the heart and soul when you hear a friend whom you have suffered for also is healed in some way.  Saint Catherine of Siena summed this up best when she said, “The only cause of my death is my zeal for the Church of God, which devours and consumes me. Accept, O Lord, the sacrifice of my life for the Mystical Body of Thy holy Church.”

Be joyful in your redemptive suffering, my brothers and sisters in Christ because the rewards are priceless!
For further reading on Sacrifice and Martyrdom:

The Eucharist, Mary, and Redemptive Suffering by Shane Kapler on Catholic Exchange.

To Love and To Suffer, the Science of Saints on Religious Vocations.com

6 Replies to “Redemptive Suffering: The Ultimate Act of Love”