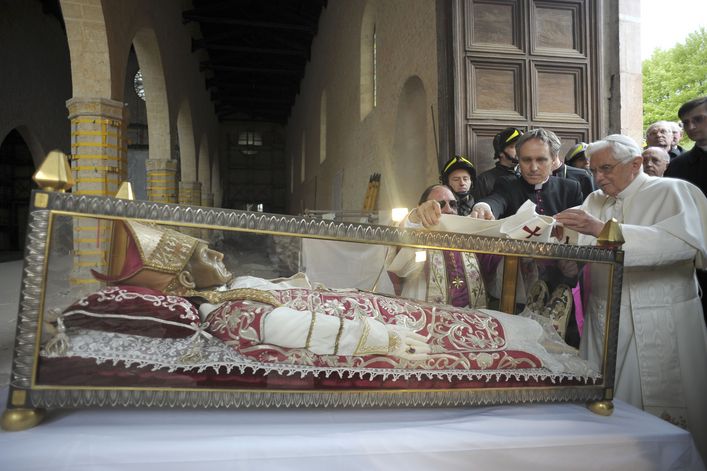 The historic news of the resignation of Pope Benedict XVI came as a surprise to laity and Church leaders alike; he will be only the 5th pope to do so, in the history of the Church founded by Jesus Himself. Faithful Catholics had reveled in the firm yet gentle reign of our German Shepherd as he worked diligently to reform the reform of the Church. The reversion back to a more accurate translation of Mass responses, prayers, and form was met with a tepid response by modernists but those of us who take pride in our ancient practices were heartened to have more solemnity and reverence reintroduced into the living sacrifice that is the Holy Mass. As a German myself, I felt a kinship with Papa Benedict and found myself smiling and nodding whenever he spoke or wrote about all things Catholic.

He was also a staunch protector of the unborn and reiterated time and again the supreme importance of the sanctity of life. As a pro-life advocate, I found myself frequently quoting a never ending supply of his pronouncements on the subject. The poor and forgotten were also consistently championed by him as were all people, regardless of religious affiliation. He worked tirelessly and traveled extensively with no regard for his personal safety or comfort but was greeted with joyful welcome wherever he went. I prayed, on a regular basis, that he would be with us for many years to come, as I saw the Church begin flourishing in renewal under his reign.

What we are seeing in retrospect, however, is that there had been clues to be found, pointing toward this unusual step he has taken. On April 29, 2009, few pundits or faithful took particular notice when Pope Benedict visited the tomb of Pope St. Celestine V in Aquila, Italy. Celestine was a rather obscure medieval Pope, whose reign began in 1294. As was the case with Josef Cardinal  Ratizinger (aged 78 at the time of election), Fr. Pietro Angelerio was a devout and holy priest who was also reluctant to become Pope at an advanced age (he was 80). In fact, just a brief five months after his election, Pope Celestine V issued a formal decree that allowed popes to resign. Shortly afterward, he exercised that right.

We can now look back and remember that Pope Benedict XVI prayed and then left his palluim on top of Celestine’s tomb. The leaving of the symbol of his episcopal authority as Bishop of Rome appears to have had significance that was lost on the world at the time. Additionally, he went out of his way to visit and pray in the Cathedral of Sulmona fifteen months later. There reside the relics of the same St. Celestine V. It would be a stretch to attribute these actions as mere coincidence, given today’s news, since they point toward a spiritual journey leading to his decision to step aside. Considering Pope Benedict’s analytical style of thought and his thorough attention to detail gives these actions new meaning in light of the announcement made today. Although the obvious symbolism is not lost to us, we now see a deeper more profound intent come to light. Pope Benedict XVI was signalling his intention to resign and the minor rumors that had arisen a few months prior, bear more weight now that his decision has been announced.

On a very human level I feel bereft, as if some indispensable member of my family is moving far away.This pope, with his gentle yet firm hand, has been one to whom I could relate so well. Our German Shepherd’s words and writings resonated with me as if he were my own Opa (grandfather). I love him with a depth that surprises me and pray that the twilight of his years will be spent in the peace that comes from a job well done. He has served us well and his toil for the people of God will stand the test of time. Well done, good and faithful servant. You have given me the gift of a deeper faith and a stronger determination for serving the Church founded by Christ Himself. ‘And the gates of hell will not prevail against her!’. Vielen Dank und möge Gott Sie segnen*.

‎”After the three days of darkness, St. Peter and St. Paul, having come down from Heaven, will preach in the whole world and designate a new Pope. A great light will flash from their bodies and will settle upon the cardinal who is to become Pope. Christianity, then, will spread throughout the world. He is the Holy Pontiff, chosen by God to withstand the storm. At the end, he will have the gift of miracles, and his name shall be praised over the whole earth. Whole nations will come back to the Church and the face of the earth will be renewed. Russia, England, and China will come into the Church.” (Prophecy of Blessed Anna Maria Taigi (1769-1837 A.D.) who was Beatified by Pope Bendedict XV in 1920.)

*Many thanks and may God greatly bless you!