Conversion stories have always been considered the realm of RCIA—how did someone come to yearn to “come home” to Rome? What person, what circumstances led him or her to realize what was missing in life?

This conversion story is different—it’s that of a cradle Catholic (with 12 years of Baltimore Franciscan education) who finally found the Truth about the Church in my vocation of medicine.

It was Fall 1995—married for five years, mother of two young sons, in my first years of part-time family medicine practice in a small town in south central Pennsylvania, attending Eucharistic adoration, member of the prolife committee at our parish. What needs conversion here, you may ask?

The answer I didn’t want to hear came from an insert in our parish bulletin from Priests for Life, asking prayer for doctors who prescribed birth control pills which could cause an abortion. That’s a hard one to read and stay seated quietly in the pew! I firmly believed I was already on the right side of this issue—I’ve been against abortion as long as I could remember. Why did I need prayers?

The next meeting of the prolife committee was interesting. I was assured that I was still welcome—of course, doctors had to prescribe the Pill and this was just the pastor’s personal opinion, not that of the parish. Somehow I didn’t feel better.

October 1995 was Pope John Paul II’s visit to Baltimore. We saw the Holy Father along the parade route while in town for a wedding. Imagine my chagrin at seeing a sign, “Holy Father, we are entirely in agreement with your faithful teachings.” I felt under attack. What to do now?

I really liked our pastor, and wanted to educate him on how he had to be wrong. My journey found me driving to the nearest med center library to pull and photocopy journal articles (days before the internet!) I became convinced that there WAS a chance that the Pill could cause an early abortion. But who practiced this way—not prescribing the Pill?

God was as persistent as I was stubborn in acknowledging His plan. In our driveway landed a sample copy of a local newspaper. I opened it to see an ad for an obstetrician opening up a NFP only medical practice nearby. Really. I was becoming paranoid about being pursued like this.

During this time, my husband and I were led to use NFP in our own marriage after hearing a talk by our same pastor during a marriage prep session where we volunteered—how to give God room to move in a marriage.

Much prayer followed. Finally, with fingers shaking, I called my parish to make an appointment with the pastor to discuss this and make my Confession. I shared the struggles over the prior six months—the library research, the prayer, and finally the conclusion that I had to stop prescribing the Pill despite my fears for my future in medicine. He was really kind, and apologetic that I had struggled so long alone. I was referred to a diocesan priest-theologian with a background in medical ethics.

I told the theologian that I knew that I couldn’t write the Pill anymore, nor IUD’s. However, I told him that I certainly saw no problem with barrier methods or sterilization—after all, they aren’t abortifacient and I couldn’t force my religious views on my patients. He told me that I really should stop prescribing or referring for any contraception or sterilizations, and that I needed to read Humanae Vitae to understand why.

I read Humanae Vitae, didn’t “get” most of it, but decided (for reasons I still don’t understand today) if I was going to try to be obedient, I would trust this theologian (and God) and go all the way. I told my partners during Holy Week 1996. They didn’t understand my decision, but accepted it.

Shortly after that, we moved to our current home in Charlottesville, Virginia—not due to the NFP issues, but it presented a whole new set of challenges. Richmond was a Diocese with little NFP presence at the time. If I was going to tell patients I wouldn’t prescribe the Pill, then I had to offer something to them. Thus I trained to become a NFP instructor.

Then we doubled our number of children with the addition of fraternal twin boys. With four sons age 4 and under, I stepped back to practicing one weekend a month, and embracing the role of stay-at-home mom—an unplanned gift at that point in my career.

The challenge of NFP only medical practice grew when I tried to re-enter practice part-time when the twins started preschool. Nobody else in Charlottesville practiced this way. I got to a second interview with one group—to be told that he could barely understand Catholics’ opposition to abortion, but having a doctor who would deny women birth control was more than he would allow. I had viewed that group as my last chance at a “normal” job, and I drove off the parking lot in tears. If God wanted me to practice this way, where was He right now?

God’s plans and His providence are perfect. My job was/is to stop being such a “control freak.” We were blessed to establish in a Dominican parish with priests who have been very supportive and willing to listen to me whine about the challenges without letting me off the hook. I ended up building a new family practice inside of the urgent care center where I had been working part time. My boss, though not Catholic, did feel that I had the right to practice the way I felt called.

I went through credentialing and practice setup with four children age 7 and under. Chaos reigned—at one point my dining room table was buried in documents. I deepened my devotion to St. Gianna Molla (my personal go-to saint as another doctor and mother of four) as I struggled to overcome barriers thrown in the path.

Over the years since, my practice has slowly grown, and I’m now working full time with three sons in high school and one in college. My office space actually includes a second-class relic of St. Gianna as well as a prolife Hippocratic oath (not the PC-versions used in med schools now) and a picture of St. Luke.

Why did God chase me so hard back in 1995-96? He had His reasons, and some of them are just becoming clear to me. I’m currently the NFP coordinator at a parish that taught about 1% of the NFP users in the nation (as reported to the USCCB) over the past several years—in SymptoThermal Method (instructors whom I have trained) and Creighton FertilityCare. For the past year, I am also the NFP Coordinator for the Richmond Diocese, and thus bring a medical perspective (and give priests more confidence in promoting these teachings.)

With the encouragement of friends, the financial support of my bishop and pastor, and the willingness of my family to survive two weeks of school, scouts, sports and band schedules without me—I just completed the NaPro Technology Medical Consultant course in Omaha. I have the background now to help women in ways I never knew were possible without the Pill or immoral treatments, with problems such as PMS, irregular cycles, and infertility. I share this knowledge with medical students from UVa (my alma mater) who do their family medicine rotation in my office.

My faith has deepened as well. As the theologian predicted years ago, I have grown to really embrace Humanae Vitae—life is a gift, and we need to have our lives be open to it, wherever it takes us. I’ve been encouraged through the Dominicans and their charism of study to explore other encyclicals such as Evangelium Vitae and my favorite—Veritatis Splendor.

Dominicans are about Veritas—the Truth. The teaching of the Catholic Church on human sexuality IS the Truth. In God’s providence, this journey led to my exploring the Lay Fraternities of St. Dominic—the Dominican “Third Order”—and making life promises in January, 2011.

I recently saw a quote from Bishop Fulton Sheen that applies to my strange journey. “We always make the mistake of thinking that it is what we do that matters, when really what matters is what we let God do to us. God sent the angel to Mary, not to ask her to do something, but to let something be done.”

For all the great things I wanted to do with my life and career, my most “successful” (hopefully in God’s eyes, anyway) moments so far are those which were never on my radar screen…when the Holy Spirit virtually hit me over the head to make sure His will somehow was done. I pray we all may be given always the grace to share Mary’s fiat—to let it be done. 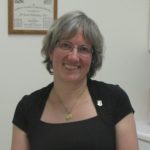 ::Karen is a family physician, wife, and mother of four teen sons (which also qualifies her as band/orchestra/cross-country/track/scout mom.). She is a life-promised member of the Lay Fraternities of St. Dominic–the Dominican “Third Order”, and the volunteer NFP Coordinator for the Catholic Diocese of Richmond VA. One of her proudest moments may be maintaining sanity through her twins’ simultaneous Eagle projects for their parish this spring.::