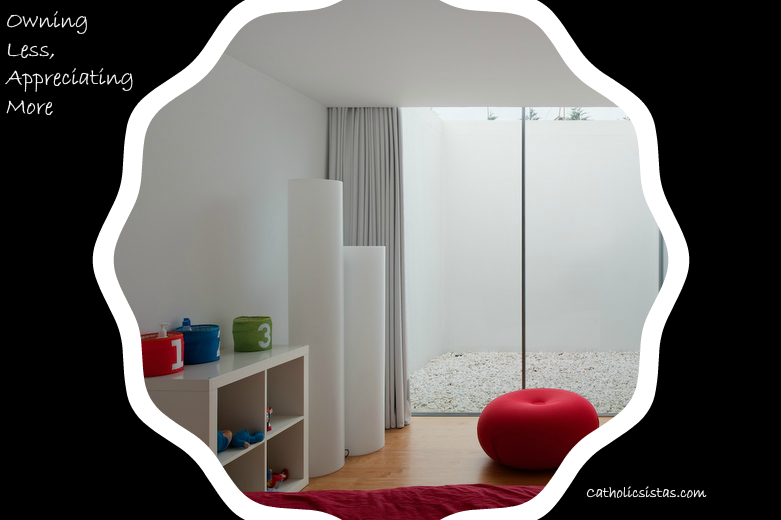 In March, I mentioned that I was going to participate in a decluttering challenge as one of my Lenten disciplines. Unfortunately, God had other plans for me this Lent. I had to have a tonsillectomy, which involves a somewhat long and painful recovery (how’s that for Lenten suffering?!). I barely was able to begin the challenge, much less complete it. However, the idea of getting rid of unnecessary possessions in my life had been on my heart for at least a year before that – though I was ignoring it for a while – and continued to pull at me once Lent was over.

Last month, I started reading an ebook about Minimalism (a lifestyle in which you own only what you need or love), and I got up from my computer, walked into my kitchen and started putting mugs, pots and pans, and kitchen utensils, into a box to donate. I committed to reducing my excess possessions, and made a plan with my husband as to how to go about it. So far, we have donated, thrown away, or recycled too many items to count (although I truly wish I had been counting!) from only a few of the rooms in our house. And we have only just begun. My husband and I feel a strong sense of liberation and relief every time we carry a container of stuff out of our house, and I can feel my overall stress level decreasing as the number of items in our house decreases.

I don’t remember how I first became interested in Minimalism. I don’t think it was largely for reasons related to my faith. I had practical considerations, particularly the fact that owning less means spending less time cleaning, organizing, and reorganizing. When my children’s toys were spread all over every room of the house, I would fantasize about getting rid of most of them because it would mean less stress and less cleaning up. However, it has become much clearer to me in recent months what Minimalism has to do with my faith. I am now seeing many connections between owning less, and living (and teaching my children to live) a truly Christian life. 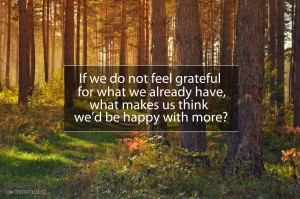 The first connection that comes to mind is that owning too much often means not being grateful for what we have. I’ve seen this in my children. The more toys they have, the less they take care of or truly care about any of them. At Christmas when they are showered by relatives with gifts, they don’t seem to appreciate any of them. They are just waiting for the next gift to open. Lately, they’ve been telling me they are bored, even though they have countless things to play with. They do not appreciate what they have, and I really can’t blame them for that; I don’t truly appreciate what I have either. To illustrate, how many times have I looked at my closet and dresser full of clothes and said “I have nothing to wear,” while there are many people who own only the clothes on their backs? Gratitude is fundamentally important to maintaining a right relationship with God and for developing empathy and a heart for service to others, and I believe that owning too much stands in the way of that.

The second connection is that de-owning helps us to detach from “things.” I said in my Lenten post that I never considered myself to be materialistic, but I do have an attachment to “stuff” (I think most people do). This is spiritually unhealthy. For example, I have often become angry at my children for accidentally breaking or otherwise ruining an object. When they fight over a toy or a certain beloved dish, I tell them that “people are more important than things”; but what message have I communicated to them when I’ve become angry at them for breaking something? The “thing” is so important that I’m willing to treat them poorly because of it? Whether we realize it or not, our attachment to material possessions can get in the way of truly loving others.

Scripture and the writings of saints are very clear that we need to be detached from possessions in order to serve God most fully. That doesn’t mean we all have to take vows of poverty. Rather, we have to internalize that our possessions are tools to aid us in serving God and each other, not goods for their own sake.  They certainly should not be roadblocks to holiness.

Think of the scriptural passage about the rich man who asks Jesus what he needs to do to inherit eternal life. Jesus tells him to sell all he has and give the money to the poor; but he cannot do it. This is someone who has always tried to follo 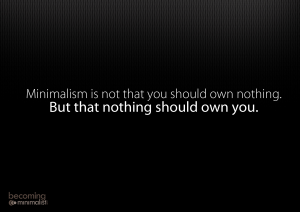 w the Law and seems sincere in his desire to follow Jesus, but is too attached to his possessions to do so. While I’m not rich by 21st century American standards, I am rich in comparison to many people in the world and probably most people throughout history (perhaps even the rich man in the passage). I not only have everything I need, which makes me more well-off than many, but so much more than I need. Jesus has not yet asked me to sell everything I have but are there tasks that he has asked of me that I haven’t done because I am attached to possessions? If Jesus DID ask me to give up everything for him right now, could I do it? I would like to say yes, but I think my “yes” will be much more confident further in the process of de-owning.

Lastly (for this post), the minimalist lifestyle is the antithesis of our consumerist culture. It’s “normal” and expected to buy tons of stuff that we don’t need. A society focused on producing, selling, and amassing unnecessary things is not a society that is focused on God or even on each other. Think about the horror stories each year during Black Friday and the entire Christmas shopping season about people’s despicable behavior toward each other in their quest to procure some unnecessary item at a bargain. Also, consider that people now look at large families as burdens on the world because of the alleged problem of “overpopulation.” The truth is that the problem is not overpopulation, but over-consumption; and instead of committing to consuming less, people commit to having fewer children and chiding those who don’t. “Things” are treated as being more important than people. I don’t want to be part of the over-consumption problem anymore, especially because I have a larger-than-average family.

I don’t believe that Minimalism is the only right way to live. I don’t even know if I will ever truly be a minimalist myself. What I do know is that the Lord has put this on my heart for a reason. I don’t want to be like the rich man and tell Jesus that it’s too hard to give up material things for him. The rich man not only forfeited his chance at Heaven, but also at living a truly joyful and meaningful life. And what does it profit a man to gain the world but lose his soul?