Our Lady of Guadalupe: More than an oversized truck decal

Disclaimer: The reference to the truck decal is not an admonishment of the use of the truck decal.  It is by my own personal experience that I knew of the image for many, many years because how prevalently displayed she is, like specifically on vehicles in my area.  However, I never knew the story behind the decal, so when I learned about it a couple of years ago I was simply astounded.  The title reflects my own experience in learning the great significance of Our Lady of Guadalupe.

In Texas, a good portion of our culture is directly influenced by the vibrant culture to our South, that of Mexico*.  We gorge on their food, love a good margarita, and find no child’s birthday party complete without a Sponge Bob pinata.  Among all those things we find iconic of the Mexican culture, we also find that funny image of Mary in the blue blanket with yellow squiggly lines behind her.  Why are there statues of Her in random front yards, and why is the image riding around on pickup trucks? 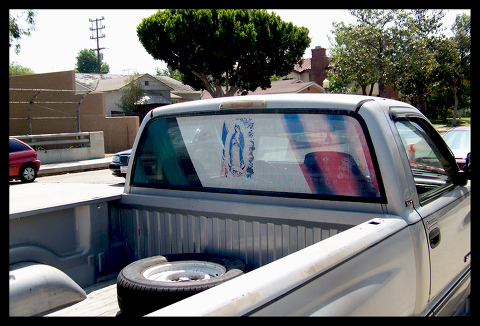 Our Lady appears to us on our highways! Photo By Debra de la Cruz.

To a large portion of Christians today, the Protestant Reformation of the 1500’s was the most defining time of Christianity since the Crucifixion.  In 1517, Martin Luther nailed his famous Ninety-five Theses to the Castle Church door in Wittenberg.  In the 1530’s, Luther was drafting the first doctrinal statement of the Lutheran church, Ulrich Zwingli was killed and John Calvin was shepherding Christians in his church in Geneva.  Interestingly, many students of the Reformation may not be aware that the 1500’s were equally monumental in Christian history for the people of Central America.  In 1531, God sent the Blessed Virgin to a little village outside of Mexico City to introduce Himself to the Aztec people and to show them the path to Himself and His Son.  “In only eight years, nine million people converted to the Catholic Church!  That’s an average of three thousand baptisms a day.  It stands as one of history’s most radical, monumental and rapid social transformations ever.” (Ron Tesoriero, Reason to Believe, pg 156).

Please check out Reason to Believe by Ron Tesoriero for more about the Virgin!

Allow me to give a very brief summary of God’s Guadalupe miracle.  Missionaries had been in the area for a while trying to convert the Aztec peoples to the ways of Christianity, yet, saw little success.  The Aztec beliefs were particularly troubling because they practiced human sacrifice (estimates are of thousands to hundreds of thousands per year).  However, God worked with what He’d accomplished through the missionaries, choosing (in His usual fashion) to call upon a very humble man already faithful to the Lord, Juan Diego.

In early December 1531, Juan Diego was on his way to Catechism class when he heard a woman call out to him from a little barren hill named Tepeyac.  Upon investigation, Diego found a beautiful lady who appeared as an Aztec woman and spoke to him in his native tongue.  Despite her ethnicity, Diego recognized the woman as Mary, the Mother of God.  She confirmed Her identity and instructed Diego to make an appeal to the local Bishop to build a church on Tepeyac.  Juan Diego had absolutely no stature to make such a request, but did what he could.  Surprisingly, the Bishop was somewhat receptive, but asked for proof of Diego’s encounter with the Blessed Virgin.

Diego did his best to avoid running into the Lady again as he did not feel fit for the job, but she appeared to him a few days later, on December 12th.  It was then She instructed him to go to the top of Tepeyac, gather the flowers growing there and bring them back.  No flowers would be growing in December, much less on Tepeyac, which was known to be barren.  Nevertheless,  there Diego found countless Castillian roses growing.  He bundled them up in his tilma (a sort of cloak made of cactus fiber) and he hurried to the church.  Once in an audience with the bishop, Diego opened his tilma for the beautiful flowers to cascade down, and was puzzled when the Bishop was more captivated by the tilma than the amazing flowers.  On the tilma, was painted the image of Our Lady cloaked in a blue starry mantle with sun rays bursting behind her.  To a people who communicated pictographically, a clear message of salvation was spelled out in the masterpiece’s details.

In the days to come, plans to build the church were made and many, many miracles happened at the site of Tepeyac.   When a few weeks later, on December 25th, a dead man brought before the tilma regained life, news and conversions spread like wildfire. 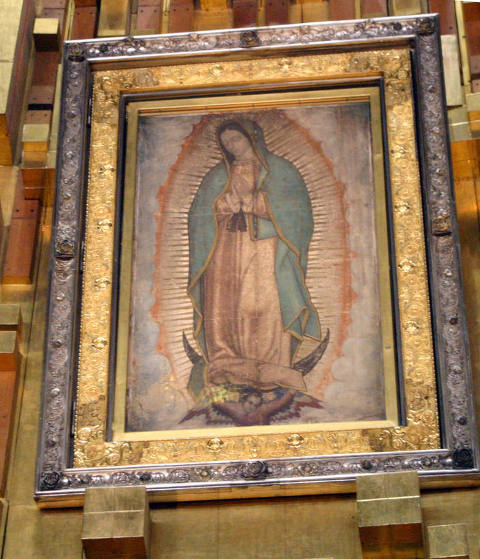 Now-a-days, this incredible story can be easily dismissed as fanciful folklore.  Stories like these only happen in the Bible, or in fairytale books, not in modern day real life.  However, God didn’t just use the image to convert the people of the 1500’s, He made sure that the tilma would be a source of evangelization for generations to come.

The 500 year old tilma is made of cactus fiber that has a longevity of about 20 years (meaning, it should have perished 480 years ago).  Despite the degradability of the fabric, the tilma hung freely for over 100 years without any protection from the environment, visitors, or candles before it was finally placed behind a thin protective glass casing.  The colors have never faded, and the fabric shows no signs of decay.  For reference, the American Declaration of Independence too was exposed to the elements for over 100 years before preservation measures were thought of.  However, by then it had already suffered damage from water, sun exposure and decay.  This 200 year old man-made document resides in a bulletproof, titanium case filled with inert argon gas.  Man needs titanium to protect his treasures, meanwhile God continues to astonish us with His protection.  In 1921, a large bomb was placed in a vase of flowers below the tilma.  The dynamite destroyed the church, blew out the windows, reduced the marble altar to rubble and mangled the large iron crucifix.  The target of the blast, the tilma, survived.  Its primitive glass casing wasn’t so much as even cracked.

Over the last 100 years, experts in many fields have investigated the miraculous tilma (including NASA researchers and a Nobel prize winner).  Researchers have been unable to identify the pigment used on the canvas, as the colors do not show to be made of any coloring agent, natural or synthetic, known to man.  The image has never faded, and has never been retouched.  Furthermore, upon close inspection, the pigment of the image does not actually reside in the cactus fibers of the tilma, instead the image hovers about 0.3 mm away from it (Reason to Believe pg 162).

Visitors say that the most memorable aspect of the Virgin is Her eyes, that they are genuinely lifelike.  This type of detail should be impossible to capture on crude cactus fiber.  The ability for such precision isn’t capable by the material.  Yet, in the 1950’s, photographic enlargements of the eyes showed the reflection of people, later learned to be Juan Diego, the Bishop and his interpreter, the three men who were gathered at the presentation of the tilma in 1531.  Lastly, in the mid 90’s, examination of the Virgin’s eyes by an ophthalmologist revealed that all of the proper parts of human eyes were present, “The eyes have all the characteristics of a human eye.  It has all the parts.  Around the pupil are contraction furrows which operate to contract the pupil in front of light.  These furrows were only detected by opthalmologic science in the twentieth century.  You can see the vascular supply in the upper eyelid of the right eye” says Dr. Jorge Escalante in Reason to Believe (pg 165).  If the image on the tilma holds secrets that could only be detected by technology 400 years later, imagine what other secrets She may be harboring for the unbelievers armed with even more advanced technology in the future?

Our Lady of Guadalupe is a conversion weapon of God’s that has proven effective over many, many generations.  While the Church struggled with sin and schism in the 1500s, God brought millions of new followers to Him through the Virgin.  Today, while the Church struggles to protect an ancient faith in the midst of man’s prideful technological advancement, we find that God is still showing us who’s Boss through the same evangelization tool.

So, next time you see the image of the Woman in the starry mantle with the sun glowing behind Her, remember why our Latin American friends are so fond of Her.  Just like at the Nativity 2,000 years ago, where God used His Mother to bring forth the Word Made Flesh,  Our Lord also used His mother to bring the Word of God to millions of people (and their children for generations to come) in the appearance of Our Lady of Guadalupe on December 12th, 1531.

“My belief in miracles cannot be considered a mystical belief: it is founded on human evidence, as is my belief in the discovery of America.  It is, indeed, a simple logical fact that hardly needs to be recognized or interpreted.  The extraordinary idea going around is that those who deny the miracle know how to consider the facts coolly and directly, while those who accept the miracle always relate the facts with the dogma previously accepted.  In fact, the opposite is the case: the believers accept the miracle (with or without reason) because the evidence compels them to do so.  The unbelievers deny it (with or without reason) because the doctrine they profess compels them to do so.” – G.K. Chesterton in Orthodoxy.

In addition to Reason to Believe, see also http://www.maryourmother.net/Guadalupe.html.

* Originally published with “Central America” instead of “Mexico”, which is incorrect as Mexico is in North America.